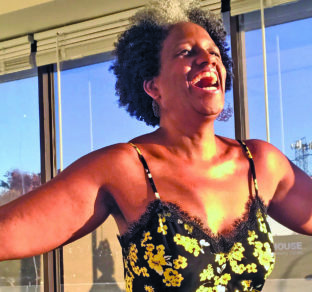 In a cozy, second-floor studio at Long Reach Village Center in Columbia, where the walls gleam with a fresh coat of white paint, artist Stacey Berger stepped back from a collage to gain perspective. She gazed at the meticulously arranged, diamond-shaped pieces of orange and blues.

“I tore pages out of National Geographics and cut them into strips,” explained Berger, surrounded by the tools of her craft: acrylic paint, cotton swabs and a color wheel. She is using old-fashioned super glue to affix each piece to a board, a process that takes hours. “That’s my project for the rest of the afternoon.”

Behind her rests an easel where Berger is putting the crowning touches on a floral scene with a brilliant orange border. A few steps away, in a small kitchen, sits a rack brimming with her finished works, along with material for future projects — an assortment of rags that were once her husband’s shirts.

While honing her artistic gifts, Berger, who lives in Clarksville and practices law in downtown Columbia, is doing her part this year to advance a broader plan sponsored by the Howard County Arts Council to help reenergize the sagging retail complex.

Once a thriving hub anchored by a Safeway store, Long Reach has faded since its heyday from the 1970s through the 90s. Its short list of tenants today includes a liquor store, laundromat and a Howard County Police satellite station.

Yet, the shopping center gained some new tenants this year: Fifteen artists moved into recently renovated studio space, and a museum opened there last spring.

“Urban and cultural planners across the globe recognize that the arts have the power to transform communities into special places — and have used creative placemaking as a strategy to revitalize cities and neighborhoods for decades,” said Coleen West, executive director of the Howard County Arts Council.

Six years in the making

The new studio space signifies the culmination of years of effort. Since the Re-Imagine Long Reach Village Center campaign was unveiled in 2014, the Arts Council has been an integral partner.

In early discussions, the county and the arts organization talked about the feasibility of relocating the Arts Center to Long Reach. Reaction from all parties involved, West recalled, was positive.

Buoyed by the community’s positive feedback, the arts council teamed up with a consultant hired by the county to assemble a needs assessment in 2015.

With momentum building to reinvigorate the retail center, the county tapped a private developer to drive the project.

However, the plan fell through, West recalled. So “the county reached out to us again to see if we were interested in creating a studio program in conjunction with their new Long Reach Rising strategy.”

West’s answer was yes. The opportunity to host programs ranging from arts and culture to economic enrichment made sense, she said, and the project moved forward.

Many of the artists began moving in on October 1. Other artistic types, including a cook and a tie-dye maker, moved into the Long Reach Village Center earlier this year.

In addition, the African Art Museum of Maryland, established in 1980, expanded this year, moving from its previous 900-square-foot space to a 1,400-square-foot area in the center. The museum celebrated a ribbon-cutting ceremony for the new exhibit space in May.

“We are going to be the talk of the town,” museum director and co-founder Doris Ligon told the Baltimore Sun.

West explained that the facility features three suites that, when full, will accommodate 16 artists. Four of the current artists in residence are 50 or older.

Both professional and emerging artists are welcome to apply to lease a studio. Mediums the artists will work in include watercolor and acrylic painting, drawing, fiber, film and digital media. Studios range in size from 120 square feet to 187 square feet; monthly rents average $80 to $125.

Services at Long Reach feature 24-hour access to studios, heat, air-conditioning and access to water and “abundant natural light,” West said, along with a “convivial, supportive working atmosphere with other professional artists.”

Now, even in a pandemic, when careful consideration has been given to adhering to state and local protocols, the Long Reach Village Center studios are thriving.

“Artists do tend to rely on each other,” Berger said. “If I need to ask a question, I can interact with others and get input. Adding an extra color somewhere can make a big difference.”

A place to be an artist

For Berger, who is in her 60s, the studio offers a sanctuary, a self-contained landscape to decompress after clocking long hours in a profession that guarantees its share of stressful scenarios.

Art can be a lot harder, however. “There’s so much more to learn than practicing law. In law, there are more boundaries,” she said.

Berger first dabbled in art as a child, growing up in the suburbs of Philadelphia.

“I remember my mother lining up water glasses and [empty] jars of food with different paint in them,” she said. “My mother would save them, and I would stick my brushes in them.” And there was always a glass reserved for turpentine, she added.

As an adult, Berger set aside art activity in order to tend to her family and to her law practice. But her interest was reignited 15 years ago.

While her son was taking after-school drum lessons in Silver Spring, she put the three hours to good use by attending an oil pastels class. From there, she branched out to acrylic paints and never stopped.

Filmmaker to move in

Another artist who is excited about all the possibilities at the studio is Pamela Woolford, who moved in on Oct. 2. The Columbia resident, 53, is an award-winning writer, filmmaker and performer.

“I will be writing, editing film, choreographing, and dancing in that space,” Woolford said, the excitement building in her voice. “I feel very honored to have that space. It ties in much more with my roots here in Columbia.”

Woolford, whose short fiction was twice nominated for a Pushcart Prize, has produced films such as “Generation” and “Interrupted: Prologue to a Mem-noir.”

Having her own space at Long Reach, she said, “is a lovely idea. For me, as someone steeped in the arts, I feel they bring great advantage to the community. They unite people. We are carriers of the culture.”

West, who has overseen the county Arts Council since 1997, graduated from the Minneapolis College of Art and Design and went on to earn a master’s degree with a concentration in museum design from New York University.

“While living in Brooklyn,” she commented, “I worked at a number of cultural institutions, most notably the Museum of Modern Art, New York University Welcome Center and the Alternate Museum.”

West emphasized there is a critical need to identify additional studio, gallery and theater space in the county. Joint efforts between the county and the arts council to offer programs similar to what’s taking flight at Long Reach “are important to our ability to achieve these goals.”

Asked to share advice for aspiring artists to get them creating, Berger mixed the colors of passion and pragmatism.

“Just do it,” she said. “What have you got to lose? Nobody’s judging you. You don’t have to make a masterpiece.”

Correction: In the print version of this story, Pamela Woolford’s film was misidentified as “Art as a Response to Anti-Blackness,” an event held to promote the film. The correct title of the film is “Interrupted: Prologue to a Mem-noir.” We regret the error.