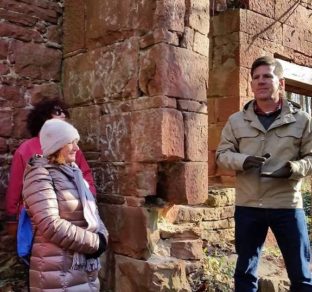 Author and licensed tour guide Garrett Peck had to put his historical walking tours of the D.C. area on hold due to the pandemic, but has started offering virtual ones instead. His most recent book, A Decade of Disruption: America in the New Millennium, was published in June. Photo courtesy of Garrett Peck
PRINT

Normally at this time of year, author and historian Garrett Peck of Arlington, Virginia, would be leading his popular walking tours throughout the greater Washington area, and having a drink with the participants afterward. Now, due to the pandemic, he’s had to go virtual.

Since then, he has written a number of books on historical topics, each time adding a walking tour on the subject to his repertoire.

In addition to researching for his books and tours and lecturing on those topics at the Smithsonian, the National Archives and the Library of Congress, Peck also holds down a day job. He was an analyst at Verizon until 2016, and now works for the Charities Aid Foundation of America, a nonprofit that facilitates international philanthropy.

He credits his ability to accomplish everything on his to-do list on working from home and not having to commute. While many of us have experienced this in recent months, Peck has been working this way since 2002.

“It essentially allows me to have a 26-hour day,” he said. “There are fewer distractions.”

In the last 11 years, Peck has published eight books, including his most recent one in June called A Decade of Disruption: America in the New Millennium. It’s an analysis of the first decade of the 21st century, from the dot-com meltdown to the Great Recession.

Of his prolific output, he said, “You finish one project; you just keep going…I’ve got a list of books [to write].”

Long before he started writing books, Peck was fascinated by history. At 16, he decided to leave his hometown of Sacramento, California, to spend a year studying in Germany. His grandparents are from there, and he wanted to become more familiar with his family’s heritage.

After high school, Peck chose to attend the Virginia Military Institute, partly because of its proximity to many Civil War landmarks. Plus, he said, “Being a teenage rebel, I wanted to move to a different part of the country.” (As for attending a military college, he acknowledged in hindsight, “That’s not much rebelling.”)

He graduated in 1990 with a bachelor’s degree in history and German, and was one of the first students there to earn a minor in international relations.

Peck then worked in the U.S. Army as a liaison to a German army unit from 1990 to 1994. In 1996, he received a master’s degree in international affairs from George Washington University and started working in telecommunications.

The history of drinking

Peck got the idea for his first book around Christmas Day in 2003, when he brought his grandmother a bottle of wine. “My grandmother pointed to the red wine and said, ‘I don’t drink; you should know that by now,’” Peck said.

His grandmother was born in 1913, six years before the ratification of the 18th Amendment, which prohibited the manufacture, transportation and sale of alcoholic beverages in the United States starting in 1920. “Her generation was taught to be ashamed of drinking,” Peck said.

Peck began to think about how much alcohol consumption had changed in three to four generations. “My mother and I were never passed on that [secretive drinking] ethic,” he said.

So, he decided he wanted to write a book on the topic. But how was a first-time author to find a willing publisher?

In 2006, to prove to publishing companies that he was qualified to write such a book, Peck began offering a three-hour walking tour of Prohibition-related sites in the District. Three years later, he successfully published his first book.

He found he loved the part-time job as a tour guide, and since then has offered a personal tour to explore the history of each of the books he has written.

Those in-person tours are on hold for now, but one tour, “Jazzy Nights in Washington,” went digital last month. Peck prerecorded a narrative about each site, provided pictures, and gave a live lecture on Zoom. The first one, available online through Smithsonian Associates, quickly sold out.

In his most recent book, A Decade of Disruption, Peck dedicates a chapter to the changed circumstances facing today’s retirees.

On one hand, developments in technology and medicine have led to healthier and longer lives. On the other, our steadily increasing longevity is putting financial pressure on governmental programs like Social Security and Medicare.

“Our society is getting grayer,” Peck said. “Now you might have 20 to 30 years of retirement.”

Peck watched his mother change her mind about retiring in 2000 after the dot-com bubble burst and high-flying stocks plummeted. Instead, she decided to continue her career in mental health therapy, but worked part-time.

She enjoyed it so much that she continued to work for another decade. “It’s actually a good model,” Peck noted. “Find something you enjoy doing,” and keep at it.

Fortunately for him, Peck has already found his passion: being a tour guide. As soon as it’s safe, he plans to restart his walking tours. “I want to continue to do it until my 90s.”

In the meantime, with the success of his first virtual tour last month and another one coming in September, he should be able to do that from home, too.

A Decade of Disruption: America in the New Millennium, published in June, is available on Amazon for $28. For more information, visit garrettpeck.com.