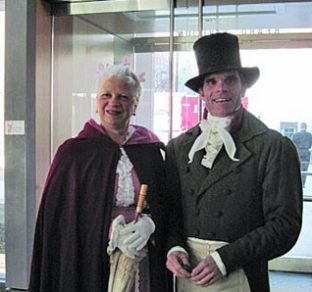 Sonia Socha and Alan Gephardt have spent 25 years portraying Francis Scott Key and his wife Mary at events throughout Maryland. They have been particularly popular in recent years, with the 200th anniversary of the War of 1812, during which Key wrote “The Star-Spangled Banner.” Photo courtesy of Alan Gephardt
PRINT

Alan Gephardt and Sonia Socha may not be husband and wife in real life, but they have portrayed a real married couple for the past 25 years.

As Francis Scott Key and his wife Mary, the two have appeared throughout Maryland at living history re-enactments, festivals, museums, classrooms and more. Their interactive historic interpretations bring this 19th century “power couple” to life for 21st century audiences.

Though this is an “avocation, not a vocation,” said Socha, she and Gephardt have fully embraced the lives of the Keys. They feel they have gotten to know them intimately from researching the history of the time, reading personal correspondence, visiting their family homes, even meeting some of their descendants.

Among the interesting facts: Before Francis Scott Key became known as the author of The Star Spangled Banner, he was a prominent Georgetown lawyer who often argued cases before the U.S. Supreme Court. He also was something of a diplomat.

In 1814, toward the end of the War of 1812, he was sent on a mission approved by President Madison to rescue a Maryland physician who had been arrested by the British and imprisoned on of their ships anchored in the Chesapeake Bay. Key, assisting the American prisoner of war exchange agent, negotiated for the captive’s release.

The British, having completed a successful invasion of Washington, D.C., began an attack on Baltimore while Key was aboard ship. Together with the exchange agent and the doctor, Key first watched the unsuccessful British attempt to invade Baltimore by land via North Point, then the “rockets’ red glare,” as the British began their bombardment of Fort McHenry.

His drafting of the poem that was to become our national anthem also took place on the ship.

“Not many people today know that Key was such a well-known attorney,” said Socha, whose “day job” is serving as executive director of the South Baltimore Learning Center.

And who was Mrs. Key?

Mary (aka “Polly”) Tayloe Lloyd met her future husband in 1797 when she was 13 years old and he was 17. Although Francis (who went by “Frank”) was smitten by her beauty and stately bearing, Polly tore his poems into curling papers for her hair.

Like Key, Lloyd came from an established and wealthy family; her great-grandfather had been Royal Governor of Maryland. Her childhood home, now known as the Chase-Lloyd House, still stands in Annapolis, as does her family’s summer plantation on the Wye River.

Francis Scott Key valued Polly as a good wife, a loving mother to their 11 children (!) and an efficient manager of their large household staff.

On the other hand, she was often described as haughty and proud, and very conscious of her aristocratic ancestry. Her views did not always agree with the democratic spirit of the early 19th century.

“Key ‘married up’ when he married into the Lloyd family,” said Socha. “She was from the wealthiest family in Maryland.”

Anchored in the past

“I find Francis Scott Key himself and the story very interesting,” said Gephardt. “Here was a man who was a trained lawyer and an amateur poet who finds himself on a ship watching events unfold that led to his writing what would become our national anthem. It’s almost serendipity.”

Ironically, Gephardt observed, Key was opposed to the War of 1812 and found it both foolish and immoral. “It’s a twist of fate that he felt that way and still wrote what became our national anthem” based on a battle of that war, he said.

When appearing as Mr. and Mrs. Key, Gephardt and Socha wear period clothes, sometimes performing as the Keys themselves, sometimes giving a more formal presentation.

Socha’s journey to becoming “Polly” began in 1987 when she was working at Dundalk Community College. The college president received a call from the executive director of the Chamber of Commerce wanting to “borrow” Socha for several weeks to implement a historical re-enactment. Though that wasn’t her area of expertise, she was an experienced event planner so she agreed.

Two years later, the Francis Scott Key Foundation asked for “Francis Scott Key” to appear at a groundbreaking ceremony for its new park in Georgetown (the site of the Keys’ home). Socha accompanied Gephardt to the ceremony, and the Foundation decided that at its next event at the Smithsonian, Mr. Key needed a “Mrs.”

Socha threw herself into the research and even had period-appropriate clothing made for the occasion. Since that time, she and Gephardt have appeared together as part of the Living Flag Celebration and Defender’s Day events held every year at Fort McHenry, in addition to making presentations at local schools, historical societies, and events in Annapolis and Frederick.

They have also accompanied the original manuscript of the “Star Spangled Banner” from the Maryland Historical Society to the Miller Senate Building in Annapolis.

Though Socha and Gephardt don’t have as much time as they once did to portray the Keys — their full-time jobs keep them well-occupied — neither wants to give up the “companions” who have accompanied them during the last quarter-century.

“I find him to be an admirable human being,” said Gephardt of Francis Scott Key. “He was a person of faith, dedicated to improving American society, sincere, kind-hearted and affectionate. I think he would have been a very interesting person to meet.”

Gephardt tries to end every presentation with a recitation of all four verses of the “Star Spangled Banner.” Every time, he finds a different meaning.

“The words speak to me in different ways at different times,” he said. “I find that very compelling, and one of the reasons I continue doing this.”

Most recently, “Mr. and Mrs. Key” helped celebrate the “Star Spangled Spectacular,” commemorating the 200th anniversary of the national anthem.