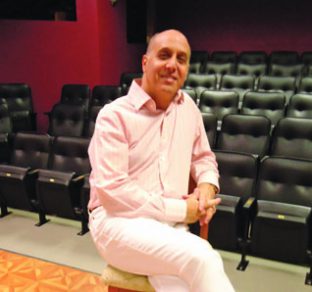 “I love working with a theme,” Ron Celona, artistic director of the Coachella Valley Repertory Theatre, said at the Atrium in Rancho Mirage. Heading into his fifth season, the lineup focuses on “The American Melting Pot,” a look at four cultures by prominent playwrights.

Last season highlighted works by Terrence McNally with great success. “Master Class put us on the map.” For 2014-15, Hold These Truths — the Journey of Gordon Hirabayashi by Jeanne Sakata (April 15 to May 3), initially motivated Celona. It tells the plight of Japanese Americans interned after Pearl Harbor. Hirabayashi, later an attorney, spearheaded financial retribution for the victims.

Leading off on Oct. 29 (through Nov. 16), The Chosen by Aaron Posner and Chaim Potok contrasts two different Jewish communities, ”five blocks and a world apart in Brooklyn in the 1940s.” Having Our Say, a century-spanning perspective of American history through the eyes of the remarkable sisters Sarah L. (103) and A. Elizabeth Delany (101), runs Jan. 21 to Feb. 8.

A comedy, the English translation of La Gringa by Carmen Rivera (March 4 to 22), revolves around Maria, who finds herself at home neither in the U.S. nor Puerto Rico. Celona said “It’s the second longest-running off-Broadway show in history because it’s performed in Spanish.”

“My first and last love has always been the stage,” Celona said, though he’s worked in movies and television. Just out of high school at 18, the Philadelphia youth couldn’t wait to get to New York.

“I started as a song and dance man, happy in the chorus — until I began to lose my hair. You can’t have a bald chorus boy.”

He trained at the American Musical & Dramatic Academy in New York, and continued to study theater at Cal State University Los Angeles, after moving west in 1984. The desert was his destination in 1999, and he spent nine years as artistic director of the Arthur Newman Theatre at Joslyn Center in Palm Desert, offering crowd-pleasing productions.

He sees the role of a repertory theater to be “edgy, thought-provoking, to take risks. To allow actors to grow. To stimulate and educate the community.”

And he doesn’t take the hot summer off. Activities continued, including the acclaimed reading of Happy Hour by celebrity Gavin MacLeod, with local actor Michael Shaw holding his own.

Auxiliary programs, like outreach to children, and the sold-out Luminary Luncheons continue. They’ve been hosted by such notables as Tab Hunter, Adam West, Carol Channing and Ruta Lee. The food, by the way, comes from the Acqua Pazza/LuLu California bistros.

CV Rep has earned a lot of support from the community. Celona looked around at the intimate little theater, seating 86. At first there were plastic chairs. Celona smiles, remembering that philanthropist Harold Matzner of Palm Springs had looked askance at them when a fundraiser was being planned. “You gotta get new seats.” The director rejoined “So are you gonna buy them for me?” He did.

The company has flourished to the point “that we can have a staff of four employees — that’s rare in little theater.” All actors are paid, not just the union members. Marina Re, who was born to play Maria Callas in Master Class, was transported from New York. Actually, Celona would like to see more valley actors show up for auditions.

Celona has a dream. “We already have the grande dame of theaters, the McCallum, with its road shows and headliners.”

But wouldn’t it be wonderful for CV Rep to build a proper playhouse, like the Pasadena Playhouse? He’s working on it.