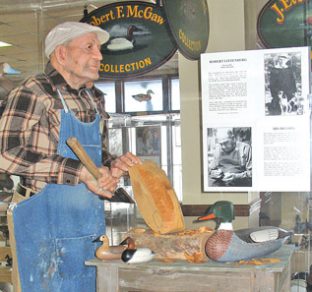 On the banks of the historic Susquehanna Flats is the Havre de Grace Decoy Museum, housing one of the country’s most extensive collections of working and decorative Chesapeake Bay decoys.

The museum was established in 1986 as a private, non-profit institution dedicated to preserving the historical and cultural legacy of waterfowling and decoy-making on the Chesapeake Bay.

Tours, lectures, demonstrations, special events and a series of exhibits that range from single display cases to room-sized waterfowl displays communicate the heritage of Upper Bay decoy-making to a national audience of waterfowl enthusiasts.

One of the highlights of the museum’s special events is the annual Decoy and Wildlife Art Festival, to be held this year from May 6 to 8.

The festival will feature more than 140 artists exhibiting and selling their works, food, live and silent auctions, retriever demonstrations, carving competitions and more. An outdoor hunting show will be held at the Havre de Grace Activity Center.

More than decoys on display

Decoys have been a central element of Chesapeake Bay culture for centuries, explained Margaret Jones, who coordinates the museum’s special events.

In the beginning, decoys were made for one purpose — to lure waterfowl within range of the hunter’s shotgun. Decoys were simple, utilitarian representations of ducks and geese, rough-hewn from wood. “No one considered them art,” said Jones.

Today, decoys lure far more people than they do waterfowl. “You’re more likely to find a decoy adorning a collector’s mantelpiece than floating in a hunter’s rig,” said Jones. That’s why contemporary carvers produce sophisticated works of art with century-old skills that have been passed down from master to apprentice for generations.

The Decoy Museum’s collection consists of approximately 2,700 objects, most of them wooden decoys dating from 1930 to 1990, and representing the work of more than 300 regional decoy-makers.

In addition to decoys, the museum owns decorative carvings, boats, guns, textiles, books, documents and photographs. According to Jones, nearly three-quarters of the museum’s collection is open to the public via its exhibits.

While major displays are geared to showcasing vintage and contemporary decoys, their makers and the production process, much attention has been given the hunting tradition that gave birth to the decoy.

An extensive collection of the instruments once used in carving “counterfeit” wildfowl, as well as many of more recent vintage and still in use, is on display.

Showcased also are shotguns of gauges unheard of or outlawed today, punt guns the size of small cannons, and other tools for the massive harvest of waterfowl when it was plentiful, in demand, and had few legal restrictions.

Decoy capital of the world

There are four permanent exhibits, plus temporary exhibits that are changed every three to six months.

The museum’s main gallery exhibit, “What is a Decoy?,” tells the story of this American folk art tradition, recounts how talented men carved “floating sculpture,” contains examples of working decoys from various flyway regions, and explains why Havre de Grace is known as the “Decoy Capital of the World.”

“Gunning the Flats” explores the history of waterfowling on the Susquehanna Flats, an area long noted for its bounty of waterfowl. By the 19th century, sportsmen from all over the world came to the Flats to pursue canvasback ducks, and many of Havre de Grace’s citizens supported their families by hunting waterfowl and selling them to Baltimore and Philadelphia restaurants.

This exhibit places decoys within their historical context by investigating the tools and techniques used by local hunters throughout the past two centuries for both market and sports hunting.

In “Honoring the Masters,” the Decoy Museum recognizes the extraordinary achievements of prominent carvers. Occupying the entire second floor gallery, this exhibit displays a full range of the works of masters such as Steve and Lem Ward, Charlie Bryan, Bob Litzenberg, Paul Gibson, Evans McKinney and others.

“Honoring the Masters” allows visitors to analyze and compare the styles of the area’s great carvers while enjoying the scenic vista of the Susquehanna Flats from the second floor gallery.

The last permanent exhibit is the R. Madison Mitchell Carving Workshop. Mitchell (1901-1993) is universally recognized as one of the masters of the Havre de Grace style of decoy carving. His simple yet elegant style dominated the decoy market for most of the second half of the twentieth century, and continues to be reflected today in the works of the many carvers who trained with him.

Free shuttle buses are available to all show locations and to downtown Havre de Grace. Admission is $8, and the ticket is valid for the entire weekend. Children 12 and under are free when accompanied by an adult.

Museum membership starts at $25 per year for individuals and $40 for families. Members receive free admission, discounts at the gift shop, and a subscription to the museum’s magazine The Canvasback.