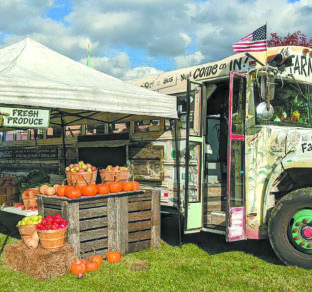 Since 2009, Mark Lilly, owner of Farm to Family CSA, has been driving a converted school bus known as the Farm Bus. Lilly drives hundreds of miles a week, picking up fresh produce, meat and dairy products from local farms and transporting them directly to homes and pick-up points in RVA and Washington, D.C. Photo by Mark Lilly
PRINT 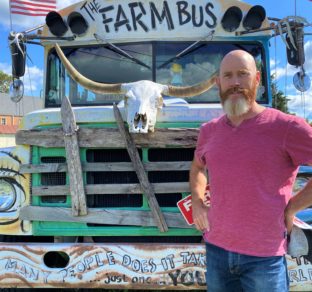 Mark Lilly is shown with his repurposed old school bus, which is like a farmer’s market on wheels. He started his business, Farm to Family, 11 years ago, but he’s been busier than ever since the pandemic hit. Photo Courtesy of Mark Lilly
By Diane York Posted on November 19, 2020

The turning point in Mark Lilly’s life came in 2008, when the former Marine decided to take a course at the University of Richmond, where he worked.

As part of the emergency management class, titled “Hazards and Threats of the Future,” Lilly had to create a 20-year projected scenario of a disaster; in his case, famine in the West in the year 2029.

When he predicted a pandemic that would lead to a crisis in the food supply, he never imagined he would actually experience it.

Today, Lilly is an outspoken advocate for food security and Community Supported Agriculture (CSA). He’s best known for his “Farm Bus” — a mobile farmers’ market selling produce, meats and other products from local, small farms direct to families. He and the bus have been featured on BBC World News, the “Rachael Ray Show,” CBN News and in People magazine.

This year, Lilly and his Farm Bus have seen a lot of action, traveling all over Virginia and Washington, D.C.

“We want to transform Richmond, raise food, educate people to be empowered and food secure — and most importantly, create jobs,” Lilly said.

“We can’t make the positive changes to our current toxic food system unless people make a conscious effort to engage with their local food producers and providers. The alternative is not sustainable. We all have to take action now,” he said.

From Marine to entrepreneur

Lilly grew up in Richmond, joined the Marines, then attended Virginia Commonwealth University. After earning a Bachelor of Fine Arts, he backpacked across Europe solo.

“I wanted to experience everything I could while I was young,” he said.

When he returned and starting working as a manager in the dining service at the University of Richmond, he took the course offered there in disaster management. In his imagined scenario, Lilly predicted a pandemic and the food crisis it might trigger.

What he learned during the project shifted his life. It taught him that our food supply in the U.S. is contingent on a few mega-corporations. They’re too big to fail, but if they did, we would be unprepared to quickly find alternatives.

In Lilly’s mind, the answer to this threat was to increase the profitability of the numerous small farms that dot the Virginia landscape. He decided to start making it easier for local farmers to sell directly to families.

In 2009, Lilly started his business — Farm to Family — to bring attention to these problems, maximize the use of local small farms and help them thrive.

He said he used his “last pennies” to buy an old school bus and retrofit it as a traveling market. Stocked with food, including meat, breads, fruits and vegetables from small farms, he drives it directly to consumers.

Bringing food to many, Lilly also used the bus as a teaching tool to bring the concept of local and sustainable farming to schools across the state.

“Farm to Family has the potential to circumvent many issues with local food distribution and awareness. It is the future,” he said.

Sustainable agriculture, Lilly added, “will only grow in demand and popularity as consumers become more conscious of issues with conventional food growing methods and the industrialized food complex as a whole.”

The importance of sustainability

What is sustainable agriculture? At present, Americans get much of their fruits and vegetables from California and Florida. However, in winter, we rely on Central America and Mexico for produce. We raise most of our own meat, but import about 20% from other countries.

During a war, plague or environmental disaster (such as extended drought, fires or floods), we might not be able to rely on food from other countries.

The world heavily relies on just a dozen plants and five animal species, according to National Geographic magazine. Therefore, small farms that grow heirloom breeds without GMO (genetically modified organisms) can establish pockets of biodiversity and “islands” of pure plant and animal stock.

These are critical in case of potential disease or widespread failure of GMO breeds. The value of smaller, local farms is that, while providing additional support now to our food chain, in a crisis, they would be able to sustain a supply of fruits, vegetables, grains, beef, poultry, eggs and dairy.

And when meatpacking factories temporarily closed due to COVID-19, it was a boon for small cattle, bison, chicken and pig farmers.

In 2020, after 10 years in the business, Lilly is having his best year ever. Overnight, he had to expand, hiring helpers and buying another truck.

When the pandemic is over, Lilly suspects some new customers will stick with his delivery model, while others will go back to shopping at large grocery stores. However, he hopes they will also shop at his small store/urban farm and garden on Mechanicsville Turnpike, called the Farm to Family Market.

What the Farm Bus delivers

Lilly’s business is not confined to the summer season. He sells a wide variety of winter vegetables (collards, kale, squash, pumpkins, carrots and beets) along with meat, cheese, milk and breads.

He drives all over the state, picking up products from as far as the Shenandoah Valley to get a varied inventory.

A weekly delivery to a household might include the following items, based on the season: three ears of corn, four sweet potatoes, two pears, six apples, two squashes, two bell peppers, bok choy, green onions, kale and a pint of berries.

Customers can add bread, their choice of meat — bison or beef burgers, lamb, chicken or trout — or dairy products — milk, yogurt and/or cheese, as well as home-canned jams and other pantry items.

When he’s not transporting food, Lilly is a sought-after speaker on food security. Along with his wife, Suzi, he heads the Richmond Mayor’s Food Policy Council Sub-committee on Food Security.

In his public speaking appearances, Lilly hopes to inspire others. His mission, he said, is “to create a local, regenerative, highly resilient model that others can follow.

“Our goal is to support and sustain a local food system and uplift our communities through local food.”

Farm to Family offers weekly and biweekly subscriptions to its CSA program. All food and products are grown and sourced within 150 miles of Lilly’s store at 2817 Mechanicsville Turnpike. Delivery is available for $10 to those within five miles of the store. Several area pick-up locations are also offered.