Go back in time to solve these mysteries 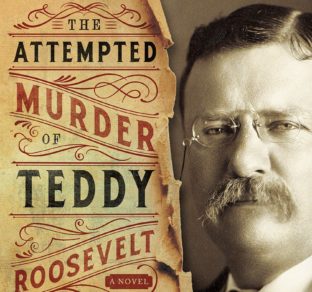 Historical thrillers are sure to keep you occupied and your mind engaged. Follow these canny sleuths who solve crimes of the sort that mesmerized the public in previous times.

Theodore Roosevelt assumed the presidency upon the assassination of William McKinley in 1901. The following year, a collision in Pittsfield, Massachusetts, between an electric streetcar and the carriage in which Roosevelt and his party were traveling, ended in tragedy. A Secret Service agent was killed, and Roosevelt was injured. The incident was deemed an accident.

Septuagenarian author Burt Solomon has written a well-researched speculative account of this episode as if a conspiracy to assassinate Teddy Roosevelt was behind the “accident.”

In the novel, President Roosevelt asks 63-year-old Secretary of State John Hay to investigate the circumstances of the collision and uncover what TR presumes was a plot to kill him.

Solomon, a resident of Arlington, Virginia, and retired reporter who covered the White House, skillfully weaves into his narrative the tenor of the times, the contemporaneous events of the day, and a rich description of the District of Columbia at the turn of the 20th century.

The Attempted Murder of Teddy Roosevelt is written from the perspective of John Hay as he pieces together the clues of the puzzle — and becomes the target of assassination himself. Visit Lafayette Square, Union Station, the New Willard Hotel, Capitol Hill and what we now call Roosevelt Island as they existed more than a century ago.

In 1873, a calling card left at eight deadly crime scenes leaves a trail of unsolved murders that otherwise appeared to be random. Nineteen-year-old Sherlock Holmes applies his keen powers of observation to solve the mystery.

Sherlock must convince his older brother, Mycroft, who is his sole financial support, to allow him to abandon his studies at Cambridge and follow his calling. Mycroft and Sherlock comes to a surprising resolution, resolving all the mysteries, murders and mayhem and identifying the murderer, motives and villains.

Kareem Abdul-Jabbar, now 73, and co-author Anna Waterhouse imagine the young Sherlock as he embarks on his storied career as chronicled by Sir Arthur Conan Doyle. The NBA great is a self-described Holmesian. This is his third novel, all revolving around the young brothers Holmes.

The multicultural cast of characters includes a wealthy black colleague of Mycroft who hails from Trinidad, a Chinese shipping magnate and a Turkish arms dealer.

Travel to the royal palace, the watering holes for the rich and powerful, the Irish slums of London and the small towns and seaports of England, all from the comforts of home.

Mayhem and murder, secret clubs and seductive charmers, corrupt policemen and crafty criminals — master mystery writer Martin Edwards blends these elements into a riveting story. The award-winning British author, who is in his mid-60s, has crafted an enthralling tale set in London and its environs in the early 20th-century.

Follow cub reporter Jacob Flint as he follows a trail of shocking crimes. See beneath the facade of upstanding British upper-crust society, and wander along the streets of the capital city — its squares and haunts, restaurants and theaters, exclusive clubs and out-of-the way cottages.

Visit the charming countryside and mysterious offshore island. Enjoy unraveling the mystery with the aid of flashbacks and meager clues strewn along the way.

Edwards, a lawyer and crime-fiction critic, has been penning historical thrillers since 1991 — many in the form of short stories. He is a talented writer able to paint a mood, describe a landscape, define character and weave conversation into a taut narrative and a complex, compelling story.