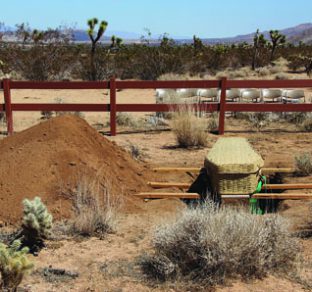 It’s likely you’ve given some thought to what you would like to have happen to your body after you die. You may have decided a traditional burial that involves embalming, a steel casket and a concrete vault just isn’t for you.

Yet the idea of cremation doesn’t sit quite right either. The relatively recent emergence of a practice known as a “green burial” might be something for you to consider.

Of course, the idea of a green or “natural” burial isn’t exactly new. Even the most cursory ancestral review reveals it was once a very common practice. That’s what led retired Hollywood make-up artist Joyce Westmore, who is Mormon, to decide to pre-plan her own green burial.

“The more I looked into it and thought about the lineage I come from — which is a lot of people were just buried by the trailside when they were coming across the states — I thought that’s how everybody has been buried anyway except for the last few years. So I thought, hmmm, why don’t I just go that route? Because it’s simple and it’s fast, and it’s a nice way to go. I think it’s very humane,” she says.

A green or natural burial is the interment of the deceased in the soil in a manner that doesn’t inhibit decomposition but instead allows the body to recycle naturally. The body can be placed in a willow casket or simply wrapped in a shroud, and no heavy equipment is used to dig the grave. It’s all done by hand. If there’s a grave marker at all, it’s something natural like a bush or indigenous rock.

Finding a cemetery certified to handle this type of simple ending used to involve some sleuthing, but eco-conscious baby boomers are now influencing a surge in their development. Southern California’s first certified green cemetery is in the high desert at Joshua Tree Memorial Park. It’s what is known as a hybrid burial ground, according to the Green Burial Council, which also had its roots in Joshua Tree.

The Council certifies three categories of cemeteries for green burial grounds — hybrid, natural and conservation — and they reflect increasing requirements to meet the particular standard.

“We’re a hybrid,” says Maggie Matthews, manager at Joshua Tree Memorial Park. “We basically meet all of the standards of the most rigorous but we also have a traditional cemetery on our approximate 60 acres — although they’re very intentionally separated.”

The idea of starting a green cemetery at Joshua Tree Memorial Park first took hold in 2007. Working closely with the Mojave Desert Land Trust, the park was able to designate a section of the cemetery situated near critical wildlife habitat.

“We thought it would be a unique way to set aside the land that was already there and use it in that way,” Matthews adds.

There’s cost savings to be had, too. Today’s prices for pre-arranging a green burial at Joshua Tree Memorial Park are $3,367 for the land, $180 for the endowment and $1,200 for the opening and closing of the space. Your choice of a shroud, willow casket or similar biodegradable material won’t significantly increase the total amount.

Compare that to a traditional burial where you incur the same basic costs but also have to factor in a vault, which averages about $650, and a casket, with prices that typically begin at $1,300.

Initially it was Joyce Westmore’s husband, Marv, who began researching the concept of green burials. He knew he wanted something different. His fact-finding led the couple to reserve side by side space at Joshua Tree Memorial Park and to make additional arrangements such as pre-ordering the all-cotton, dye-free garments and silk shrouds they will be buried in.

“I just think it’s the right thing to do for myself and for the environment and to keep the world going as it should,” he says.

Interest in green burials will likely only increase in coming years as environment-minded baby boomers age up. It will probably never overtake what is considered the traditional burial method in North America, or even cremation for that matter, but it is a thought-provoking alternative.

For more information about green burials, visit greenburialcouncil.org. For details on how to arrange one locally: www.joshuatreememorialpark.com or (760) 366-9210.