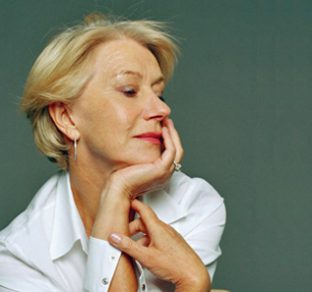 Helen Mirren is a shape-shifter, says director Julie Taymor, and the actress has extended her metamorphosing talents to changing the gender of not one, but two, well-known authority figures.

First, Mirren starred in Taymor’s film adaptation of The Tempest, released in December, playing sorceress Prospera rather than the traditionally male Prospero of Shakespeare’s play.

This month, Mirren steps into Sir John Gielgud’s shoes in a remake of Arthur, playing the tough old nanny and substitute parent to a rich, drunken, womanizing man-child.

At 65, most actresses are resigned to fringe roles as grandmas and spinster aunts. Mirren followed 2006’s The Queen, which earned her the best-actress Academy Award, with a stretch of work as busy and varied as any in her 45-year career.

Staying in the action

Her upcoming Holocaust-vengeance tale The Debt, set to be released in August, features what Mirren calls her “geriatric fight,” a close-quarters death match with an old man in a nursing home, defying Hollywood convention that action roles are for the young.

“The perception of being older is changing,” Mirren said in an interview at the Toronto International Film Festival last fall, where The Debt premiered. “It’s a lot to do with the fact that the so-called baby boomers are coming into that age, and they’re refusing to let go of life, or you know, they’re refusing to let go of being in the center of life…

“They will not step aside. We’ll have to eventually, because we’ll be too old not to,” Mirren said. “But people used to consign themselves to old age quite early, and I think people don’t do that anymore.”

Certainly not Mirren. She had a second film at the Toronto festival, the crime story Brighton Rock (opening in the U.S. this summer), and last year also starred as a brothel owner in husband Taylor Hackford’s Love Ranch and did a voice role for the animated Legend of the Guardians: The Owls of Ga’Hoole.

That all followed another best-actress Oscar nomination for 2009’s The Last Station, in which she played Leo Tolstoy’s imperious wife.

“I keep saying to my husband, ‘It’s all going to stop very soon, you know, Taylor,’” Mirren said. “It will inevitably. But you know, while it’s not stopping, I’m happy to go along with the flow.”

The Tempest proved a star-crossed meeting of minds. Mirren had been watching a stage version when it occurred to her that Prospero — a single parent raising a daughter on a remote island while orchestrating revenge and redemption for old enemies — could be played as a woman without changing a thing.

She mentioned the idea when she met Taymor, creator of the Broadway adaptation of The Lion King. Taymor, who had directed stage productions of The Tempest, already had been thinking about a film version with a woman in the lead.

“It was hers as soon as it came out of her mouth,” Taymor said. “There’s a vulnerability she brings to the maternal part of this in a way you’ve never seen with Prospero. And you believe in her intelligence, as well. What’s behind those incredible eyes.

“She can do anything. Looking at the range of her work — she’s played persons of power, persons of magic….She’s played a couple of queens, so she’s definitely a formidable presence.”

It was not Mirren’s first gender-bending Tempest role. As a child at her all-girls school, Mirren played wild man Caliban, a role done by Djimon Hounsou in Taymor’s Tempest.

Mirren began her career with Shakespeare, playing Cleopatra in a 1965 production of Antony and Cleopatra for Britain’s National Youth Theatre.

She later joined the Royal Shakespeare Company and made her film debut in a 1968 adaptation of the playwright’s A Midsummer Night’s Dream.

She worked steadily in British film and TV through the 1970s before breaking out internationally in the 1980s in such films as Excalibur, 2010, The Mosquito Coast and White Nights, directed by future husband Hackford.

The first of her four Oscar nominations came for supporting actress in 1994’s The Madness of King George, with a second supporting-actress nod coming for 2001’s Gosford Park.

The Tempest gave Mirren the opportunity to play a truly meaty Shakespeare role for an older actor, a rarity for women. “As you get older, as an actress specifically, the roles in Shakespeare as everywhere else tend to sort of die away,” Mirren said.

“It actually takes you a long time to learn how to do Shakespeare. You’re not good at it when you’re young. You get much better at it when you get older, but the annoying thing as an actress, as you’re suddenly getting into your powers with your Shakespearean abilities, the roles disappear.

Since Mirren is breaking gender boundaries, how about a Queen Lear?

“That’s very different. You’d have to change so much. King Lear is such a male character, getting drunk with his all his followers. Women don’t do that,” Mirren said.

“Lear is such a paternalist sort of male, and that’s his downfall, his feeling the need for domination, control. When he foolishly gives that away and is powerless and then is mistreated, that’s when he goes mad.