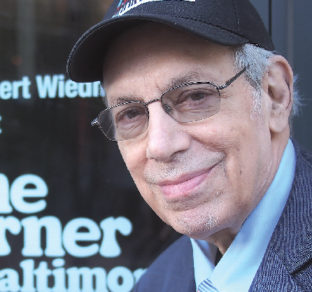 Jazz impresario Todd Barkan, 73, opened Keystone Korner, Baltimore’s new jazz lounge and restaurant, in April. Barkan worked in the music industry for decades in New York and San Francisco, but he said, “I’m in Baltimore now, and it feels like home.” Photo by Michael Wilderman
PRINT

Baltimore’s new jazz club, tucked between Fell’s Point and Harborplace, has been hopping since it opened last April.

In its first week, Keystone Korner Baltimore featured legendary bassist Ron Carter. During the summer, lines snaked around the block as people waited to hear smooth-jazz-neosoul Godfather and vibraphonist Roy Ayers. The iconic Blood, Sweat and Tears keyboardist Larry Willis, who died in September, made his last public performance at the club in August.

“Baltimore has a rich jazz legacy, with the likes of Eubie Blake, Cab Calloway and Billie Holiday,” said Keystone Korner’s owner, Todd Barkan, 73, whose San Francisco club of the same name hosted countless musical icons in the 1970s. “I’m in Baltimore now, and it feels like home.”

Aficionado since a teenager

Barkan’s love for jazz began in his early years in Columbus, Ohio. He took piano lessons as a child and became interested in jazz as a teenager. That’s also when he met his mentor, jazz saxophone legend Rahsaan Roland Kirk, known for his ability to play multiple instruments simultaneously.

While attending Oberlin College in the early 1960s, Barkan first began producing jazz shows. By 1968, he relocated to San Francisco and was working nights as the pianist for a Latin jazz band called Kwane & The Kwan Ditos. He eventually performed at the Keystone Korner in San Francisco.

In 1972, Barkan purchased that legendary club. Under his direction it became known as the “Birdland of the 1970s,” according to Pittsburgh pianist and bandleader Mary Lou Williams.

It was during the 70s that the nightclub earned its acclaim, largely due to Barkan’s ability to produce dozens of highly-regarded live recordings at the club.

“People ask me how I know all these legendary jazz musicians personally,” Barkan said. “It’s because this has been my life since I was in my 20s. I’ve gotten to know many of these people on a personal basis, and now they are my friends.”

He says he’s proud of the fact that during his ownership, Keystone Korner booked the likes of Art Blakey & The Jazz Messengers, Miles Davis, Phil Woods, McCoy Tyner and other all-star American-born jazz notables.

Keystone Korner Baltimore, a restaurant and lounge, is located in an upscale, well-lighted section of downtown, alongside new condominiums and other high-rises.

With a first-rate sound system, the venue holds close to 300 patrons who can watch the performers from the many video monitors placed strategically throughout the space. Valet parking and other public parking spots are available.

It took a chance meeting for the club to open. In April 2018, Barkan was lauded at the Kennedy Center in Washington, D.C. by the National Endowment for the Arts (NEA) as a “Jazz Master” for his lifelong contributions as a producer, club owner and jazz advocate.

At the NEA awards dinner at the restaurant Marcel’s in D.C., Barkan met and became friends with chef and owner Robert Wiedmaier.

After Mussel Bar’s Baltimore location shut down, Wiedmaier and Barkan collaborated to open a jazz club in the empty space.

Since it opened on April 30 (International Jazz Day), Keystone Korner Baltimore has welcomed hundreds of jazz sophisticates longing for the good old days, along with younger jazz enthusiasts.

But when asked whether the supper club would cater to a clientele strictly focused on traditional, straight-ahead jazz music, Barkan didn’t miss a beat.

“There’s no way I can exclusively rely on presenting only mainstream jazz,” Barkan said. “To survive in Baltimore is to provide a healthy variety of musical styles.”

That means an eclectic lineup that has included soul music, such as a “ladies’ night” tribute to Marvin Gaye and Luther Vandross, as well as a classical brunch with accompaniments by a Baltimore Symphony Orchestra quintet.

“It’s all about variety,” said Lucas Novaes, assistant manager. “There are so many different types of jazz fans, you have to be prepared to book a welcome mixture.”

Before coming to Baltimore, Barkan worked 11 years as programming director of the jazz club at Jazz at Lincoln Center, named Dizzy’s Club in honor of the late great John Birks “Dizzy” Gillespie.

During his 30 years in the Big Apple, Barkan produced more than 800 albums with labels such as Columbia, Fantasy, Milestone, Concord, Sunnyside and HighNote.

Downtown Baltimore hasn’t had an upscale jazz club for more than 25 years, Barkan said, so it has been rewarding to be part of the city’s music scene.

“What excites me most about this project is that it’s a revival of the Keystone Korner, but this time on the East Coast,” Barkan said.

“As was our mission at Keystone Korner in California, our mission now is to provide the best music in the world for the most affordable prices in the most loving environment.”

Keystone Korner Baltimore is located at 1350 Lancaster St., Baltimore, (410) 946-6726, keystonekornerbaltimore.com. Ticket prices range from $10 to $45, depending on the performer. Open for dinner daily and for brunch on Sundays. Reservations are accepted.