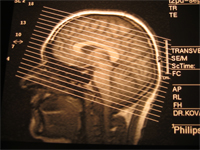 Sticky plaque gets the most attention, but now healthy seniors at risk of Alzheimer’s are letting scientists peek into their brains to see if another culprit is lurking.

No one knows what actually causes Alzheimer’s, but the suspects are its two hallmarks — the gunky amyloid in those brain plaques, or tangles of a protein named tau that clog dying brain cells. New imaging can spot those tangles in living brains, providing a chance to finally better understand what triggers dementia.

Now researchers are adding tau brain scans to an ambitious study that’s testing if an experimental drug might help healthy but at-risk people stave off Alzheimer’s. Whether that medication works or not, it’s the first drug study where scientists can track how both of Alzheimer’s signature markers begin building up in older adults before memory ever slips.

“We are thrilled and excited to be participating in this crucial trial for preventing Alzheimer’s,” said Dr. Paul B. Rosenberg, associate professor of psychiatry and behavioral sciences at Johns Hopkins University and principal investigator at Johns Hopkins for the new Alzheimer’s trial, known as the A4 study.

“Amyloid imaging has made it possible to identify people who are functioning well but have amyloid in their brains, and we believe the amyloid is being deposited 10 to 20 years before the first symptom.

“This provides a window of opportunity for prevention of Alzheimer’s, and A4 is targeting just that window. I think this is the right treatment for the right people at the right time, and a very timely trial,” Rosenberg said.

In addition to Johns Hopkins University, the study is being conducted at two locations in Washington, D.C. (Georgetown and Howard Universities) and more than 60 sites altogether across the country.

Stopping disease before it starts

The A4 study — it stands for Anti-Amyloid Treatment in Asymptomatic Alzheimer’s — aims to enroll 1,000 healthy seniors like Judith Chase Gilbert, 77, of Arlington, Va. The recently retired government worker is mentally sharp but learned through the study that her brain harbors amyloid buildup that might increase her risk. In May, researchers slid Gilbert into a doughnut-shaped PET scanner as she became one of the first study participants to also have their brains scanned for tau.

“We know that tau starts entering the picture at some point, and we do not know when. We do not know how that interaction happens. We should know,’’ said chief science officer Maria Carrillo of the Alzheimer’s Association, which is pushing to add tau scans to other dementia research, too.

More than 35 million people worldwide have Alzheimer’s or similar dementias, including about 5 million in the U.S. Those numbers are expected to rise rapidly as the baby boomers get older.

There is no good treatment. Today’s medications only temporarily ease symptoms, and attempts at new drugs, mostly targeted at sticky amyloid, have failed in recent years.

Yet more recent research, including a large autopsy study from the Mayo Clinic, suggests that Alzheimer’s other bad actor — that tangle-forming tau protein — also plays a big role. The newest theory: Amyloid sparks a smoldering risk, but later spread of toxic tau speeds the brain destruction.

Normal tau acts sort of like railroad tracks to help nerve cells transport food and other molecules. But in Alzheimer’s, the protein’s strands collapse into tangles, and eventually the cell dies. Most healthy people have a small amount of dysfunctional tau in one part of the brain by their 70s, Sperling said. But amyloid plaques somehow encourage this bad tau to spread toward the brain’s memory center, she explained.

The A4 study, which is enrolling participants in the U.S., Australia and Canada, may give some clues. The $140 million study is funded by the National Institutes of Health, Lilly and others. The Alzheimer’s Association helped fund the addition of the tau scans.

Taking part in the study

To qualify for the study, participants must be ages 65 to 85 and have normal thinking and memory abilities. Those who enroll will be given a PET scan to check for amyloid. People who do not show evidence of elevated amyloid in their brains will not be able to participate in the main study, but may be able to participate in a separate study where they will complete memory tests every six months to compare changes in cognition over time.

Those in the primary study will be checked for tau three times over the three-year study, as researchers tease out when and how it forms in those who are still healthy. They won’t be told the results — scientists don’t know enough yet about what the scans portend.

At the same time, study participants will be chosen randomly to receive either an experimental anti-amyloid drug — Eli Lilly & Co.’s solanezumab — or a placebo (an inactive substance) as researchers track their memory. The drug or placebo is administered through an IV infusion that takes up to one hour. Those in the study will receive the infusion once a month for three years.

If the drug proves to be helpful, it might be tamping down amyloid formation, which in turn reins in toxic tau. In previous studies, solanezumab failed to help full-blown Alzheimer’s but appeared to slow mental decline in patients with mild disease, raising interest in testing the still healthy.

Seeing how amyloid and tau interact in living brains “is opening a whole new chapter into possible therapies,’’ Turner added.

For Gilbert, learning she had amyloid buildup “was distressing,’’ but it has prompted her to take extra steps, in addition to the study, to protect her brain. On her doctor’s advice, she’s exercising more, and exercising her brain in a new way by buying a keyboard to start piano lessons.

“It’s exciting to be part of something that’s cutting edge,’’ said Gilbert, who had never heard of tau before.

And she has a spot-on question: “So what’s the medication for the tau?’’

Stay tuned: A handful of drugs to target tau also are in development, but testing will take several years.

To learn more about the study, go to www.a4study.org.

Johns Hopkins University is seeking individuals for the A4 study and other trials in Alzheimer’s Disease and other dementias. The studies take place mainly at the Memory and Alzheimer’s Treatment Center at the Bayview Campus.

Compensation may be offered to study participants for time and travel. For more information, email Sarah Woody Lawrence at swoody1@jhmi.edu or call her at (410) 550-9020.

For information about the study at Georgetown University, email ec912@georgetown.edu or call Erica Christian at (202) 687-8800. The Howard University site contact is Saba Wolday at swolday@howard.edu or (202) 865-7895.