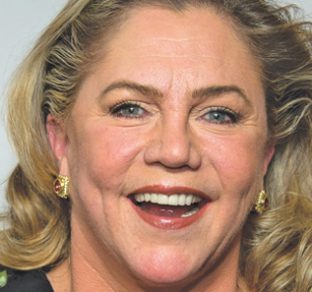 Kathleen Turner is as confused as anyone about the heavenly detour her roles have taken lately.

She’s making her first appearance as a Roman Catholic nun in the play High, which opened last month on Broadway. And, in a divine bit of coincidence, the actress best known for Body Heat and Romancing the Stone also stars as a suburban mom striving to be named Catholic Woman of the Year in a new film that opened at the same time at the Tribeca Film Festival.

“For some reason, this year it’s my year of Catholicism. Who knew?” said the 56-year-old actress in her rose-filled dressing room at the Booth Theater, where she’s putting the finishing touches on Matthew Lombardo’s play.

“I must confess that I don’t believe in any organized religion,” she said. “I happen to think that they’re all men putting words in God’s mouth. That doesn’t work for me, but I certainly believe in belief and faith.”

The first of back-to-back devout Catholic roles has Turner playing Sister Jamison Connelly, a foul-mouthed recovering alcoholic who is asked to treat a 19-year-old crystal meth addict and prostitute.

The three-character play explores the battle between addiction and faith as the nun tries to help a young man perhaps beyond forgiveness or redemption. It requires her to be devoid of glamour in shapeless clothing and a ponytail.

Lombardo, the playwright, had someone in mind. “When I was starting to get the idea of this play going — before I even put it on paper — I wanted a Kathleen Turner-type,” said Lombardo. “I needed a broad to play this role.”

He got the perfect one — a Broadway veteran with a distinctive, husky voice who has earned Academy Award and Golden Globe nominations. Lombardo also got an actress not scared of dropping F-bombs or showing a savage side.

“I am very drawn to women who simply just don’t accept how things are,” said Turner. “Don’t ask me to play a victim. It’s not going to work. I would stink at that. Give me a woman with a fight on her hands.”

Turner also brought something else to the feisty role that Lombardo only gradually learned: a sad familiarity with substance abuse. About a decade ago, Turner admits she was abusing alcohol to calm the grinding pain of rheumatoid arthritis.

“I didn’t realize the extent I was self-medicating. You know, I was in that strange place where I wouldn’t take pills because I was afraid they’d screw up my mind, but I’d take another drink,” she said.

“And alcohol kills pain. It really does. When I realized how insane this thinking was, I checked myself into a clinic to figure out what was going on. And I learned a lot.”

Turner took High on a pre-Broadway tour — there were workshops in Hartford, Conn., Cincinnati and St. Louis — and learned she wasn’t alone. From hundreds of audience members who stayed to chat after performances came tales of families torn apart by addiction.

“I’m starting to think we have a huge national dirty little secret here,” she said.

Her own addiction may have helped her get in touch with the emotions associated with substance abuse, but Turner dismisses the suggestion that being an addict is a requirement for the part.

“I’ve played hookers but I’ve never been out on Hollywood Boulevard, OK?” she said, laughing.

The play marks Turner’s first return to Broadway since her 2005 Tony Award-nominated spin in Who’s Afraid of Virginia Woolf? Her other notable Broadway roles include Mrs. Robinson in The Graduate in 2002 and Maggie in Cat on a Hot Tin Roof in 1990.

When she was playing Mrs. Robinson on stage, Turner famously appeared nude. This time the clothes stay on, even if playing Sister Jamison Connelly has often meant a different kind of stripping.

“It’s so intensely personal that it feels very, very, very vulnerable. I don’t know how to shield myself from some of that material, which is good and is essential for the material to work, but it’s hard,” she said. “If you’ve ever had a phobia about like standing up naked in front of everybody, that’s what it feels like.”

A focus on theater

Turner has also been focusing on one-woman shows, including Sandra Ryan Heyward’s Tallulah, and playing newspaper columnist Molly Ivins in Red Hot Patriot, which she debuted in Philadelphia last year and hopes to tour with next year.

She also found time to play a Catholic mom with a secret in the new independent film The Perfect Family, co-starring Emily Deschanel and Jason Ritter.

Turner has found more roles in the theater as big film projects dry up. She has been nurturing High for almost two years as it made its way to Broadway.

Lombardo said she turned down any special treatment along the way, declining to stay at five-star hotels if it meant breaking up the team.

“She just wanted to be with the company. It’s rare that you find an actress who’s willing to do that kind of work,” he said. “What makes her different from the rest is that she understands the creative process. How many actresses of her caliber would schlep through three cities?”

Turner said she did it because she’s growing sick of revivals and is happy to champion good new works. “I thrilled at the thought that I’m helping to place a new piece in the library,” she said.

And after years of safe choices on Broadway, Turner thinks better, riskier times are ahead. Along withHigh, she loved David Lindsay-Abaire’s darkly comic new play Good People and laughed out loud with her daughter at The Book of Mormon.

“I think people are getting their guts back,” she said.

For more on High, see www.highonbroadway.com.