King and I at Toby’s is like an old friend 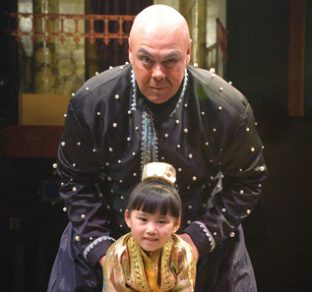 When attending the production of an old-time classic — especially an enduring show such as The King and I, which has long-since blossomed beyond Broadway into popular culture — a reviewer can be forgiven for hoping to see the director tweak familiar material to bring out some new facet or to make the show speak with a new voice.

But what director Shawn Kettering and his fully engaged cast at Toby’s Dinner Theatre of Columbia have done instead is to demonstrate that there’s still plenty of life in Rodgers & Hammerstein’s material in its standard form. There’s good reason The King and I is one of the most frequently performed and best-loved musicals ever.

It’s a swirl of lilting melody, colorful costumes and soaring voices. There are laughs, crackling drama and moments of suspense, all held together by uncomplicated, old-time emotion. And a clutch of cute kids, too.

The King and I first roared onto Broadway in 1951, and won the Tony for Best Musical. The story is as well-known as anything that has ever played on Broadway.

The material comes from Margaret Langdon’s 1944 novel, Anna and the King of Siam, which she loosely based on the experience of a somewhat mysterious figure named Anna Leonowens, who served as governess to the children of King Mongkut of Siam (Thailand) in the 1860s.

The king is credited with modernizing his kingdom and adapting enough Western ways to successfully fend off European colonial powers as they pushed their way through Asia. Langdon gives Anna much of the credit for that, overstating her actual contribution.

The musical was put on film in a landmark vehicle for Yul Brynner and non-singing Deborah Kerr (who lip-synced the songs) in 1956. There have been several non-musical films under the novel’s title Anna and the King of Siam.

Since then, The King and I has had numerous revivals on Broadway, spawned countless international tours, and, of course, thousands of local productions such as this one.

The score is even more famous, with at least five major hits that have become standards across the entertainment spectrum: the Disney-like “I Whistle a Happy Tune,” the jaunty “Hello Young Lovers,” the archetypical show tune “Getting to Know You,” the anthem “I Have Dreamed,” and the energizing “Shall We Dance.”

One thing these songs have in common is that they could have been written for any musical, and seem to have just been dropped into place. There are no specific Asian themes or lyrics organic to the story line.

Rodgers colored in a few exotic, but not strongly Asian, tones, but mostly in the secondary songs such as “A Puzzlement,” sung by the King. There is a haunting flute in the love ballad “We Kiss in a Shadow,” and some unusual chords in “My Lord and Master.”

Also unusual is that the story line precludes any kind of overt love story between the prim Christian widow and the polygamous king. Their relationship focuses on their disparate expectations of each other and a gradual acceptance of their differences.

This results in the odd placement of the very contemporary sounding ballad “Hello Young Lovers,” which Anna sings the first time around to a room of children and enslaved wives. The show’s sole love story is relegated to a secret, doomed affair between a new member of the king’s harem and a young man in the palace.

Rodgers and Hammerstein seemed to have run out of ideas after penning such memorable songs as mentioned above, as the second act is full of reprises. A lot of “etcetera, etcetera, etcetera,” to quote the king.

Despite the various themes that might be explored more fully, the story doesn’t go much into depth, leaving time for an extended ballet sequence in Act Two that inexplicably focuses on the American book Uncle Tom’s Cabin.

There’s also enough breathing room left over to showcase the adorable children, especially in their delightful introduction to Anna in Act One.

Considering all this, The King and I is like a helicopter or a bumblebee: it shouldn’t fly, but fly…soar…it does. Director Kettering generally keeps the energy level high, slowing down occasionally to let us take our time with the children. He’s aided by a first-rate cast.

David Bosley-Reynolds is a magnificent bear of a king, able to menace and charm almost simultaneously. He rumbles through “A Puzzlement” with a powerful bass, if not much grace, fitting for this rough-hewn monarch.

Willowy understudy Elizabeth Rayca filled in as Anna the night the show was reviewed, and it’s hard to imagine anyone anywhere doing a better job. Her voice is crystalline, and she expertly fulfills our expectations of this original British Iron Lady.

Bosley-Reynolds and Rayca allowed us glimpses at gradual tenderness developing between this unlikely pairing, piquing our interest just enough to hold the unwieldy plot together.

As the young lovers who sing “We Kiss in the Shadow,” Julia Lancione and understudy Chris Rudy took the audience through layers of emotion — particularly Lancione, whose soprano soared to operatic highlights.

Crystal Freeman added a welcome dose of earthiness as top wife, Lady Thiang. Freeman, with a strong voice and a low-key but commanding presence, displays another facet of female power as she helps Anna understand how to deal with a headstrong king.

Tina DeSimone’s choreography is basic and occasionally clunky. The large ensemble doesn’t seem to have been rigorously drilled for precision, but their energy makes up for some of the clumsiness.

As usual, there is a small orchestra augmented by terrible-sounding synthesized strings. Musical Director Ross Scott Rawlings might want to put a little swing, a bit of life, into a rather sluggish “Hello Young Lovers,” but the music overall is serviceable.

Florence Arnold’s colorful and intricately detailed costumes add a welcome dash of color to a production mostly played in a barren space with a few props, under a drab lighting design.

But production weaknesses will not diminish your enjoyment of this wonderful old show, expertly performed. Act Two, especially, allows emotion to inexorably build until the final scenes, and it’s a satisfying visit with an old friend.

By the way, Toby’s chefs have gotten into the Asian mood for this production, too. They’ve added some popularized Asian fare to the standard buffet menu, including sesame noodles, vegetable-fried rice, orange ginger carrots, broccoli in garlic sauce, and stir-fried vegetables.

Reservations are required. Ticket prices range from $32.50 to $53, depending on which performance is selected. Ticket prices include the all-you-can-eat buffet. There is ample free parking on the premises.