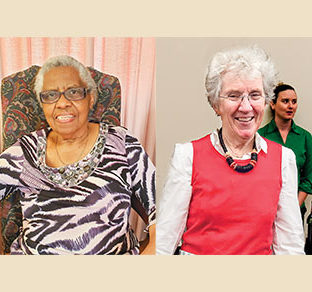 By Margaret Foster and Catherine Brown Posted on May 04, 2021

Delores Cole of Rockville, 84, has been helping others as a volunteer in her community since 1970, and she’s still going strong. Ann “Nancy” Aldous of Laytonsville, Maryland, 79, has been a volunteer for more than 50 years and doesn’t plan to slow down, either.

For their lifelong commitment to helping others, Cole and Aldous were each named a Neal Potter Path of Achievement Award winner. They will receive their awards at a virtual event this month.

Since 1998, Montgomery County, Maryland, has selected one or more residents 60 and older with the Path of Achievement Award. Later named in memory of former County Executive Neal Potter, the award honors those who serve as role models due to their lifelong commitment to volunteer work.

The awards are co-sponsored by the Montgomery County Commission on Aging and the Beacon Newspapers.

Wherever Delores Cole goes, she stands out: She spreads love and kindness with a smile that warms the room.

With a degree in social work from Morgan State University, she became a social worker and case manager at the Housing Opportunities Commission of Montgomery County. In that role, which she held for nearly 30 years, Cole helped low-income tenants of subsidized housing improve their career options through education and training.

“I’m from a family of individuals who are associated with social and religious human service activities,” Cole said. “We’ve always had jobs classified as helping others. My sisters, brothers, nieces and nephews are all in education and church systems.”

Cole has helped others through her work and beyond. For more than 25 years, Cole has brought food and other needed items to residents of local shelters.

For three decades plus, Cole has been an active member of Delta Sigma Theta Sorority, Inc. She works on the sorority’s voter registration drives and on fundraisers for local higher education scholarships.

In 1986, Cole founded a Saturday School tutoring program in Sandy Spring and Olney. After starting the program in the basement of her office at the Housing Opportunities Commission, she volunteered there until 1994, when Montgomery County Public Schools adopted the program.

Always dedicated to helping children succeed, Cole also tutored in MCPS elementary schools, where students fondly adopted her as their “grandma.” She reads with first-generation immigrants, special needs or disadvantaged students, helping each child make lists of their favorite things so that she can provide meaningful rewards and incentives.

Cole is an active member of Clinton AME Zion Church in the historic African American Neighborhood of Lincoln Park in Rockville, singing in the church choir and attending Bible study since her first days at the church.

For the past five years, she has visited sick or homebound parishioners, led senior ministry discussions, and supported the church’s fellowship with seniors.

This isn’t the first time Cole has received recognition from the county. Cole, who has served on the county’s Board of Elections, was one of 12 “Outstanding Women of Montgomery County” recognized by the Montgomery County Office of Minority and Multicultural Affairs.

Ann “Nancy” Aldous grew up in Montclair, New Jersey — a New York City suburb known for its diversity. She developed an admiration for other cultures there, which has been a strength during her decades as a volunteer.

“A lot of people came there from all over the world,” she recalled. “The ‘other’ was not frightening.”

Aldous attended George Washington University in Washington, D.C., where she met her husband, Gene. There, she also “had a teacher who was pretty incredible,” she remembered. The wife of a New Hampshire congressman, the professor encouraged her students to get involved, to help out.

“She basically told us to get out there. Do something,” Aldous said. She took that advice to heart and has never stopped following it.

When she and her husband moved to Montgomery County in 1969 to raise two sons, Aldous started giving rides, furniture and food “to people who need it. I got to see a lot of things I wouldn’t have seen,” she said.

“It was a great thing for me to get involved in some local stuff because I knew very little about Maryland,” Aldous said. “You can learn an awful lot in your own back yard.”

Aldous has devoted herself to addressing many community needs over the past 50 years, from homelessness to poverty. In the 1970s, after a friend died in a car accident, Aldous fought to strengthen DUI laws and helped establish a Students Against Drunk Drivers group.

For years, Aldous worked as a county-appointed member of the Montgomery County Library Advisory Board. In the 1980s and 90s, Aldous volunteered with the League of Women Voters, Sandy Spring Monthly Meeting of Friends, the Master Planning Committee for Damascus, and the Keep Montgomery County Beautiful campaign.

In recent years, Aldous has been teaching English as a second language. While doing so, she has met some inspiring women, she said, including immigrants from Myanmar, El Salvador and Peru.

Aldous recalls three Peruvian women who handed her a card at their graduation. “When I opened it, it was the loveliest card of thank-you I’ve ever gotten in my life from anybody, including my family,” she said. “In my experience, you get more out of [volunteering] than you give.”

Although Aldous suffers from an autoimmune disease, she musters enough energy to continue helping others, even during the pandemic, when the English classes she teaches have moved online.

What advice does Aldous have for other people who want to volunteer but don’t know where to start?

“Talk to your friends and find out who’s done what and how rewarding they found it. There are all kinds of things that need to be done.”