Love music? Time to get jazzed 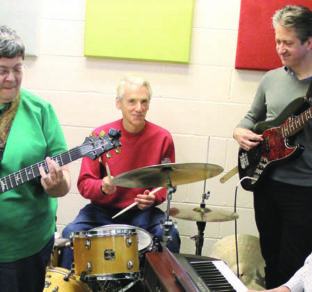 Jamming at a Wednesday afternoon session of the Jazz Workshop are (left to right) Judy Grass on guitar, Robert Jordan on drums and Paul Pieper on bass. Pieper started the popular workshops for amateur musicians, and leads about 18 sessions per week. Photo by Jim Quinn
PRINT

“You must join a jazz band!” shouted my sight-singing teacher after I played a few bars on the piano.

Well, the Jazz Workshop did. Paul Pieper, who runs the 18 two-hour classes and jam sessions every week in Tysons Corner, had me sit in on a session so we could size each other up.

Since I took jazz piano lessons in my 40s, I had always played alone, usually at home and occasionally at parties. I had a paid gig once, but I refused to play the host’s favorite song because I didn’t like it. I was not invited back.

After I retired as a journalist in 2009, I took up singing, and the grand piano sat quietly at home, used only to get the right pitch for practicing a song.

Yet at my first session, Pieper was positive. “You’ll fit right in nicely,” he said. “You know the chords, you can comp (accompany) and you can improvise.” My four band mates seemed pleasant and accomplished, and I quickly realized I was no longer a solo performer.

“You shouldn’t play the root note of the chord. That is for the bass player,” Pieper said gently. “And it’s best to keep in time with the bass player and drummer.”

One thing I learned is that jazz is a lot more structured than I thought. After the saxophonist or trumpet player lays out the melody, we take turns soloing, usually every 32 measures. Then we each play four bars and the drummer solos on four bars. It’s easy to get lost unless you listen for cues and keep up the 1-2-3-4 count.

Players are even told to look at the face of the soloist to see if he or she is finished before taking their turn. “And at the ending of the piece, don’t look at the notes so much. Just get a sense of what everyone is doing,” Pieper advised.

In 12 years as director of the Jazz Workshop, Pieper has found a rare combination for a jazz musician: Steady work, a full-time job and artistic enjoyment.

“It is nice to have a little more consistent job than relying on the gig economy, which jazz musicians have always done,” he said.

In the past, Pieper taught guitar lessons. “I found there were a lot of people good at that, but not many who could teach a small jazz group,” he said.

Pieper, who performs frequently in the Washington area, is so versatile that he fills in on piano, saxophone, bass, guitar or drums when there are gaps in the group.

“In the weekly instrumental jazz sessions, you gain an appreciation for other instruments,” said Mike Kuzmik, 66, a dental surgeon who plays saxophone. “Paul’s ability to hear what is being played — and what should be played — is amazing.”

Pieper’s classes, held every day of the week, are made up largely of professional and business people of all ages, “most of them with demanding career and family obligations,” he noted. Participants (who pay $65 per two-hour session) are placed in groups according to their ability, ranging from beginner to advanced.

A wide variety of experience

The sessions are held in a comfortable space within an office park at 8455-A Tyco Road in Vienna. Pieper likes to play recorded music between sessions, and there is a row of some of the greatest jazz albums posted along the wall.

There is also a separate program for jazz vocalists called the Vocal Workshop, run by pianist Chris Grasso. [See “A workshop for jazz singers”.]

Pieper’s sessions attract a few professional musicians who like to play straight-ahead jazz “with no compromise and no commercial constraints.” By straight-ahead, he means jazz that dates primarily from the 1945-65 era, before jazz branched out into many different directions.

One group spent several months practicing a repertoire consisting of “Stardust,” “Summertime,” “The Shadow of Your Smile,” “Like Someone in Love,” “Cottontail,” “Emily,” “Invitation,” and the Miles Davis tunes “So What” and “Nardis.”

Pieper says these kinds of songs are the basics “that almost everyone who loves jazz could agree on” before they branched out into more modern styles after the 60s.

One bonus from these sessions is being able to network with other like-minded musicians in what Pieper calls “a small and splintered jazz community in the D.C. area.” There aren’t many places anymore where you can talk about Miles Davis’ second quintet with Wayne Shorter, or Dizzy Gillespie’s distinctive upturned horn.

Another benefit: occasionally, a group of musicians gets together to take on a paid gig.

To gain stage experience, and to display their newly learned skills, Jazz Workshop musicians are given the chance to perform on the last Sunday of each month at the Epicure Café, located at 11104 Lee Highway, Fairfax, Va.

Two groups are selected from the Workshops to play for one hour each from 7 to 9 p.m., and then there is an open jam session from 9 to 11 p.m., where Workshop musicians sign up and are matched to play jazz standards with students from other groups.

Players find that there is more to jazz than just repeating the chords and notes on a sheet of paper. John Cox, a geophysicist who plays trumpet, had performed classical and band music most of his life.

Now 61, he joined the Jazz Workshop in 2015, “after many years of attempting to understand jazz on my own. I struggled for at least six months trying to be facile with the chord lingo and was very frustrated.

“Then one day, I realized that jazz has nothing to do with the taxonomy, but is about finding a path through a musical puzzle using your ears and your creativity. If you play something you do not like, move on to a note that carries through. So, that was my big revelation,” Cox said.

In the sessions, musicians not only learn from their instructor but from each other. “I feel like I am making progress as a player by working together,” says guitarist Judy Grass.

A retired computer scientist, she started with a trumpet in high school, and taught herself guitar before taking lessons when her son took up the instrument.

She discovered the Jazz Workshop on recommendations she got two summers ago at the Jamey Aebersold Summer Jazz Workshops in Louisville, Ky.

Of the jam sessions, Grass said, “The first time was very scary, but it has gotten better. A lot of times I am sight-reading pieces of music that are pretty familiar, but sometimes only one of three pieces I get to play is anything familiar.

“It is a good test of your skill set. Things that initially gave me a lot of problems are getting easier. It helps a lot that it is a friendly and forgiving group: both audience and players.”