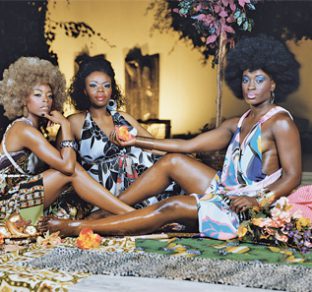 Picking up where it left off in its 2008 exhibition “Looking Through the Lens: Photography 1900-1960,” the Baltimore Museum of Art is bringing us up to date with its new exhibition, “Seeing Now: Photography Since 1960.”

The exhibition features individual photographs and photographic series by such renowned artists as Diane Arbus, William Eggleston, Lee Friedlander and Cindy Sherman, as well as works by artists whose names may be less familiar, such as Kota Ezawa and Joan Jonas.

Curated by Kristen Hileman, “Seeing Now” draws from the BMA’s more than 4,000 images. “We had a lot to choose from,” said BMA director Doreen Bolger.

Because the photos are so light-sensitive, many of them have never before been on display. “This is a once in a lifetime opportunity,” Bolger said.

For Hileman, choosing the works to be displayed was an “incredible opportunity” to learn about the BMA’s holdings in an in-depth way.

What is significant about photography since 1960, said Hileman, is that the medium began to concern itself less with photojournalism (with the heyday of magazines such as “Look” and “Life” beginning to fade) and more with critical views of contemporary life.

Going hand-in-hand was a greater use of color photography, and more experimental ways of producing images.

“Artists began to think conceptually during this time,” said Hileman, noting that BMA’s past curators had the “foresight” to collect the photographs that form the basis of this exhibition, a “celebration of our collection and its diversity.”

“Seeing Now” is divided into five sections: “Seeing Pictures,” images from history and popular culture; “Seeing People,” which provides an intimate look at people in their private world; “Seeing Places,” images of natural and man-made environments; “Seeing Performance,” which moves photography into newer forms such as video installations; and “Seeing Photography,” which shows how contemporary photographers use their medium as a subject in and of itself.

These are no “chocolate box” photos; instead, they veer between nostalgic and haunting, thought-provoking and even depressing, at times.

Robert Frank’s “Cape Cod”— at first glance, a family beach scene — shows, on closer inspection, a young girl at play, a woman lying on her stomach and a young boy gazing at a newspaper. Look closely and you can see the headline reporting the death of Marilyn Monroe.

Mary Ellen Mark’s black-and-white photo, “Amanda and Her Cousin Amy, Valdese, North Carolina (1990),” shows two young girls in a wading pool, the 9-year-old Amanda gazing defiantly at the camera with a cigarette in her hand. One can only wonder, what happened to such a tough little girl?

Even more “gritty,” as Hileman described them, are such photographic series as Larry Clark’s black-and-white “Tulsa,” shot between 1963-71, which tells the story of the drug-abusing friends he left behind, while Danny Lyon’s “Conversations with the Dead,” also in black and white, were shot in Texas prisons during the 1960s.

In an age where virtually everyone now has the tools to be a photographer, it’s no surprise that the BMA is itself taking advantage of technology to enhance the exhibition for viewers.

Nate Larson, Maryland Institute College of Art professor and artist, invited students enrolled in his course “Contemporary Directions in Photography” to respond in writing to seven of the exhibition’s images or series. The students considered the art works in relation to their understanding of the photographic medium, the history of photography and their own developing artistic practices.

In sum, what this exhibition is about, said Hileman, is the capture of a moment in time, to see in the future, to reflect upon the past.

Accompanying the exhibition are several special events. On Sunday, April 3, at 2 p.m., a panel discussion, “Watching You: Surveillance Exposed,” will explore the role of photography in surveillance. It will explore the local and global impact of this issue, and address individual responses, from artists’ subversions of street cameras to streaming constant video of oneself on the Internet. The event is free, but tickets are required and will be available at the BMA box office one hour prior to start time.

On Friday, May 6, from 6:30 to 10:30 p.m., Baltimore photographer Jim Lucio curates “Photography Late Night,” an evening of films, performances and interactive works inspired by the exhibition.