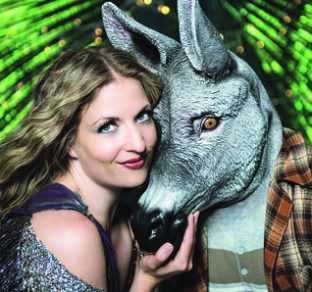 Chesapeake Shakespeare Company will begin its season with Shakespeare’s fantasy, A Midsummer Night’s Dream. Shown are Titania, the queen of the fairies, played by Kathryn Elizabeth Kelly, and Bottom, who has been turned into a donkey, played by Gregory Burgess. Photo by Teresa Castracane
PRINT

Howard County theatre aficionados have the luxury of having easy access to a number of top-flight theatre companies right in their backyards, meaning there no need to travel to New York or Washington, D.C. to indulge their passion.

Here are some of the highlights of the new theater season that starts in September.

In January, Rep Stage will host the Baltimore/Washington, D.C. premiere of Samuel D. Hunter’s The Whale — a play that tells the story of a morbidly obese man who is determined to eat his way to the grave. But before doing that, he seeks to restore a relationship with his estranged teenage daughter.

Annie Baker’s Circle Mirror Transformation is the story of those in a small town community who enroll in a drama class to investigate seemingly harmless theatrics. The result? Love triangles, family problems and personal successes abound in this critically acclaimed play.

Wrapping up its season is another area premier. Playwright Dominique Morriseau has been compared to Lorraine Hansberry, August Wilson and Tennessee Williams. Her play Sunset Baby is the story of a former black revolutionary who, seeking to reunite with his daughter, discovers the challenges of parenting, especially when the personal and the political lock horns.

The Chesapeake Shakespeare Company is kicking off its new season with a 250-seat theatre in the heart of downtown Baltimore. While The Comedy of Errors next summer will take place at Patapsco Female Institute Historic Park in Ellicott City, the theater’s traditional venue, the rest of the season will be performed in its new Baltimore home.

“On August 1, we began working in the former Mercantile Trust and Deposit building,” said Jean Thompson, the company’s communications manager. “Beginning in September, we will present the Bard’s A Midsummer Night’s Dream. That will be followed by Shakespeare’s historical drama Richard II.”

Right in time for the holiday season, the company will present A Christmas Carol by Charles Dickens. Ringing in the New Year is Anton Chekhov’s Russian classic Uncle Vanya, which is followed by the classic Victorian farce, The Importance of Being Earnest, by Oscar Wilde.

Chesapeake Shakespeare Company will wrap up its season with two of William Shakespeare’s most beloved works, Romeo and Juliet and The Comedy of Errors.

Toby’s Dinner Theatre is staging Memphis beginning in early September. This Tony Award winner tells the story of Memphis disc jockey, Dewey Phillips, who was known as one of the first white radio personalities to introduce black music in the 1950s.

Following that, Toby’s has up lined Mary Poppins, the nanny of every child’s dreams, beginning in November. Based on the books by P.L. Travers, the story, set in England in 1910, continues to enchant those who saw the movie in the 1960s. These days, many have the pleasure of sharing that love with their grandchildren.

On the other hand, there is also The Addams Family — every parent’s nightmare. Here we see Wednesday Addams, the princess of peculiar, finding herself a beau. She introduces dad, Gomez Addams, and mom, Morticia, to the sweet, “normal” with whom she has fallen in love.

In April, 1776 makes its debut at Toby’s. This musical shows the individual men behind the Declaration of Independence as uncertain, annoying, charming, brave, but ultimately determined to do the right thing for the new nation they are creating.

Laurel Mill Playhouse will present Agatha Christie’s perpetually popular The Mousetrap in September. In it, a peculiar group of people find themselves stranded in a boarding house.

The cast includes an unmarried woman with a past, a retired Army officer, a most unpleasant jurist and others. They are joined by a police officer who arrives on skis, and then the fun begins with the first murder. As the policeman begins his investigation, old, dark secrets about the visitors begin to emerge before the mystery is resolved.

In October, Laurel Mill presents Ntozake Shange’s For Colored Girls Who Have Considered Suicide When the Rainbow is Enuf. A series of poetic monologues interspersed with dance and music, the play introduces a form of theater Shange describes as a “choreopoem.” In For Colored Girls, seven unnamed women tell their stories — of confronting racism and sexism, rape, abortion and domestic violence.

For the holiday season, there is White Christmas. Based on the 1954 movie that starred Rosemary Clooney, Danny Kaye and Bing Crosby, the musical features the songs of Irving Berlin, including classics such as “White Christmas” and “Count Your Blessings.”

Finally, The Comedy of Errors, one of Shakespeare’s earliest plays, brings together hilarity, slapstick and cases of mistaken identity in a way that only a genius like William Shakespeare could manage to pull off.

Red Run Theatre Company opens its season in September with the Stephen Sondheim one-act revue, You’re Gonna Love Tomorrow. In this production, theatergoers will be treated to some of Sondheim’s lesser-known works throughout the course of his career.

Next up is Triumph of Love, a musical with a book by James Magruder, lyrics by Susan Birkenhead, and music by Jeffrey Stock.

Originally a 1732 commedia dell’arte (masked) play by Pierre de Marivaux, Triumph of Love revolves around the Spartan princess Leonide, whose love for Agis is thwarted as a result of her throne having been wrongly taken by her family from her beloved. Triumph of Love is a comedy that demonstrates — through gender confusion, deception and an absurd look at the world — the perils and pleasures of amour.

For young audiences, Red Branch is presenting A Year with Frog and Toad, a musical based on the children’s books of Arnold Lobel. The play, which follows the adventures of the cheerful Frog and his grouchy companion Toad as they make their way through the seasons — planting in the spring, swimming in the summer, raking leaves in the fall, and sledding in winter — is a wonderful celebration of two unique friends.