Sex, lies and humor in Husbands and Lovers 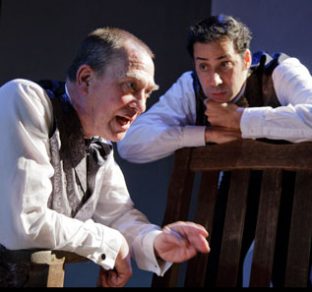 Conrad Feininger (left) and Peter J. Mendez play men who are toyed with the women in the Washington Stage Guild's production of Husbands and Lovers, a dozen vignettes about love and lies. Photo by: C. Stanley Photography
PRINT

Lies, deceit and duplicity — all those emotional contortions that create a faux fidelity between men and women in and out of love — get a wry and witty workout in a dozen vignettes by the Hungarian writer Ferenc Molnar. His Husbands & Lovers is being presented by the Washington Stage Guild through March 18.

Judging by the playwright’s perception, the Central European man in the first decades of the last century believed just about anything a woman told him — except the truth, especially about himself. Thankfully, things have changed for guys since then.

The 12 playlets touch on ways women woo and wound the most important men in their lives (as well as their husbands), how the key that locks a door is much more important than the key that opens it, and how telling nothing but the truth is often the best ploy to convince a lover you are fibbing.

At the Undercroft Theater in downtown D.C., where the production is being staged, the opening piece sets the pace for the wise, witty, perfidious things to come.

A wife offers her lover a faked photo of her supposed husband, looking like the Brad Pitt of his day. The lover, abashed and madly in love, goes all-out to shape up into an elegant and sophisticated looker of his own.

But the wife, who keeps her lover far from any view of her husband, soon tires of the guy. By “mistake” she drops a note in her lover’s apartment saying that she will be attending the opera that night with her husband. The lover takes off for the opera, only to find that the real hubby is “ugly, crooked, hairy.”

The woman confesses that she dropped the note on purpose because she wanted out of the affair and she knew her lover would be so miffed that the affair would slowly but surely end.

In fact, she has already found a new guy and given him another false husband photo. “Any man’s heart can be managed like that — with a photograph and a note,” says the wily woman.

In another dramatized snippet, the character known as Him says of Her: “She committed against me the greatest sin of which a woman is capable. . . She would tell me the truth, knowing full well I would never believe her. It was mean to take advantage of me like that.”

These epiphanies of the affairs of the heart — and the guys and gals who fall into, out of and take control of them — stir heady, if not full belly, laughs.

Director Bill Largess has done a fine job of adapting for the stage 12 of the 19 stories that originally appeared in a book by Molnar published in 1924.

Production props are minimal. There are a few changes of period costume, by Sigrid Johannesdottir. Just a single set of benches, chairs and trestles by Carl F. Gudenius and Jie Yu stand in for parks, drawing rooms, gardens and a bedroom.

So the play becomes the thing for the stellar cast of four: Lynn Steinmetz, Laura Giannarelli, Conrad Feininger and Peter J. Mendez.

All veterans of the local stage, the performers use their considerable acting skills to deliver the audience to time and place as they morph into teenagers, middle-aged lovers, and elders with world-wise and world-weary memories of affairs past.

There are no intermissions in the 90-minute production, which relies mostly on clever telling, rather than on any magical staging.

But there are two moments of choreographed enchantment. The play opens and closes with the four actors silhouetted by back lighting in a slow dance, changing partners as they gracefully move from one to another. So do their characters — He, She, Him and Her — waltz in and out of each other’s romantic lives.

This is the Washington Stage Guild’s 25 anniversary season. Husbands & Lovers continues its admirable tradition of presenting intelligent and witty plays with that Shavian touch, whether by Shaw himself (the master), or Wilde, Jonson, Pirandello, Schnitzler or Ferenc Molnar.

The current production runs through March 18. Thursday evening performances start at 7:30 p.m. Friday and Saturday evenings begin at 8 p.m., and Saturday and Sunday matinees are at 2:30 p.m.

The theater is located at the Mount Vernon Place United Methodist Church, 900 Massachusetts Ave. NW, Washington, D.C. There is limited street parking, but a surface parking lot is located a block and a half away at 9th and I Streets NW.

The theater is located within walking distance of the Metro Center, Mt. Vernon and Gallery Place Metro stops.