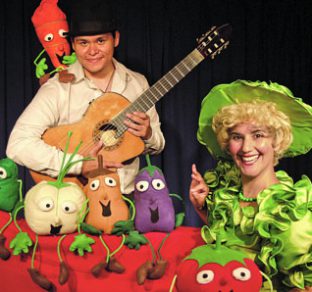 The children’s play Sanos y Contentos (“Happy and Healthy”) is part of the six-week Hispanic Theater Festival that begins on Oct. 17 at Gunston Arts Center’s Theater Two in Arlington. The festival includes plays for both adults and children from numerous countries, including Argentina, Uruguay, Ecuador and the United States. Photo courtesy of the Hispanic Theater Festival
PRINT

It has been flying under the radar of mainstream media for years, but a local Spanish-language theater company’s annual festival of plays from Spanish-speaking countries may be poised to break into general public consciousness.

Teatro de la Luna (Theater of the Moon) has been performing in Arlington since 1991. Since 1998, they have brought productions from Latin America, the Caribbean and Spain here each year for their International Festival of Hispanic Theater.

Theater companies from Spanish-speaking countries come here, actors in tow, usually performing plays which have never been seen in the U.S. Each show gets from three to 10 performance slots over a six-week period, which begins this year October 17 at Gunston Arts Center’s Theater Two in Arlington.

This year’s festival includes plays from Uruguay, Ecuador, Spain, Honduras, Argentina, the Dominican Republic, and children’s shows from the United States. Except for the children’s shows, which are bi-lingual, all performances will be performed in Spanish, with live English dubbing for those who do not speak the language.

Teatro de la Luna producer Nucky Walder says the festival is integral to the group’s mission of providing an authentic Latin American perspective to both the Spanish- and English-speaking communities here.

Learn about many cultures

People attend the festival “to enjoy something different,” Walder explained. “They can learn a lot because on Fridays we have a post-performance discussion, which is bi-lingual also.

“People can really learn about our culture and our different countries. You know, an Argentinean is so different from a Columbian or a Venezuelan. Or Spain, which is so different.”

The troupe, which has a regular schedule of workshops for children and adults, prepares study guides for parents and teachers. “The kids enjoy it more when they know what they’re seeing and watching,” Walder said.

Teatro de la Luna also stages poetry marathons, music and dance programs, and a regular season of its own plays. But the international festival is becoming their most high-profile product.

Embassies of the participating countries support the festival as an important part of their cultural outreach. For example, an invitation-only, opening-night reception will be held at the Embassy of Uruguay.

Marcelo Magnou, the embassy’s cultural attaché, said the festival is something in which they take pride. “For Uruguayans who are living and working here, it is a chance to see plays from home, in their language,” he said. “It is something they really appreciate. And we also like to reach the people of the United States, to let them know of our culture, how we are, how we live, and our traditions.

“And with all the countries in the festival, the American public can see that Latin America has a lot of diversity. So maybe, through theater, they can become more interested in us and visit Uruguay.”

Walder echoes Magnou’s thoughts on diversity, saying, “[Different nations] have the same words, language, but the way we say them or interpret them is different.

What kind of productions are on the schedule this year?

“The show from Uruguay [is] a comedy. From Honduras, the first time we have a play from that country, it’s more a drama. And we have some outstanding solo performances, where you can really see the quality of a good actor.”

For the actors and directors coming here, there is also a benefit, according to Walder. “They enrich their experience. They also get to see different things. They are curious.”

Magnou is amused by a question asking whether there is competition among the embassies regarding which country might have the best show, or attract the biggest audiences.

“We’re not thinking about competition, just cooperation,” he replied, ever the diplomat. “We hope our fellow Uruguayans will go to the whole festival and see all the other plays, because the other countries are also bringing nice plays.”

Comedy. U.S. premiere. Suitable for ages 13 and up.

A woman questions herself, and she questions, interrogates, entertains, thrills and surprises us. Alone with her secret, she moves in and out of her own life, which is somehow also ours. She reproaches, accepts, rejects, seeks and converses with her past. Guilty or innocent, from the psychoanalyst’s couch to the preacher of fashion, there is debate amidst a world where prejudices drown better dreams.

Comedy. U.S. premiere. Suitable for ages 15 and up.

It was always thought — and still is — that there is no greater madness than to talk to oneself. In theater, this madness is called a “monologue.” Today we have before us history’s three best-known and/or most famous Joans: Joan of Arc, Joanna the Mad of Castile and Pope Joan.

These three important historical figures will be portrayed in a serious and praiseworthy piece of work by our own present-day Joan — “Star Joan” (Juana Estrella) — who with her immense and wild sense of humor will demonstrate for us in true comedic fashion that she’s not Joanna the Mad, but “That Crazy Joan.”

Dramatic comedy. U.S. premiere. Suitable for ages 15 and up.

Alone on the Moors of Castille, three female comedians (popular actresses) discover that their director has died. Far from anywhere and with a sense that they are being threatened from all directions, they ask themselves: What do we do with the dead man?

Speaking in a made-up language, they describe with words of Golden-Age beauty everything about how it feels to exist in the present that surrounds and shows itself to us.

Drama. U.S. premiere. Suitable for ages 15 and up.

Telling the story of the lives of thousands of men and women who are struggling to get out of a well — one they never wanted to fall into — about people who laugh and cry at every step along the way; who love and hate with intensity, desperately seeking to attain a better life.

Dramatic comedy. U.S. premiere. Suitable for ages 15 and up.

Vegetal seeks to provide a humorous glimpse at human beings, their use of time, and the links between them. As Seneca said: “It’s not that we have too little time, it’s just that we waste so much of it.”

Vegetal speaks about the importance of the present, about what is wanted, what is feared, what is kept hidden, and what is disguised in life.

Satiric comedy. U.S. premiere. Suitable for ages 15 and up.

Signs are beginning to appear that the end is at hand… In this “terrible and naughty” production, fiction and reality are turned into an interesting allegory about the destiny of a Caribbean island.

With the use of elements of comedy, this play exposes students to the harsh realities of this ever-so present issue, schoolyard bullying. It highlights the “cons” of bullying and reinforces all the “pros” of being buddies.

Sweet Miss Lettuce and her uncle Mr. Cucumber teach us that we can fight the evil Mrs. Laziness, discovering a world of good nutrition that, along with exercise, allows us to live happily and healthfully. Suitable for all ages.

The Dominican Republic: Platero y Yo ( Platero & I)

The interpretation and stage direction of Claudio Rivera is based on the book by Juan Ramón Jiménez [winner of the Nobel Prize in Literature] and celebrates the 100th anniversary of its publication. Joy and innocence go hand-in-hand in this production, sowing seeds of friendship and tenderness.

All productions of the 17th International Festival of Hispanic Theater are staged at Gunston Arts Center’s Theater Two, located at 2700 S. Lang Street, Arlington. The theater is wheelchair accessible and there is ample free parking.