Sunday in the Park connects all the dots 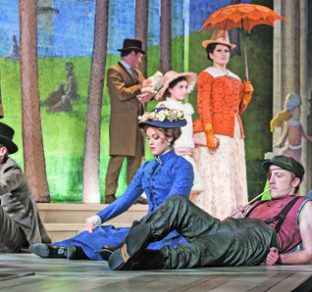 Stephen Sondheim’s musical Sunday in the Park with George tells the fictional story behind the characters painted by George Seurat in his famous painting “A Sunday Afternoon on the Island of La Grande Jatte.” The musical, featuring both local and Broadway talent, continues at Signature Theatre through Sept. 21. Photo by Christopher Mueller
PRINT

About 130 years ago, Parisian painter Georges Seurat had a talent and personal vision that led to the Neo-Impressionism movement. In recent years, American composer and lyricist Stephen Sondheim has used his vision and talents to refresh and stretch the boundaries of musical theater.

Those two premises come together in Sondheim’s musical Sunday in the Park with George, the glorious opener of the 25th season at Arlington’s Signature Theatre.

This show pays tribute to creation — seen here through the prism of an artist’s attempt to bring order to the emotional disarray of life. If our lives begin as a blank sheet or canvas, the challenge is to bring order to it, as we hear in the first moments of this fascinating and haunting musical.

Seurat used dots of color, meticulously put on canvas one at a time. When seen at a bit of remove (emotional distance?), the tiny marks melt into a new, blended color and shape. The staccato nature of the pointillist technique…dot…dot…dot…lends itself to a style of music and lyrics of which Sondheim is a primary force.

Art and music and life: step back and let it all sink in as a thing of beauty. And Sunday in the Park with George is truly a thing of beauty, never more so than in the capable hands of Signature Theatre, nationally known as one of the principal interpreters of Sondheim’s work. (This is the 23rd Sondheim show Signature has staged.)

Signature’s Associate Artistic Director Matthew Gardiner helms this one, bringing in a pair of Broadway veterans for the leads and backing them up with some of Signature’s current crop of regulars.

Gardiner seems unafraid of the significance of this show in musical theater history, and the fact that Sondheim says it is his most personal work. While remaining true to the show’s pedigree, he allows the cast to develop a bit more emotional depth than I have seen in other productions, especially with regard to James Lapine’s somewhat spare book.

While Claybourne Elder, as George, remains a bit aloof and emotionally isolated, the rest of the cast layers varying shades of the conflicting swirl of hope, melancholy, regret and joy that makes us human. This aids Sondheim’s music in evoking deeply powerful sentiment as the story unfolds.

That story is a fictionalized look at the artist and his two-year creation of his seminal work, “A Sunday Afternoon on the Island of La Grande Jatte,” which he started in 1884. Four dozen people and a few animals are sharing a leisurely afternoon in a park, and yet Seurat notices no one is looking at another person.

Writer James Lapine gives some of those figures a story, exploring their link to immortality in this now-famous painting. Lapine’s artist is so absorbed in his work that he becomes rather detached from the real world, causing his personal relationships to wither.

The brilliance of the show and this production are evident in the very first song, the title tune “Sunday in the Park with George.” It is sung by Elder and the lusciously talented Brynn O’Malley as his lover, archly called Dot. (Just another point of his complicated life’s landscape?)

It is a bravura performance as they take on this challenging number, with its atonal bursts of song and rapid, lung-challenging patter. George is dotting his canvas in sync to the staccato score, with Dot as his model.

Elder’s voice seemed a bit weak opening night, but O’Malley’s voice is a radiant, shimmering vehicle of expression. She is able to blend comedy and yearning seamlessly, managing to cross her eyes to high comic effect at a particularly grueling musical passage.

She all but steals the show with this opening song, and never really lets it out of her grasp for the next two and a half hours. O’Malley has a luminous stage presence combining emotional vulnerability with intellectual strength and courage. Her voice rings out in radiant colors of tone.

In the second song, titled “No Life,” Mitchell Hébert and Valerie Leonard, as ensemble members Jules and Yvonne, allow us to fully experience an example of Sondheim’s genius. The song is about life and color in art. The music itself seems to be presented in dots, accompanied by sharp vocal jabs with lyrics.

Magically, it wafts out over the audience and holds us in a warm embrace. It is almost as if Sondheim is answering his critics here — those who have not developed an ear for his scores because they think they can be cold and “not hummable.”

Writer Lapine understands his friend Sondheim. If you have any doubt about that, look for the artistically penetrating documentary he produced, a flattering portrait of the artist called Six by Sondheim, currently playing on cable TV.

Lapine gives us a Georges Seurat very much like Stephen Sondheim — a man who may have been isolated emotionally, but who expressed himself through work that stretched boundaries and reformed the milieu in which he worked.

But this is not merely an intellectual experience. It is deeply satisfying to just sit back and let the beauty of the music and the richly visual staging wash over you.

The effect is truly spellbinding. The singing is entrancing, backed by 11 musicians and lush arrangements conducted by Signature’s John Kalbfleisch.

At the end of the Act One, and the singing of the poignant “Sunday,” the painting comes to life before our eyes in one of musical theater’s most richly emotional moments.

Now, the play could really end there. But there is an Act Two, which takes us a century forward in time to the 1980s, and a view of the modern art “scene.”

Despite some innovative use of electronic media, it is pretty rote stuff, even if it does contain one of the show’s best songs, “Putting it Together,” sung by the company.

A reprise of “Sunday” closes the show, re-creating the emotional tapestry from Act One, so we leave the theater fully satisfied.

Sunday in the Park with George continues through Sept. 21 at Signature Theatre’s MAX Theatre, 4200 Campbell Ave., in Arlington.

The theater is accessible for people with disabilities, though it is recommended that special seating needs be mentioned when tickets are purchased. Free listening devices are available. Free parking is available in nearby public garages.

For general information, contact the theater at (703) 820-9771 or visit www.signature-theatre.org.