Take a tip from this entrepreneur 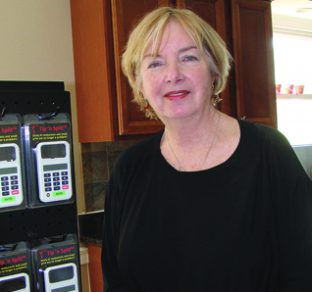 Since retiring from teaching after 30 years at the University of Maryland, Connie Inukai — like a growing number of retirees — has devoted her time and savings to entrepreneurial endeavors. Inukai is shown with her Tip ‘n Split device, which she invented to help restaurant patrons figure out tips and split the bill. The product, which also includes a menu light and magnifier, was named “best new product” at last year’s INPEX inventors expo and has been featured on QVC. Photo by Barbara Ruben
PRINT

If you asked Connie Inukai three years ago where she saw herself in a few years, about the last place the University of Maryland technical writing instructor would have envisioned was on the cable shopping network QVC.

But there she was on live TV at 7 a.m. one morning this August, demonstrating the new gadget she invented — the Tip ‘n Split, which calculates tips and evenly splits the check among diners at a restaurant. The small device also includes a magnifier and menu light to help patrons read small type at dim tables.

She sold more than 800 of the devices in just five minutes.

“I was so nervous. But at the same time, it was exciting to be on TV selling something I invented,” said Inukai, who is in her 60s and lives in N. Potomac, Md.

Now she’s set her sights on “Shark Tank.” In April, she had one minute to pitch the Tip ‘n Split in a Washington audition. She made the first cut, and was invited to send a video to producers.

Inukai is still waiting to hear if she will appear on the popular ABC network show, during which wealthy investors decide if they will give hundreds of thousands of dollars to contestants in exchange for a share in the profits from the products they are trying to get off the ground.

A similar show on CNBC, “West Texas Investor’s Club,” recently contacted her about possibly appearing on it as well.

Three months ago, Inukai retired after 30 years of teaching writing at the University of Maryland to pursue a new career as an entrepreneur. She had had enough of grading papers into the wee hours, and wanted more time to market the Tip ‘N Split, which she started developing two years ago.

“Now I have freedom,” Inukai said. “That’s why I decided to retire, so I could see my grandkids on the West Coast and work on my invention.

“I’m spending my retirement savings, but you know what, that’s what entrepreneurs do,” she said.

As the saying goes, necessity is the mother of invention, and Inukai took the aphorism to heart.

“I go out to dinner, and sometimes the menu print is too small and everyone has to pass around reading glasses. When we want to read the bill, the restaurant is so dark, we have to walk over to where there’s a light. I said, ‘That’s ridiculous.’”

While there are smartphone apps that can perform the same functions, Inukai said that older adults are less likely to want to constantly pull out their phones (or know how to use all the apps). Furthermore, the Tip ‘n Split weighs just 1.8 ounces, is a cinch to use, and runs no risk of getting viruses since it’s not online.

So Inukai worked with her ex-husband, who is an engineer, to design the algorithms for the Tip ‘n Split. Then she arranged for its manufacture in China.

Inukai also says she’s filling a vacuum in the market for gifts for older adults. “Another reason I’m so passionate is because every place you go, you can find gifts for babies, for children, for millennials, young mothers. But how come nobody takes care of older people? I thought this would be a really nice thing” to give friends, she said.

Then the hard part began: Getting the word out about the Tip ‘n Split and selling it. QVC discovered Inukai when it was scouting for new products at INPEX, an annual expo for inventors, where she won the gold award for best new product last year.

Inukai also found a group called Shark Tank DC, which is not directly related to the TV show, but helped recruit the show to hold auditions in Washington. Each month, the group’s members pitch their products in front of fellow members to help hone their skills and win a $50 prize. Inukai came in first in September.

“Connie will do well because her product is filling a need, and she’s putting it out there in front of the people most likely to buy it,” said Yvonne Rivers, who created Shark Tank DC. She is also principal and founder of Phoebe Marketing Group in Washington, D.C., which offers classes to entrepreneurs.

“Connie epitomizes what baby boomers can do after retiring from a career. She doesn’t just sit back and rest on her laurels. She’s moving onto something new and great,” Rivers said.

“I’m a creative person,” Inukai said. “Now that my kids are grown, I have time to come up with all these ideas.”

The ranks of older entrepreneurs like Inukai are growing quickly, said Lynne Strang, the author of Late-Blooming Entrepreneurs: Eight Principles for Starting a Business After Age 40. Strang lives in Northern Virginia and also writes a blog on the subject (https://latebloomingentrepreneurs.wordpress.com).

“Executive positions are difficult to find these days. So when a layoff occurs, people may start a business because they need income and/or funds for retirement,” Strang said.

She points to research from the Ewing Marion Kauffman Foundation that found those age 55 to 64 have started new businesses at a higher rate than people in their 20s and 30s every year from 1996 to 2013, the last year data is available. Those in the 55-to-64 age group represented nearly one-quarter of all new businesses started in 2013, rising from 14 percent in 1996.

“Late-blooming entrepreneurs have a lot going for them,” Strang added. “A later start may increase the odds for entrepreneurial success because it allows time to develop certain characteristics and assets, including a bigger and better network.”

She added that older entrepreneurs are often in a better financial position than younger ones, since they may have more savings and be seen as less risky for bank loans.

They may also be more resilient. “Older entrepreneurs have lived through peaks and valleys — an inevitable part of starting and operating a company,” Strang said.

“For younger business owners who haven’t endured as many life events, lean times and dips in business may cause more angst. When you’ve weathered a lot of storms, you know the sun will emerge again eventually.”

So far she has funded the Tip ‘n Split completely on her own, using profits from her successful dabbling in the stock market.

“Friends sometimes ask if I’m crazy; if I shouldn’t be spending the money on something else,” she said. “I have no investors. I wish I did, but no one believes in me like I believe in me. I believe I have good intuition.”

Right now, Inukai is working on a new version of Tip ‘n Split that also calculates currency conversions. She has a few new ideas for projects percolating in her imagination as well.

In addition, Inukai is looking forward to a month-long trip to California in January for the birth of her fourth grandchild — something she would have had to forego before retirement.

She’s also enjoying the success she’s had so far, and sharing tips with other budding entrepreneurs.

What’s the essence of her advice? “Believe in yourself and take risks, but risks you can handle. If you have something that you really feels solves a problem and you’re willing to take a risk, I say go for it.”

To learn more about the Tip ‘n Split or to buy the device ($22.92, including shipping and handling), visit www.tipandsplit.com.