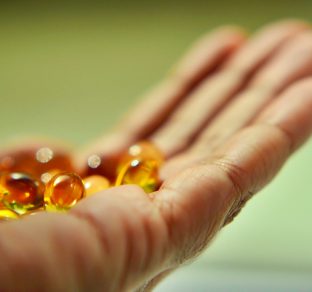 Researchers say vitamin E might slow the progression of mild-to-moderate Alzheimer’s disease — the first time any treatment has been shown to alter the course of dementia at that stage.

In a study of more than 600 older veterans, high doses of the vitamin delayed the decline in daily living skills — such as making meals, getting dressed and holding a conversation — by about six months over a two-year period.

The benefit was equivalent to keeping one major skill that otherwise would have been lost, such as being able to bathe without help. For some people, that could mean living independently rather than needing a nursing home.

Vitamin E did not preserve thinking abilities though, and oddly, it did no good for patients who took it together with another Alzheimer’s medication. But those taking vitamin E alone required less help from caregivers — about two fewer hours each day than others in the study.

“It’s not a miracle or, obviously, a cure,” said study leader Dr. Maurice Dysken of the Minneapolis VA Health Care System. “The best we can do at this point is slow down the rate of progression.”

The U.S. Department of Veterans Affairs sponsored the study, published in the Journal of the American Medical Association.

No one should rush out and buy vitamin E, several doctors warned. It failed to prevent healthy people from developing dementia, or to help those with mild impairment (“pre-Alzheimer’s”) in other studies. And one analysis suggested high doses might even increase the risk of premature death.

Still, many experts cheered the new results after so many recent flops of oncepromising drugs.

“This is truly a breakthrough paper, and constitutes what we have been working toward for nearly three decades: the first truly disease-modifying intervention for Alzheimer’s,” said Dr. Sam Gandy of Mount Sinai School of Medicine in New York. “I am very enthusiastic about the results.” The cost of Vitamin E is also much less than other treatments.

About 35 million people worldwide have dementia, and Alzheimer’s is the most common type. In the U.S., about 5 million have Alzheimer’s. There is no cure, and current medicines just temporarily ease symptoms.

Researchers don’t know how vitamin E might help, but it is an antioxidant, like those found in red wine, grapes and some teas. Antioxidants help protect cells from damage that can contribute to other diseases, says the federal Office on Dietary Supplements.

Many foods contain vitamin E, such as nuts, seeds, grains, leafy greens and vegetable oils. There are many forms, and the study tested a synthetic version of one — alpha-tocopherol — at a pharmaceutical grade and strength, 2,000 international units a day.

Years ago, another study found that the same form and dose helped people with more advanced Alzheimer’s, and many were prescribed it. But vitamin E fell out of favor after a 2005 analysis of many studies found that those taking more than 400 units a day were more likely to die of any cause.

Participants were placed in four groups and given either vitamin E, a dementia medicine called memantine (its brand name is Namenda), both Vitamin E and memantine, or dummy pills (placebo).

After a little more than two years of follow- up, those on vitamin E alone had a 19 percent lower annual rate of decline in daily living skills compared to the other three groups.

“It’s a subtle effect, but it’s probably real,” Dr. Ron Petersen, the Mayo Clinic’s Alzheimer’s research chief, said of the benefit on daily living from vitamin E. “That has to be weighed against the potential risks” seen in earlier studies, he said.

Heather Snyder, director of medical and scientific operations for the Alzheimer’s Association, said the group’s position is that “no one should take vitamin E for Alzheimer’s disease or other memory issues except under the supervision of a physician,” because it can interfere with blood thinners, cholesterol drugs and other medicines.

The new results also need to be verified in a fresh study that includes more women and minorities, she said.