Women take to the air in races 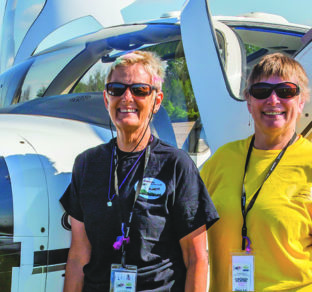 Carol Christian of Baltimore, left, and Jane Toskes of Bel Air smile after touching down in Canada at the conclusion of the 2019 Air Race Classic. The annual event sends women pilots, ranging in age from 21 to 90, zigzagging 2,500 miles from Tennessee to Ontario over four days. Photo by Air Race Classic
PRINT 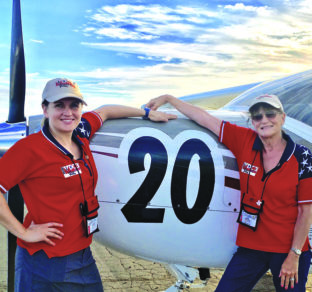 For a week in June, 109 women pilots grouped into 49 teams flew 2,538 miles across nine states and one Canadian province in a variety of planes.

The women, who range in age from 21 to 90 years old, are members of an exclusive club. Only 7% of airplane pilots are female.

And these women are not just experienced pilots who love to soar above Mother Earth. They race airplanes for fun.

The 43rd Air Race Classic was the ninth race for Debi Dreyfuss, a Potomac grandmother of six. With 30 years of flying experience, Dreyfuss is now a flight instructor, having retired from 20 years in advertising. She owns three airplanes and flies around 250 hours a year.

“It’s kind of addictive,” Dreyfuss said. “I enjoy being with women who like to compete, and it’s a way to get to know your airplane intimately.”

Dreyfuss recalled her naiveté in her first race. “We did not know what the heck we were doing,” she said. They placed 23rd that time, though they came in first in the last leg. But awards matter less than the thrill.

“We went 209 knots. Our normal speed is 140 knots. It encouraged me to do it again. It’s a rush — 200 feet off the ground, going full throttle at the flybys, zooming past the timing judge.”

Carol Christian of Baltimore and co-pilot Jane Toskes of Bel Air, Maryland, raced in a Cirrus SR22 and called themselves the Cirriusly Amazing team. In June, they clocked in at 29th place.

“We had a great time and learned a lot,” Toskes said after the race. “Weather, as always, is a major factor that affects all racers. Next time, we may wait for better winds.”

The Air Race Classic started in 1929 as the Women’s Air Derby, in which 20 women, including Amelia Earhart, raced from Santa Monica, California, to Cleveland, Ohio.

Racing continued through the 1930s, was interrupted by World War II, and then resumed in 1947 as the All Women’s Transcontinental Air Race, nicknamed “the Powder Puff Derby.” The last derby took place in 1977, and the Air Race Classic continued the tradition of women’s racing.

The race route changes every year. The one prescribed for the 2019 race stretched from the race’s start in Jackson, Tennessee, to its terminus in Welland, Ontario. It consisted of nine legs of 280 to 320 statute miles each, and racers were given four days to complete the trip.

Race organizers designate certain airports on the route for “flybys” where officials record the aircrafts’ times. At these checkpoints, pilots can either land or continue on. As Mitchell explained, “Pilots must hit every checkpoint. How you get there is up to you.”

Rules require racers to fly only in daylight with three miles of visibility and a 1,000-foot ceiling. Planes must be fixed wing and non-turbocharged, non-supercharged piston-powered airplanes with between 100 and 600 horsepower.

The trip requires meticulous strategic planning and analysis of factors like wind, rain, visibility, terrain and airplane performance. Pilots must decide, for example, how many legs to fly each day and at what elevation.

And yet, the racers aren’t truly competing against each other. Officials assign a handicap speed specific to each individual airplane so that planes can compete on an equal footing. This means that each team races against its own handicap. The winning team is the one that beats its handicap speed by the most.

There are cash prizes: first place wins $6,000; second, $4,000; third, $3,000; and a smaller prize goes to each leg’s winner. Other prizes included the fastest by aircraft brand, and the SOS Claude Glasson “Turtle” Award for the lowest-scoring team with no penalties.

Christian, who has been flying since 1985, is an astronomer for one of the contractors that helps operate the Hubble Space Telescope for the National Aeronautics and Space administration (NASA). In her free time, she’s a flight instructor.

“It is even less common to be a woman mechanic than pilot,” she said.

Growing up, Christian wanted to be astronaut. “It’s all about up, going into space, getting away from the nonsense in one’s regular job,” she said.

Christian realized in her college years that she wanted to fly planes. Once, when she was a passenger in an airplane doing reconnaissance over an erupting Hawaii volcano, the plane experienced partial engine failure during takeoff.

“I was frustrated. I knew if I could talk on the radio, I could help. Instead, I had to sit quietly,” she said. “That experience convinced me I should be a pilot.”

Christian’s teammate Toskes, a grandmother of two and great-grandmother of two, has 40 years of flying experience. “I grew up wanting to be an astronaut, but with poor eyesight, it was never going to happen,” she said.

Over the last 20 years, Toskes and her husband Joe have run a company that provides private jet services and manages other people’s jets. Her customers typically own airplanes but do not know how to fly or maintain them. So, for example, they flew an airplane owner to the NCAA Final Four basketball tournament.

For Toskes, flying is both a job and pure fun. “Every time you go up, there’s always something to learn, always challenges.”

For more information about the Air Race Classic, visit airraceclassic.org.