A homecoming for performer Tori Amos 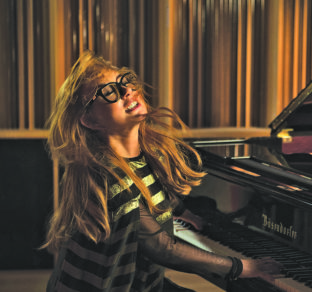 Singer Tori Amos, who was accepted to Peabody Institute at age five and expelled for “musical insubordination” at age 11, will return to give the commencement speech and receive an award. Photo Courtesy of Peabody Institute of The Johns Hopkins University
PRINT

When singer-songwriter Tori Amos addresses graduates at the Peabody Conservatory’s 2019 Commencement on Wednesday, May 22, it will be a homecoming of sorts for her.

Amos was the youngest student ever admitted to Peabody, receiving a full scholarship when she was just five years old. She lived in Baltimore from 1965 to 1972, at which time her family moved to the suburbs of Washington, D.C.

Now 55, Amos was a musical prodigy who taught herself to play piano and began composing her own music at the age of three. She could play by ear songs she had heard only once before.

As a child, she also experienced chromesthesia, a phenomenon in which an individual can “see” music as structures of light. Amos has described the sensation as “euphoric.”

When Amos was 11 years old, her Peabody scholarship was rescinded and she was asked to leave. Amos has said that was because she was interested in rock music and didn’t like to read sheet music.

In the 1980s, Amos was the lead singer of a pop group called Y Kant Tori Read. Her solo career took off in the early 1990s with the album Little Earthquakes. Since then she has released 15 commercial albums, seven of which debuted in the top 10 of the Billboard 200. She performed her first world tour in 1992, and since then has performed in more than 1,000 shows.

Amos has applied her talents to a variety of musical genres. From 2011 to 2013, she worked with German musicologist Alexander Buhr on her 2011 album, Night of the Hunters, which pays tribute to composers such as Bach, Chopin and Debussy. In 2013, her stage musical, The Light Princess, premiered at London’s Royal National Theatre.

Amos’s music addresses themes such as sexuality, feminism, politics and religion. She was the first spokesperson for the Rape, Abuse and Incest National Network (RAINN), a crisis hotline for sexual assault victims, and she was recognized in the credits of a recent “Grey’s Anatomy” episode on that subject.

In honor of her long career and both musical and social impact, Peabody will award Amos with this year’s George Peabody Medal for Outstanding Contributions to Music in America. Since 1980, when the medal was first presented, others winners have included Yo-Yo Ma, Isaac Stern, André Watts and Oscar Peterson.

“I am so honored to be receiving the Peabody Medal,” Amos said in a statement. “When I look back to my time at Johns Hopkins and then to where I am now, and to be receiving this prestigious award, it is truly overwhelming. The five-year-old inside of me is skipping with joy and gratitude.”

Peabody Conservatory’s 137th graduation exercises will begin at 10 a.m. on Wednesday, May 22, in Miriam A. Friedberg Concert Hall, and will be livestreamed. For more information, visit peabody.jhu.edu.