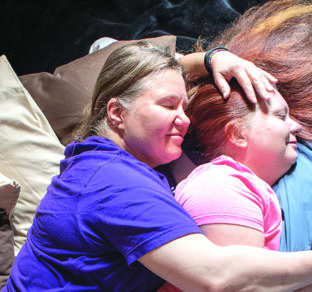 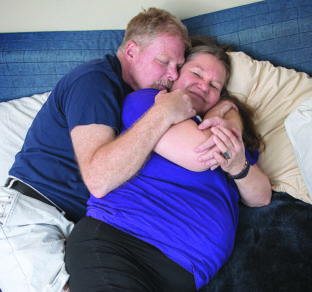 Annie Hopson of Ellicott City worked as a certified massage therapist for over 20 years. But she noticed that some clients seemed to yearn for something more.

“In my massage practice, I encountered people who were touch hungry,” she said. “They would have been better served by being held rather than kneaded” — but in a platonic way.

And then Hopson discovered the growing field of professional cuddling, defined by its practitioners as non-sexual touching for therapeutic purposes. It includes such things as hand-holding, hugging, stroking hair and spooning. Cuddling is “the latest thing in wellness beyond yoga and meditation,” according to a recent article in The New York Times.

Trained professionals, who call themselves “cuddlists,” make house calls, but also meet with clients on a one-on-one basis in home studios, on park benches, in movie theaters, etc.

There are also cuddling cafes and parties, including in nearby Washington, D.C., where strangers get together for group hugs. Cuddle shops have opened in California and Portland, Ore.

The fast-growing discipline, Hopson said, is “much more rewarding and different and important than I [originally] thought it was.” The 55-year-old single mother of two teenagers added, “I’m a ‘cuddlist’ because I know the magic of platonic touching.”

Some 400 professional cuddlers, including Hopson, have gotten their training through the website Cuddlist.com, where they learn the philosophy and hands-on practice of their new profession. The website also connects clients to providers.

Adam Lippin, the website co-founder who got Hopson interested in the practice, has noted that “most clients are under some level of duress — anxiety, stress, loss or need.”

Hopson said that most of her clients are between 35 and 50 years of age, but about one-third are over 50. She is, in fact, looking to find more older clients, possibly through senior centers.

Cuddlist.com, says that medical researchers have confirmed that touch and physical interaction with caregivers is a

decisive factor in seniors’ ability to recover from illness and to maintain a higher level of well-being.

But people of any age can benefit, cuddlists say. Here is how cuddling is seen by Dr. Daniel Yadegar, an internist, cardiologist and longevity specialist, who teaches at Cornell Medical College, practices at New York Presbyterian Medical Center, and heads the Scientific Advisory Board for Cuddlist.com:

“There is something transcendent about cuddling; it has the power to take energy from the outer world — human touch and intimacy — and influence our inner world, down to the molecular level.

“Cuddling can improve immunity, enhance mood, and serve as an energetic elixir for all patients, especially those with chronic medical conditions.”

There are also psychological benefits, for both the cuddler and the cuddlee.

When she was practicing massage therapy, Hopson noted that “some people wanted… to touch back, to hug.” It was not in a sexual way, she said, but as a means to connect on some deeper level. However, offering mutual touch during a massage session is illegal in Maryland.

“It was frustrating not to be able to serve my clients to their best interests within the bounds of my profession,” Hopson said.

“Touching is so very important. It’s been found that infants who are not touched will not thrive. Adults who do not have touching in their lives will also undergo a failure to thrive,” she added.

Hopson also noted that the professional cuddler benefits at least as much as the client from cuddling. Indeed, she said she sees cuddling as “a radical act of self-love that is shared with another or other individuals.

“When we make the conscious choice to nurture our bodies and feed our hearts through intentional touch…we show the world that we know we are worthy.”

A graduate of the University of Delaware, Hopson started out studying engineering, but found engineering was not the right profession for her. She discovered that the credits she had earned could go toward a degree in teaching mathematics and physics, and pursued that.

Meanwhile, “I was giving massages to friends and other students at the university to help them relax,” she said. “I saw that I had a real aptitude for it. I thought it was cool, that I could help create a deep relaxation within people.”

So after college, she went on to the Baltimore School of Massage, and practiced massage therapy for over two decades.

She sees her move into cuddling as a way to help others solve their problems as they come to understand their needs better through holding and being held.

The need appears to be growing. The percentage of U.S. adults who live without a spouse or partner has risen from 39 percent to 42 percent in the past 10 years, according to a Pew Research Center study.

One could even say cuddlists are engaging in talk therapy. “We are verbally touching also,” noted Hopson, referring to the meaningful conversations she has with her clients about their feelings and needs.

Her clients include both men and women.

She said that there are strict rules on what should or should not happen in a session. Before any touchy-feely begins, the client must speak by phone to her and agree that the session will not turn sexual; and that either can end the session at any time.

When the cuddler and the cuddled get together, permission is asked for and granted, or denied, on each move, Hopson said. “You make an offer: ‘May I put my head on your shoulder?’ ‘Would you like me to massage your back?’”

Sometimes, though, some sort of arousal may begin to take place, Hopson acknowledged. “When that happens, I tell the client to take a couple of deep breaths, and we do something else, find other ways to cuddle.”

Hopson spoke of the need in Howard County for cuddle parties. “I would love to teach people how to negotiate cuddling with one another.”

Not that the profession is a free for all. Clients pay cash for cuddles. Hopson’s rate for a one-hour cuddle session is $100, plus a $20 extra fee if she has to travel to the client’s home or a cuddling area outside her studio. She said she has a “sliding rate” for the less affluent.

She can be contacted through http://www.cuddlist.com/anniehopson.