A tour of country music’s highlights 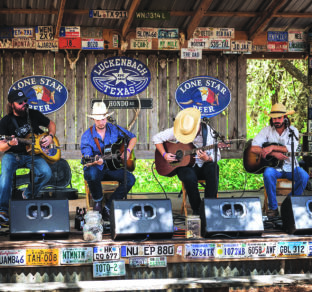 A country music band performs in Luckenbach, Texas, which is popular with tourists. The sleepy town, which had been abandoned in the 1960s, was made famous through a song by Waylon Jennings in 1977. Photo by Peek Creative Collective
PRINT 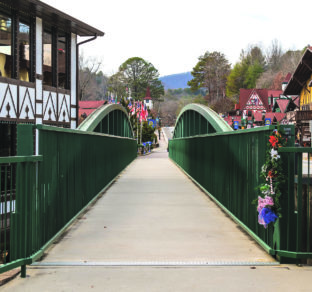 A bridge spans the Chattahoochee River in Helen, Georgia, an "Alpine village" in the northern part of the state. The river was made famous by Alan Jackson's award-winning song from 1993. Photo by Vadim Fedotov
By: Kristin M. Hall Posted on: November 12, 2019

Country music is a uniquely American art form, with its roots in the fiddle from European immigrants and the African banjo, all the way through its explosion as a commercial art form that has reflected the social, economic and cultural changes within our country.

Ken Burns took on the gargantuan task of telling the story of country music in his eight-part PBS documentary series Country Music, which aired in September.

Just as Burns and his filmmaking partners, Dayton Duncan and Julie Dunfey, sifted through hundreds of hours of footage and audio, there’s a wealth of accompanying material for aficionados who want to dig deeper into the music and the history.

The official soundtrack from Legacy Recordings comes in a five-CD box set, as well as other versions including vinyl and digital. There’s also a companion book called Country Music: An Illustrated History, by Duncan and Burns. Spotify has an enhanced playlist of music from the film, interview outtakes and more. (You can also stream the documentary by joining PBS’ Passport program for $10 a month.)

The storytelling of country music connects a wide swath of Americans from the East Coast to the West Coast, from North to  South.

For many country writers, their lyrics were inspired by real places and real people, adding authenticity to the melody. A scan of popular country song titles, from “Luckenbach, Texas,” “Okie from Muskogee,” “New San Antonio Rose” and “Folsom Prison Blues,” illustrates a country music road map of America.

If Burns’ documentary inspires music fans to hit the road, here are a few spots that you can visit that have been etched into country music lore and history.

There are few towns more steeped in country music history than this unincorporated outpost in Texas hill country. Willie Nelson and Waylon Jennings sang about yearning to go back to this place, a metaphor for small towns and simple times where “everybody’s somebody.”

But it wasn’t always that way. The town was abandoned in the ’60s and put up for sale. Hondo Crouch, an eccentric rancher, and his friends bought the town and reopened the dancehall.

But it was the crossover hit by Jennings in 1977 that not only put the outlaws on the map, but also this sleepy town. The dancehall is still a place to enjoy country music and cold beers and pick up some souvenirs.

One of country music’s biggest musical mysteries is what happened to Bobbie Gentry. Gentry’s No. 1 hit “Ode to Billie Joe” in 1967 turned her into a star with her swampy, Delta voice and her conversational lyrics about a boy who jumped off the Tallahatchie Bridge.

Nobody knows why Billie Joe jumped on that third of June, and Gentry herself became a disappearing act in the 1980s. But you can ponder those mysteries as you walk across the bridge in Money, Mississippi, about 10 miles from where she lived in Greenwood as a child.

Writer Tara Murtha, who wrote a book about Gentry’s debut album “Ode to Billie Joe,” said Gentry confirmed the bridge in Money was the one that inspired her song, although the original bridge collapsed in the 1970s and has since been replaced. If you visit Greenwood, look for a marker from the Mississippi Country Music Trail honoring Gentry as well.

Written by master songwriters Boudleaux and Felice Bryant, this bluegrass standard was originally recorded by the Osborne Brothers. It has since become an official Tennessee state song and the rousing fight song for the University of Tennessee football team, often played to excess.

The real Rocky Top is not at the football stadium, but instead it’s a rocky outcropping on the Appalachian Trail in the Great Smoky Mountains National Park. It’s not easy to get there, a steep, strenuous nearly 14-mile round trip hike. But if you make it, you’ll be treated to some of the most stunning 360-degree view of the mountains.

This now-defunct Western Kentucky town along the Green River was immortalized by John Prine in “Paradise” as an example of the impact of strip mining in Appalachia, a town literally ripped off the map.

Tom T. Hall and John Denver both recorded versions of the song, and Prine’s lament became a protest song for environmentalists.

In the song, Peabody Coal was responsible for the town’s destruction, and Peabody tried for decades to rebut the song. In truth, the town was purchased by the Tennessee Valley Authority in the 1960s, its buildings demolished and a coal-fired plant was built.

Decades later, TVA now plans to shut down the Paradise plant to try to shift to more efficient energy production. Today, there’s not much to see in Paradise but the plant’s three cooling towers, mounds of coal and a declining coal industry.

The toe-tapping river song “Chattahoochee,” which rhymes Chattahoochee with “hoochie-coochie,” was one of the biggest hits of Alan Jackson’s career, earning him two Country Music Association Awards and two Grammy nominations.

The iconic music video features Jackson water-skiing in ripped blue jeans and his white cowboy hat. The real Chattahoochee River is not far from where Jackson grew up in Newnan, Georgia, and forms the southern half of the Alabama and Georgia line.

Jackson, who grew up water-skiing, came up with the idea for the music video, and his jeans and the water skis were later donated to the Country Music Hall of Fame and Museum. However, because it was too cold at the time to shoot on the Chattahoochee when they made the video, most of the music video was actually shot on Lake Butler in Florida.

But the summer is the perfect time to visit this river, which is popular for recreation, including boating, fishing, rafting and of course water-skiing.

“Listen to the jingle, the rumble and the roar” go the lyrics to this early American train ballad that is the oldest song listed among the Rock and Roll Hall of Fame’s 500 songs that shaped rock ‘n’ roll.

This became Roy Acuff’s signature song, but it dates back much earlier than him. The original song was called “The Great Rock Island Route,” and credited to J. A. Roff in 1882 sheet music.

Later the name of the song was changed to “The Wabash Cannonball,” a reference to a major rail system that went from Detroit to St. Louis called the Wabash Railroad. It was also recorded by the original country music family, the Carter Family.

The Wabash Railroad is no longer chugging along, but portions of its tracks have been turned into nature trails in the Midwest. The Wabash Cannonball Trail is a 65-mile scenic trail system in northern Ohio that is open for hikers, bicyclists and horse riders.

In Iowa, the Wabash Trace Nature Trail is a 63-mile trail in southwest Iowa to the Missouri border where you can see remnants of ghost towns that once relied on the railroad.