An app that answers ‘What’s that plant?’ 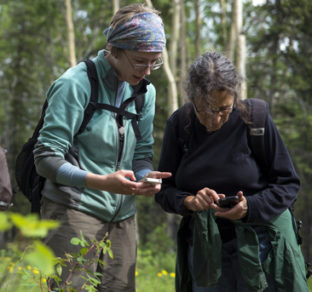 The ability to identify plants and trees was once the sole province of experts such as naturalists, botanists and master gardeners.

To this day, scientists are still discovering an average of about 2,000 new plants per year. Sometimes it can take years, even decades, for biologists to confirm whether one of those plants is a unique species.

Luckily, identifying garden-variety plants isn’t usually complicated. But it can still be daunting for those of us without specialized degrees. Plant identification apps can help.

On a recent hike through a soggy portion of the Nassawango Creek Preserve on Maryland’s Eastern Shore, I field-tested four plant identification apps on my mobile phone to see whether they offer a user-friendly experience and deliver reliable results.

From the comfort of my WiFi-enabled home, I had downloaded four apps: iNaturalist, PictureThis, PlantNet and PlantSnap. All of the apps were free. Or at least they started as free; PictureThis and PlantSnap began asking for money after I reached a certain number of identification attempts.

These apps all function more or less the same way: You snap a picture of a plant, upload it to the app, and it spits out its best guess at what you’re seeing. You can submit images of leaves, flowers, bark or the whole plant.

All of the apps I used depend on image-recognition technology to suss out a plant’s identity. But at least one supplements that information with actual humans — unpaid site contributors — who follow up via email with their own rulings. Their replies usually start trickling in within a few hours.

However, a common critique of such technology is that its ability to make accurate identifications hinges largely on the quality of the information you feed into it.

An example: If you take a blurry picture of a leaf belonging to a Joe Pye weed (Eutrochium fistulosum) — a stalky native bush with purplish flowers — you could wind up being told it’s from a different genus altogether.

The apps are finicky about photography. A whole leaf must be shown, not just part. A wilted flower is no good. A leaf silhouetted by the sun won’t work. Don’t be too far from or too close to your subject.

It’s not enough, then, to take a quick pic of some random leaf with your smartphone and move on. You must spend a little time with your plant or tree to find a good representative leaf.

How often do these apps agree? To find out, I took photos of nine leaves from what I believed to be different plant species along the hike. I re-used the same photograph for each plant in the apps.

Only once did all four apps agree on the identity of a plant. Apparently, with its dark-green, pointy leaves, American holly cuts a distinctive figure.

For some plants, I got four different suggestions. I tried a mushroom, and the apps replied:

PlantSnap: “Amanita franchetii, which doesn’t appear to grow on this side of the globe.”

iNaturalist: “Lumpy bracket, a fungi that at least pops up quite often in the mid-Atlantic.”

PictureThis; “Oops, I couldn’t find plants in the picture.”

None of the apps emerged as an overall “winner.” Clearly, the technology could use more time to mature, but the day is probably close at hand when software overtakes humanity when it comes to singling out greenery.

Far from being disappointed, I was still impressed with the apps. We now have in our pockets tools that can narrow down the identity of a plant out of tens of thousands of possibilities — and sometimes hit the mark.

Suddenly, before you know it, you are communing with nature. It’s like an open-ended scavenger hunt.

For eons, critics have been railing about how technology distances us from the wonders of creation. In a small way, these apps may help reconnect us, even if only for an afternoon.

Here’s a look at a few examples available on both Apple and Android phones:

PlantSnap (plantsnap.com): Uses image-recognition software powered by machine learning. More than 600,000 plants are in their database, representing 90% of known plants and trees. Free with ads. A premium, ad-free version is available for $2.99/month or $19.99/year.

iNaturalist (inaturalist.org): Uses image-recognition software backed up by crowd-sourced suggestions (emailed to you within hours or days). Operated by the California Academy of Science and the National Geographic Society. Linked to its own social network. More than 250,000 species represented (includes fish, birds, etc.). Free.

Jeremy Cox is a Bay Journal staff writer based in Salisbury, Maryland. You can reach him at jcox@bayjournal.com.