Area comics live for the laughter 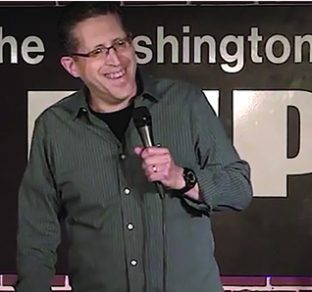 Jeff Hysen, a government employee, does stand-up comedy on the side. Photo courtesy of Mark Matusof
PRINT 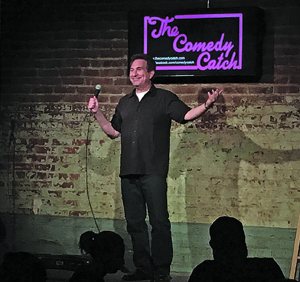 Comic Mark Matusof, a resident of Woodbridge, Va., traded his job as an engineer for stand-up comedy more than 25 years ago. He has performed in more than 40 states. Other area comedians keep their day jobs, or discover their knack for telling jokes after retirement, mining their everyday lives for material. Photo courtesy of Mark Matusof
By: Barbara Ruben Posted on: January 02, 2017

“I’m the oldest comedian of the evening,” begins the 58-year-old attorney from Silver Spring, Md. “I had a show recently, and before it began the other comics were asking each other about the effects of drug use on comedy. They asked me my opinion, and I said, ‘Lipitor has no effect.’

And the crowd erupts in laughter.

Hysen, who by day is a fed working at the General Services Administration, lives for these moments on stage.

“You can drive an hour to the show, and sit around an hour waiting for the show to begin. They often start late. Comedy is not often a timely profession. You sit there and think, ‘Why am I doing this thing?’

“You get on stage and even if there’s only 10 people there, when they’re laughing at your jokes, it feels great. My first thought is always, ‘I can’t wait to do this again.’”

As Hysen pointed out during his show, comedy is often the province of young people — both the performers and the audience.

But there are a number of stand-up comics over age 50 in the often buttoned-up D.C. area who live for the laughs.

“It’s not always easy,” Hysen admits. Age discrimination pokes up here as in so many other places.

“Sometimes people who put shows together think you’re too old, you’re not right for their demographic. It’s a bunch of nonsense. Funny is funny. I have to work hard to overcome that,” he said.

Hysen got his start in comedy in the late 1980s in his native New York.

“But life intervened. I got a new job in Washington, had children, and I put comedy aside.”

But years later, he saw an ad for something called the Funniest Fed contest. Even though he admittedly bombed during the contest, he found he so enjoyed being in front of the mic again that he’s honed his act and taken it on the road to New York and elsewhere.

Three years ago, he was even the subject of an episode of a TV show on the RLTV (Retirement Living TV) network called “Second Act” that profiles people in their 40s and 50s making career changes.

Like most comics, he mines his own life for his routines, including his wife, who also helps him write jokes.

“I’m always thinking about and wondering if something can be turned into material,” he said. “My son said my tombstone will have the epitaph, ‘Is this a bit?’”

See more at www.jeffhysencomedy.com, including a list of many local upcoming performances.

Like Hysen, Shirley Breeland also makes light of aging. A resident of Camp Springs, Md., she also worked for the federal government — for the last 18 years at the Census Bureau.

Breeland finally retired after 35 years with the government, and “realized I still had a whole lot of jelly left in my roll, so I decided to step outside my comfort zone, reinvent myself, and pursue stand-up comedy as a second career.”

To get started, Breeland took comedy classes at D.C. Improv, a local comedy club that also features a “comedy school.” She noted, but was not intimidated by the fact that, comedy is dominated not only by much younger comedians, but that most are male.

“One of the differences between me and younger comedians is I don’t feel any pressure. I have nothing to prove. I already have a pension,” she said. Without explicitly
divulging her age, Breeland said she recently got her Medicare card.

She started out volunteering to perform at senior luncheons and birthday parties, but started quickly to get calls to work for pay. She says she never does open mic nights at comedy clubs because she’s not a night person and is usually asleep before the shows even start.

Hysen also noted how hard it is to be on stage until midnight and then get up for work at 5:30 a.m.

Breeland, who performs under the stage name Simply Shirley, can be seen everywhere from churches and comedy clubs, to local chapters of AARP, senior centers and Foster Grandparents of D.C.

A sample of what gets her audiences howling:

“When [the announcer] said ‘for mature audiences only,’ you were expecting someone like Chris Rock, not Florida from ‘Good Times,’ right?

From Conan to cruise ships

Bengt Washburn initially intended to teach art after getting a bachelor’s degree in fine art and a master’s in painting. But nothing panned out.

Always one to find the humor in everyday life, he turned to comedy and has supported himself that way ever since.

The self-described introvert says being on stage “gives me an excuse to say what I want up there, whereas everywhere else you’re supposed to watch what you say — unless you’re running for president, and then you can say what you want.”

Many topics are fair game for Washburn to skewer, from politics, to fake news, to his upbringing in a large Mormon family in Utah, to family life that includes both his young children and grandchildren. Washburn is 52 and lives in Springfield, Va.

Like other comedians, he likes to joke about his wife, who recently retired as an officer in the Air Force.

Noting her recent desk job at the Air Force, he said that “means she gets up in the morning, puts on camouflage clothing, and then goes to an office and spell checks a paper while dressed like a bush….She should be going to work dressed as a file cabinet.”

Then he veers off into the somewhat risqué, adding, “The top drawer would be open on that file cabinet.”

Washburn has appeared on TV on Conan, Comedy Central and The Late Late Show with Craig Ferguson, and won the annual San Francisco comedy competition one year.

But he says all those high-profile gigs don’t mean it’s necessarily easy to get work at places like D.C. Improv and the Arlington Drafthouse.

“The resume should get me headlining there, but since I’m not young enough to star in a sit-com, I’m not from New York or L.A., agents aren’t interested in me. I can work off-nights there, but I never get to headline a weekend,” he said.

That means Washburn takes his act to venues around the country and on cruise ships, which usually attract an older demographic.

“What I like about that generation is they’ve lived stuff. They lived enough, they’ve been disillusioned, and they know they don’t know stuff now. We get each other. Young people sometimes in their 20s just don’t get it.”

A lifeguard for the gene pool

Another career changer is Mark Matusof, who worked as an engineer for the Navy for 10 years while starting to do comedy for fun.

“After a year or two, I started getting little paid gigs here and there around town. By 1990, I quit my engineering job because it was almost to the point I was holding down two jobs, day and night.

“I said, ‘Well, let me give it a shot. And I’ve been doing comedy ever since’,” said Matusof, who is 58 and lives in Woodbridge, Va.

He has performed in 40 states, on cruise ships, and now focuses a lot of his time on entertaining at corporate events.

Like the others in this story, he does “clean” comedy, with nothing very off color, and bases his routines on real life.

The joke continues with Matusof noting he “finds gene pool infractions every day,” with people texting and talking on the phone when driving.

“I was passed by someone on the Pennsylvania Turnpike, by a guy in a big Lincoln Continental — doing the crossword puzzle, not paying attention — who ran right smack into the toll booth.”

And now for the punch line: “Now that was irony. Lincoln takes out booth.”

That gets a huge laugh from the crowd at a comedy club.

“It’s a tough business,” he said. “But when you’re doing well, there’s a feeling of love, a feeling of real acceptance. There’s nothing better.”