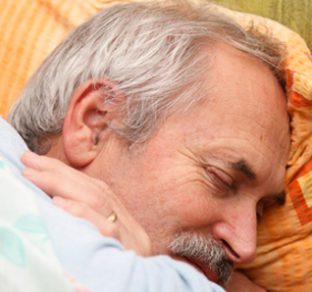 To sleep, perchance to… ward off Alz-heimer’s? New research suggests poor sleep may increase people’s risk of Alzheimer’s disease by spurring a brain-clogging gunk that, in turn, further interrupts shut-eye.

Disrupted sleep may be one of the missing pieces in explaining how a hallmark of Alzheimer’s — a sticky protein called beta-amyloid — starts its damage long before people have trouble with memory, researchers reported at the Alzheimer’s Association International Conference recently.

“It’s very clear that sleep disruption is an underappreciated factor,” said Dr. Matthew Walker of the University of California, Berkeley, who presented data linking amyloid levels with people’s sleep and memory performance. “It’s a new player on the scene that increases risk of Alzheimer’s disease.”

Sleep problems are treatable. A key next question is whether improving sleep can make a difference in protecting seniors’ brains. “Sleep is a modifiable factor. It’s a new treatment target,” Walker said.

Enough sleep is important for good health generally — seven to eight hours a night are recommended for adults. When it comes to the brain, scientists have long known that people who don’t get enough sleep have trouble learning and focusing.

And anyone who’s cared for someone with dementia knows the nightly wandering and other sleep disturbances that patients often suffer, long thought to be a consequence of the dying brain cells.

The new research suggests that sleep problems actually interact with some of the disease processes involved in Alzheimer’s, and that those toxic proteins in turn affect the deep sleep that’s so important for memory formation.

“It may be a vicious cycle,” said Dr. Miroslaw Mackiewicz of the National Institute on Aging, who wasn’t part of the new work.

Walker’s team gave PET scans to 26 cognitively healthy volunteers in their 70s to measure build-up of that gunky amyloid. They were given words to memorize, and their brain waves were measured as they slept overnight.

The more amyloid people harbored in a particular brain region, the less deep sleep they got — and the more they forgot overnight, Walker said. Their memories weren’t transferred properly from the brain’s short-term memory bank into longer-term storage.

What’s the risk over time? Two sleep studies tracked nearly 6,000 people over five years, and found those who had poor sleep quality — they tossed and turned and had a hard time falling asleep — were more likely to develop mild cognitive impairment: early memory problems that sometimes lead to Alzheimer’s, said Dr. Kristine Yaffe of the University of California, San Francisco.

Sleep apnea — brief interruptions of breathing that repeatedly awaken people without them realizing — caused a nearly two-fold increase in that risk, Yaffe said. She recommended that people at risk of Alzheimer’s be screened for sleep disorders, especially apnea, for which there are effective treatments.

“There’s a lot of evidence that we need to pay more attention” to sleep in seniors, she said.

Animal studies give clues to the biology behind these changes. Dr. David Holtzman of Washington University in St. Louis reported a series of mice experiments that found amyloid production is highest during waking hours and lowest during deep sleep.

Depriving mice of sleep spurred toxic amyloid build-up and, intriguingly, once those deposits began, the mice stayed awake longer on their own. Holtzman also checked Alzheimer’s other bad actor — the protein tau that forms tangles in the brain — and found the same effect on deep sleep.

Another hint came a few years ago, when University of Rochester scientists reported that the brain uses sleep to flush out toxic debris. They injected mice brains with amyloid and watched it clear faster while they slept.

The work comes as researchers hunt ways to prevent a coming wave of Alzheimer’s as the population ages, driven by the baby boomer generation that begins turning 70 next year. More than 5 million Americans already have Alzheimer’s, a number expected to more than double by 2050.

Changes that lead to Alzheimer’s can begin 20 years before memory lapses, and scientists are studying drugs in people at high risk in hopes of finding preventive treatment.

But so far, lifestyle changes are the main recommendation, and starting early seems important. Yaffe also reported that younger adults who get little physical activity have worse cognitive functioning by middle age.

In Sweden, Karolinska Institute researchers tracked down seniors’ long-ago report cards to find that school performance at age 9 or 10 predicted who was already building a better “cognitive reserve” to guard against later-in-life decline.

“There are lots of risk factors we might be able to change. Sleep is one,” said Alzheimer’s Association chief science officer Maria Carrillo. Together, she said, the new research emphasizes how “sleep is critical as we age.”