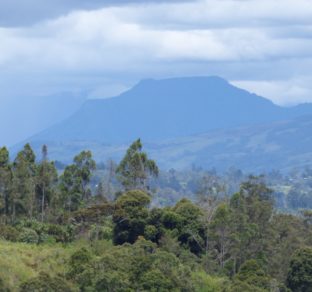 As the early morning clouds lifted, I aimed my binoculars at a branch about 30 yards away. Through the binoculars I spotted the iridescent aqua head and black tailfeathers of a bird-of-paradise — the Stephanie’s astrapia, according to Joseph, my birding guide.

I’m not a birder, but for a few moments at least, I understood why serious birders wake up early to hike miles for the thrill of seeing a small, beautiful creature in the wild.

The lodge is perched on a mountain ridge overlooking the city at an elevation of about 7,100 feet, so it is cool, not hot and steamy like the rest of the country. Every low-slung building with spacious suites and apartments offers panoramic views of the lush valley, steep hillsides, mountain peaks in the distance, and Mount Hagen below.

During the day, layers of clouds undulated over the scene, changing the view from moment to moment. At times it was almost clear, save for a cotton puff here and there. At other times the view was obscured by fog and mist. At night, the lights from the town twinkled below.

It poured every day of my four-day visit, mostly in the late afternoon and evening — sudden, intense cloudbursts with the sun shining just a few feet away. The pounding rain, plus the occasional thunder and lightning, added even more drama to the scene.

The main lodge opens up on patios, a koi pond, lush gardens and is surrounded by acres of forest for hiking, birding and contemplation.

I spent the first two days of my visit exploring the surrounding countryside and villages in the capable hands of my guides, James and John.

I did some of the usual tourist shtick, such as visiting a wigman village where two men dressed up in the elaborate wigs, decorations and face paintings of their tribe. The show was put on for my benefit, but they don’t just do this for tourists. The locals mainly do it for themselves to keep venerable practices alive.

We also visited a village where I viewed a collection of artifacts, including weapons, wigs and a grim collection of skulls. James assured me that these were not heads gathered by head hunters, but heads of people who died from other causes and were displayed to honor them and remind the other villagers of who they were. As for their origin, I’ll just have to take James’ word for it.

I also met the village chief, who was dressed in a traditional outfit including his pig tally, a necklace with sticks representing all of the pigs he has owned. From the length of his necklace, it was clear that the chief was a veritable Farmer John.

What I found most interesting, however, was learning about the everyday lives of the people. James took me to his village. As we walked along the path winding among the modest houses, huts and gardens of the village, he explained that every family owns a plot of land where they grow potatoes, sweet potatoes, cabbage, broccoli, taro, corn, bananas, strawberries, oranges, onions, coffee and other crops in the fertile soil.

“We plant it, it grows,” James said. They eat what they need and sell the rest at the bustling outdoor market in Mount Hagen. Many people also have pigs and chickens. This is not a rich country, but it seems that anyone who is willing to work hard won’t starve.

The morning of my final day at the lodge was dedicated to birding. Since the Western Highlands are primo birding territory, I figured I should at least give it a try.

The assistant manager of the lodge asked me if I wanted to do some serious birding or something more casual. Since “serious birding” required a 5 a.m. start and the more casual option began at 9, this was not a difficult choice.

After breakfast, I started hiking with my birding guide, Joseph, on one of the several trails that wind through the property. We headed up the ridge to a clearing with a platform to sit and look for birds. The ridges pierced through the clouds when they drifted lower.

Joseph set up a scope and aimed it at a distant tree. Soon he spotted a Superb Bird of Paradise. I looked at it in the scope, then found it in my binoculars. Following that were two Brown Cuckoo Doves. When the mist cleared, we spotted the Stephanie’s astrapia.

We hiked along the trail through the woods looking for more and caught a fleeting glance of a Bluebird of Paradise and a Common Smoky Honeyeater in flight.

We wandered a bit more through the forest in silence, following the sounds of birds chirping and calling. We didn’t see anything else, but it didn’t matter. It was so quiet and serene, like a slowly unfolding meditation.

I was, as the Japanese call it, shinrin-yoku, “bathing in the forest.” If that’s what birding is about, I finally get it. That was the best three hours of my visit.

Unless you’re a birder, Papua New Guinea might not be one of those places you feel compelled to visit before you die. But travelers willing to look beyond their bucket list will discover the beauty of the land and its creatures, and the warmth and determination of its hardworking people.

It’s best to travel after the pandemic ends. Round-trip airfare from D.C. to and from Mount Hagen is about $2,700.

The writer was hosted by Trans Nuiguini Tours, the company that owns the lodge. Contact them at service@pngtours.com.