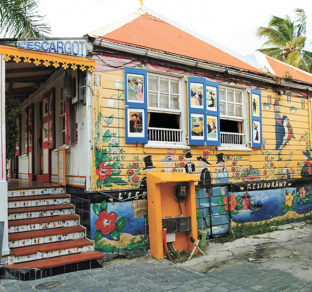 The French side of the French-Dutch island of St. Martin is known for having some of the best cuisine in the Caribbean. Photo by Cynthia Pyun
PRINT 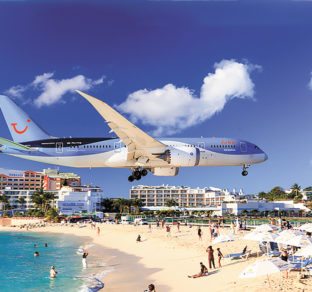 A Boeing 787’s low approach to Sint Maarten’s airport thrills tourists on Malo Beach, located on the Dutch side of the Caribbean island. Photo © Richair/Dreamstime
By: Victor Block Posted on: July 31, 2020

The tiny Caribbean island of French St. Martin and Dutch Sint Maarten offers tourists a chance for a traditional sun-and-sand getaway, but its unique dual culture keeps vacationers coming back year after year.

The 36-square-mile island is the smallest land mass in the world that’s shared by two nationalities. Approximately 60% of the land is part of the French Republic, while the rest belongs to the Netherlands — a division that dates back to 1648.

In a display of togetherness that can inspire the rest of the world, these two enclaves coexist in harmony. Just one example: No passport or border-checks are required to pass from one side of the island to the other. The only indications that you’ve entered another nation’s domain are small roadside welcome signs.

However, the atmosphere and ambience do undergo a dramatic change. Differences in lifestyle, language, cuisine and customs provide contrasting settings and experiences. One resident described the ambiance as a blend of Dutch conservatism and French joie de vivre.

In French St. Martin, for instance, sidewalk cafes tempt passersby with mouthwatering pâtisseries and other hard-to-resist sweets. Its capital, Marigot (population 5,700), resembles towns of similar size throughout France, with the added attraction of palm trees.

Fort Louis has looked out over Marigot Bay since 1789. The mighty fortress was built to protect warehouses that stored salt, sugarcane, rum and other goods from British and French pirates. Sugar was a major crop on the island during the 18th century, and the ruins of sugar houses are scattered about the countryside.

On the Dutch side of the island, casinos offer games of chance and skill, as well as nighttime entertainment. Sint Maarten is said to have more gaming machines per resident than any other country in the world.

Some casinos are hotspots for live entertainment, dancing and other leisure-time pursuits, including live sporting events beamed from around the world on big-screen televisions.

So much for the “Dutch conservatism” described by my acquaintance.

Philipsburg, the Dutch capital of the island, is bisected by two main streets, aptly though unimaginatively named Front Street and Back Street. They’re connected by a network of narrow alleyways with Dutch names reminiscent of Amsterdam.

The town’s restaurants and shops can be crowded, especially if one or more cruise ships has docked. The duty-free stores in Sint Maarten have long served as a magnet for people seeking discounts of 50% and even more on items ranging from jewelry, crystal and perfume to alcoholic beverages and cigars.

In addition to spending time in the two most sizeable towns, visitors should explore other island attractions by rental car, taxi or the mini-buses that link most points at very reasonable fares. It’s possible to drive around the entire island in about an hour, depending upon the traffic and stops to take in the scenery.

As it traverses the coastline of St. Martin and Sint Maarten, the main road ascends tree-blanketed hills and offers views of nearby neighboring islands.

It leads to tiny towns like Colombier, a village of Creole huts in a verdant valley, and French Cul de Sac, a cluster of red-roofed houses clinging to a hillside.

When it comes to dining, even many residents of Dutch Sint Maarten admit that the best food and restaurants are located in “la partie Française.” Gourmets often rank the island’s cuisine among the very best in the Caribbean.

Part of its appeal is based upon the combination of French flair with Dutch touches, augmented by traces of West Indian and Creole cooking.

Marigot on its own boasts enough restaurants to provide a different dining experience for weeks on end.

Then there’s the little town of Grand Case, which, despite its name, is anything but grand. The village consists of little more than a single road, but that street is lined with inviting places to eat, many of which have an inviting outdoor terrace overlooking the sea. Visitors may dine al fresco in a setting that in ways resembles Paris with palm trees.

In addition, there’s a lengthy list of other to-do’s on the island, including sailing, parasailing, windsurfing and scuba diving. As an avid snorkeler, I enjoyed swimming over multi-colored reefs and through teeming schools of colorful fish.

The warm, multihued waters of the Caribbean Sea that surround the island are home to a prolific variety of marine animals. There’s outstanding close-in angling off the beaches, along rocky stretches of shoreline and in saltwater grass beds, and deep-sea fishermen may rent charter boats to seek larger prey.

While golf is confined to the course at the Mullet Bay resort, that layout alone offers plenty for both duffers and low-handicap players to enjoy. Palm-tree lined fairways loop around a lovely lagoon, and unusually small greens challenge even the most practiced putters.

Tourists head for the broad beaches near the resort hotels, while locals trek to small, crescent-shaped beaches off the beaten track. A few adventurous souls who find those lesser-known gems take advantage of their isolation by losing their inhibitions, and their swimsuit, as they seek a full-body tan.

A personal favorite during my visit to the 36-square-mile island was Cupecoy, three itty-bitty beaches that hug a low cliff. These isolated beaches couldn’t accommodate a large crowd even if more people sought them out.

Adding to the island color at Cupecoy is Dany’s Beach Bar, a nondescript, open-air affair where owner Dany’s mother occasionally hangs out looking for someone to play dominoes.

If she challenges you to a game for money or drinks, be forewarned that the innocent-looking older woman plays a killer game. Your money would be better spent on an ample portion of barbecued ribs or chicken.

The island’s airport reopened in July, and round-trip flights from D.C. start at $584. Accommodations on St. Martin/Sint Maarten range from modest B&Bs to upscale hotels.

When I visited last year, I opted for a best-of-both-worlds option at the Sapphire Beach Club. It’s a timeshare and rental resort that has a restaurant, swimming pool and a full menu of activities like Caribbean barbecues, wine and cheese parties, and fitness classes. Rates for suites with a full kitchen, sitting area and outside deck begin at $136/night. For more information, visit sapphire-beach-club-resort-cupecoy.booked.net.

The island’s vast and varied array of restaurants include casual beachside cafes, white-tablecloth gourmet eateries and everything in between.

One caveat to keep in mind is that because many ingredients, other than fresh fish and some other local fare, must be imported, restaurant prices can be a bit higher than encountered on some other Caribbean islands.

The Rendez-vous at Porto Cupecoy, St. Maarten, has a pleasant courtyard environment. Appetizers include duck or lobster ravioli ($15). After enjoying both grilled red snapper with creole sauce and poached salmon ($22 with sides), I couldn’t decide which was my favorite seafood entrée. For more information, visit rdvlounge.com or call (721) 545-3070.

A less formal setting greets a mix of locals and visitors at the lunch-only Lazy Lizard Beach Bar in Philipsburg. Specialties include oxtail, conch and curry goat, served with sides for $18. Less adventurous eaters may prefer a fresh grouper sandwich with fries (also $18). Check lazylizardsxm.com or call (721) 520-4653.

For more information about the island, call 1-721-545-2179 or visit stmartin.org or vacationstmaarten.com.