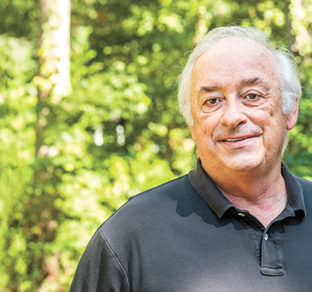 Nine years ago, Ron Fitzsimmons and his sister started a nonprofit, Alice’s Kids, named in memory of their mother, who raised them alone. The organization provides gift cards and gifts — from sneakers to prom dresses — to underprivileged children in the D.C. area and beyond. Photo by Rey Lopez
PRINT

When Ron Fitzsimmons was growing up in the 1960s in West Islip, New York, his father left his mother and their three children. With just $250 a month in welfare benefits, barely enough to cover food and rent, his mother cleaned houses and took in ironing.

In middle school, Fitzsimmons had to wear the same shirt for days, enduring schoolmates’ taunts. One year, he missed 67 days of school because he didn’t want to be humiliated.

Fast forward to 2011. Ron was talking with his sister, Laura Fitzsimmons Peters, about their childhood.

“Remember when Mom went out and got a job and made $10? We were so excited because she could buy us a new pair of sneakers,” Peters recalled.

At the time, Ron was retired and working as a substitute teacher at Mount Vernon High School. One day he found a girl crying because she could not afford a prom ticket, so he bought it for her.

At that moment, an idea formed: Find a way to provide the small things youngsters need.

Spotting a niche in the world of charity, Fitzsimmons and Peters co-founded a nonprofit, Alice’s Kids, named after their mother.

The Virginia-based organization has helped children in 34 states and the District of Columbia. Its goal is to raise needy children’s self-esteem by providing what might seem “life’s little things.” But to these children, they are very big.

“It makes kids feel like kids, and helps them forget about the stressors in their lives, like Mom losing her job or not having enough to eat.”

The organization takes requests from teachers, social workers, police officers and counselors to help children from kindergarten to high school. (They do not accept requests from parents or the public.)

The applicant describes the family situation and requests certain items. Fitzsimmons provides gift cards, often to Walmart or Target, to the liaison, explaining that the card is to be used only for the item requested.
The teacher or social worker then gives the gift card to the parent.

The average grant is around $100. The organization’s motto: “A little help can go a long way.”

For something like summer camp, Fitzsimmons writes a check to the appropriate entity. The children never know they are getting charity, which “preserves the kids’ dignity, and the parent has a chance to shine,” he said. “I feel like Santa Claus every day.”

Around 80% of funding comes from individual donations, with the rest from local service groups such as Rotary and Kiwanis Clubs.

The organization got a huge boost in 2019, when the Washington Post’s Theresa Vargas published two articles about its work. Word spread, and donations poured in.

A few celebrities have joined the effort, including comedian Patton Oswalt and talk show host Jimmy Kimmel, who made a pitch in May. Actress BeBe Neuwirth, from television’s “Cheers” and “Frasier,” also endorsed them.

Alice’s Kids has more than 20 partnerships with other nonprofits, such as the National Association of Social Workers, Communities in Schools, Ronald McDonald House and local groups like United Community and the Fairfax County Police Department.

The organization’s heart is the network of almost 500 teachers, counselors, social workers and others in the Washington, D.C., region who work with children in need. (Although 90% of their work is local, after the Post article, they got requests from all over the U.S., so they have tried to respond to those needs, too.)

In many cases, the children’s families are in crisis. They’ve lost their home, there’s domestic violence, or a parent is in legal trouble.

One family in Northern Virginia asked for an air mattress, so they wouldn’t have to sleep on the floor, using towels for blankets and pillows.

Other children needed appropriate clothes to wear to their parents’ funeral. One teenager could not graduate because she owed money to the school cafeteria.

When children experience indignities or embarrassment, problems can mushroom into missing school, performing poorly academically, misbehaving and even suicide. Providing these small items can improve their self-esteem and help them feel that they fit in, Fitzsimmons believes.

With schools closed this spring because of the coronavirus pandemic, teachers and social workers had less regular contact with students. Some teachers worried that children would stop reading, so Alice’s Kids bought and mailed three books to each child.

“Thanks to their work, struggling families have been pleasantly surprised with financial support to boost the self-esteem of their children and have improved their children’s ability to learn and succeed.”

Astromelia Cadogan works with Alexandria’s immigrant and homeless families. Some children she’s helped were living in a relative’s living room; others were in homeless shelters.

Cadogan is moved by parents’ gratitude and children’s reactions. When she gave a gift card to a single father of four who needed children’s clothing, he told her, “You just don’t know what you have just done for us.”

Latoya Hansford with D.C.’s Department of Human Services has seen similar reactions. She’s seen kids break down in tears or get jubilant over a pair of shoes. “It’s overwhelming joy,” she said.

Fitzsimmons has worked for three members of Congress, lobbied for women’s reproductive rights, and worked for former Fairfax County Board of Supervisors member Gerry Hyland. But for him, running Alice’s Kids is the best work he’s ever done.

The small things, it turns out, are very significant.