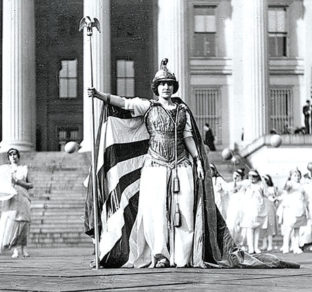 Celebrate the 19th Amendment's centennial with a tour of local sites. Photo by Library of Congress
PRINT

On March 3, 1913, Inez Milholland, astride a white horse and dressed in a white Cossack suit and white boots, led an unusual parade down Washington, D.C.’s Pennsylvania Avenue. With “Liberty, Equality, Fraternity” banners fluttering in the wind behind her, Milholland led between 6,000 and 8,000 women, along with 10 bands, 26 floats, and six golden chariots in the Woman Suffrage Procession.

“This was the first March on Washington,” said Rebecca Boggs Roberts, author of Suffragists in Washington, D.C.: The 1913 Parade and the Fight for the Vote.

The unprecedented parade through the capital was a dramatic event in the 72-year campaign to grant women the right to vote.

In August, America marked the centennial of the 19th Amendment, which guaranteed that right. The D.C. area was a hotbed in the suffragists’ struggles of the late 19th and early 20th centuries. Several local landmarks tied to the suffragist movement are easy to visit.

The 1913 suffrage march was pure pageantry. The program read, “We march in protest against the present political organization of society from which women are excluded.”

Milholland, calling herself “the free woman of the future,” invoked the image of Joan of Arc. The U.S. Treasury building, next to the White House, was the stage for an elaborate tableau featuring robed women representing Liberty, Justice, Charity, Hope and Peace.

However, the marchers were met with jeers, shoves and spitting, mostly from rowdy men who labeled them “unwomanly,” “unsexed” and “shameless,” while police looked on indifferently.

Upon arriving at Union Station by train on parade day, which was also the day before his inauguration, President-elect Woodrow Wilson was met by only a few fans.

“Where are the people?” he asked. The answer: “On the avenue, watching the suffragists’ parade.”

As Wilson resisted supporting women’s right to vote, the National Woman’s Party devised a new tactic in 1917 that they called the “Silent Sentinels” — a “perpetual delegation” on the White House sidewalk. It was, according to The Suffragist newspaper, “the first time in history the President of the United States is being picketed.”

Thousands of women in purple, gold and white sashes stood silently in all kinds of weather, hoisting banners that asked, “Mr. President, how long must women wait for liberty?”

With World War I well underway, the suffragists denounced Wilson’s fight for democracy abroad while denying it at home. In 1918, Wilson relented and justified backing a suffrage amendment as “a necessary war measure.”

Unhappy with Wilson’s lukewarm support, however, in 1919 women began burning his speeches in Grecian urns on the White House sidewalk and in Lafayette Park, weathering attacks by men and infuriating officials.

One of the suffragists’ boldest acts was burning Wilson in effigy because he and his party, they charged, held women “in political slavery.”

A monument to equality

The Belmont-Paul Women’s Equality National Monument served as the headquarters of the National Woman’s Party, founded by Alice Paul. The three-story brick house at Second Street and Constitution Avenue, N.E., sits in the shadow of the Senate’s Hart Office Building, the Supreme Court and the Capitol.

Built in 1800, the house was the epicenter of the suffragists’ campaigns. The museum houses memorabilia, banners and attire associated with the 19th amendment and the Equal Rights Amendment, which Congress passed in 1972 but is not yet ratified.

The museum is currently closed due to the pandemic. At other times, by appointment, visitors can read The Suffragist newspaper and National Woman’s Party scrapbooks which detail tactics, setbacks and successes.

Many members of Congress were not supportive of the suffrage amendment for decades. Legislators introduced the first Constitutional amendment suffrage bill in 1878; however, Congress did not approve it until 1919.

Three famous suffragists, memorialized in marble, joined the statues of mostly white men in the Capitol rotunda in 1997, after sitting in the Capitol’s basement crypt for 75 years.

The “Portrait Monument,” nicknamed “Three Ladies in a Tub,” is a 1921 sculpture of activists Elizabeth Cady Stanton, Susan B. Anthony and Lucretia Mott, none of whom lived to be enfranchised.

Of Statuary Hall’s 100 statues and busts, only a dozen depict women. Jeannette Rankin’s statue was added in 1985. Elected to the House of Representatives from Montana in 1916, Rankin, an advocate for women’s rights and peace, was the first woman to serve in the body.

Eight suffragists are buried in the 35-acre Congressional Cemetery on E Street, S.E., including Winifred Mallon, a founder of the Women’s National Press Club; Marguerite DuPont Lee, of the Delaware DuPont family; and Belva Lockwood, the first woman licensed to practice law, the first woman allowed to argue before the U.S. Supreme Court, and, in 1884 as a presidential candidate for the Equal Rights Party, the first woman to run on a major party ticket.

In 1917, the Washington, D.C., police started arresting women who were peacefully picketing on the White House sidewalk for “obstructing traffic.”

From 1917 to 1919, the police arrested more than 200 women ages 19 to 73. They hauled 70 of them to jail in the Occoquan Workhouse, 25 miles south of Washington in Lorton, Virginia. Guards beat them and fed them hard bread and maggot-laden soup. When some women went on a hunger strike, jailers force-fed them an egg mixture through a tube in their nostrils to prevent them from dying as martyrs.

On the night of November 15, 1917, the “Night of Terror,” prison officials beat and dragged some women out of the dormitory-style quarters and slammed them into jail cells alongside prostitutes, thieves and drunks. One woman suffered a heart attack. Historians view the Night of Terror as a turning point in the struggle for passage of the 19th Amendment.

The workhouse no longer stands, and an arts center now occupies the land where the jail used to be. The Lucy Burns Museum at the Workhouse Arts Center tells the story of the movement and the suffragists’ incarceration.

“The suffragists lived in very different time. There was no glass ceiling. They were in a box, locked in tight,” said Kathleen Pablo, a Turning Point Suffragist Memorial supporter.

In 2021 a new national memorial, the Turning Point Suffragist Memorial, will open in Fairfax, Virginia. It’s important, said Patricia Wirth, executive director of the memorial, because the struggle of “suffragists who fought and won the right for American women to vote was essentially a 72-year, bloodless revolution that resulted in the greatest expansion of democracy in a single day the world had ever seen.”

On August 24, 1920, Tennessee became the 36th state to approve the amendment, thus ratifying it as the law of the land. The original 19th Amendment to the U.S. Constitution is on display until Jan. 3, 2021.