Divide perennials to expand your garden 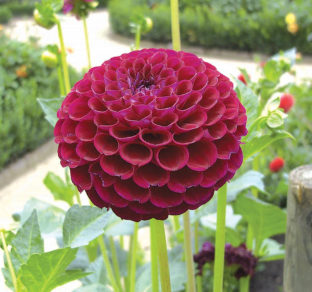 With political polarization dominating the news, maybe you’d like to know how division can be a positive thing — when it comes to perennials, that is.

Why divide perennials, those plants that return each year? Many perennials left undisturbed for more than three years become overcrowded, unsightly and needy. The center of the clump becomes either hollow or weak, and the flowers might be skimpy or smaller than normal.

Splitting a perennial into multiple plants helps the plant perform better by stimulating new growth and blooming. Dividing creates more space for roots to reach, rather than compete, for nutrients and water. It can also help manage plant size.

Additionally, division is an inexpensive way to increase the number of plants in your garden.

As gardener Gertrude Jekyll writes, “We garden-lovers are greedy folk, and always want to have more and more and more!”

Plant divisions elsewhere or give extra plants to your greedy gardener friends.

When should you divide perennials? In general, divide spring and summer blooming perennials in fall, and fall bloomers in spring. By dividing the plant when it is not flowering, all the plant’s energy can go to root and leaf growth.

Spring division is ideally done in the early spring as soon as new growth has emerged. Although spring-divided perennials often bloom a little later than usual, they have the entire growing season to recover before winter.

Avoid dividing perennials on hot, sunny days. Preferably, wait until a cloudy day with several days of spring showers in the forecast.

Stagger plant divisions so the whole garden will not be redone at the same time. If plants are growing well, leave them alone unless you’re greedy for more.

Preparation, the key to success

Prune the stems and foliage of the parent plant to about six inches from the ground in order to ease division and to reduce moisture loss. Clean your tools with a disinfectant spray.

Using a sharp pointed shovel or spading fork, dig up the parent plant on all four sides approximately four to six inches away from the plant. Pry the plant out of the ground, lifting gently and removing any loose dirt around the roots.

Separate the plant into smaller divisions by the appropriate method (see below). In all cases, keep the divisions shaded and moist until they are replanted. Refill the original hole with the same amount of soil and perennial mass that was removed.

How do you make the divisions? Perennials have several different types of root systems. Each of these needs to be treated a bit differently.

Those with spreading root systems have many thin intertwined roots that originate from many locations. These plants include aster, monarda (aka bee balm), lamb’s ear and echinacea (aka purple coneflower). Some can be invasive unless divided frequently.

They can usually can be pulled apart by hand or cut apart with shears or a hori-hori knife. For extremely tangled roots, you may need to place two digging forks back-to-back in the center of a plant to pry the pieces apart. Separate the plants into three to five healthy shoots each.

It is often necessary to cut through the thick fleshy crowns with a sharp knife or to pry the roots apart with digging forks. Keep at least one developing eye or bud with each division.

For those plants with tough, vigorous root systems, such as red-hot pokers and large ornamental grasses, you may resort to a shovel, saw or ax. Two techniques to loosen the root mass include hosing soil off the root ball and/or raising the clump one to two feet off the ground and dropping it.

Bearded iris has rhizomes, stems growing horizontally at or above the soil level. Cut and discard the older rhizome sections and damaged rhizomes that can’t be trimmed.

Iris divisions should retain a few inches of rhizome and one fan of leaves, trimmed back halfway. Replant with the top of the rhizome showing just above soil level.

Some perennials such as dahlias have tuberous roots. Cut the tubers with a sharp knife. Every division must have a piece of the original stem and a growth bud attached.

Underground running roots are also known as suckers. Perennial geraniums (aka cranesbill) have this system. Cut away the suckers from the mother plant and transplant them, or dig up the mother plant to separate it into pieces with suckers already forming.

United we stand, divided we fall

Older Lenten roses (Helleborus) are very difficult to move; however, tiny seedlings around the base are easy to transplant. Unless you want to increase your stock, bleeding hearts and peonies, for example, may never need to be divided.

For a list of perennials with specific division advice, go to bit.ly/todivideperennials.