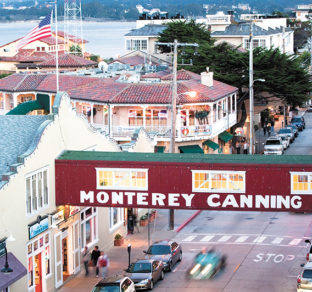 Cannery Row, above, got its name from John Steinbeck’s 1945 novel, not the other way around. Many of its former fish processing plants have been converted to restaurants, shops and wine bars. Photo by SeeMonterey.com
PRINT 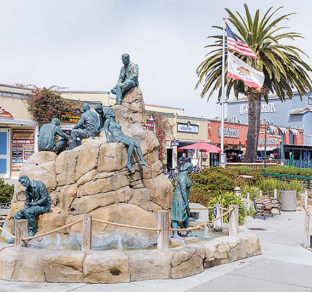 Steven Whyte’s Cannery Row monument in effect honors its important fish in bronze as well as the rowdy characters of Monterey’s fish-packing heyday. Steinbeck is immortalized, too, surrounded by eight others, including the prosperous “Madam” Flora Woods, who ran the Lone Star Café and house of ill repute in the sardine-canning days. The monument also honors Chinese fishermen and four entrepreneurs who revived Cannery Row. Photo © Peter Svec/Dreamstime
By Glenda C. Booth Posted on July 31, 2020

[Editor’s Note: Given the worldwide reach of the coronavirus and the fact that COVID-19 cases in California and elsewhere are still rising, this is not the time to travel there (or possibly anywhere) for enjoyment. Statewide, many parks and beaches are temporarily closed or have very limited access.

Please enjoy this article as armchair entertainment and for planning your future travel in healthier times.]

For Monterey, California, a tiny silver fish has brought both fame and infamy.

In the first half of the 20th century, the pungent scent of sardines wafted from the town’s booming canneries and powered its economy, prompting town leaders to trumpet Monterey as “the sardine capital of the world.”

Today, Cannery Row has been repurposed with trendy shops, restaurants and one of the country’s finest aquariums.

Located on the southern edge of Monterey Bay on California’s central coast, Monterey has a balmy Mediterranean climate and a mix of outdoor recreation, seafood restaurants and rich history.

For centuries, the Rumsien Native Americans lived on the Pacific Coast, where they fished for sardines, anchovies and rockfish, crafted abalone-decorated baskets, and thrived on local plants and wildlife. That is, until the Spanish arrived with livestock and new diseases.

By the mid-1800s, the town was California’s main port. That’s when an entrepreneur named David Jack sold some cheese that some say he stole from area Franciscan friars. At some point, it became known as Monterey Jack cheese, another bragging point.

Today the town’s Spanish-Mexican heritage is preserved in 21 historic adobes. Nineteenth-century author Richard Dana wrote that the adobe buildings sparkled in the sun because of their ground-up abalone shells.

Monterey State Historic Park preserves and interprets 12 such buildings, including the Custom House, the oldest government building in California.

Starting at the park’s headquarters in the Pacific House Museum, visitors can amble along a marked two-mile trail and see a whalebone sidewalk, historic gardens and adobes.

At the Cooper-Molera Adobe, built in 1827, visitors learn that early locals made sun-dried adobe bricks from clay soil, straw, crushed seashells and horse manure. Its garden has a working, beehive-shaped oven, called an horno, which originated in Spain.

The Joseph Boston Store in the Casa del Oro, built in 1845, was the first general store in Monterey; it now sells 1850s-themed merchandise, such as artisan soaps, elderberry syrups and balsamic vinegars.

At the Custom House in 1846, Commodore John Drake Sloat raised the American flag and claimed more than 600,000 square miles of territory for the United States, ending Mexican rule without firing a shot.

Exhibits explain that Boston seafaring merchants brought iron tools, bear traps and metal buckets to locals. They paid $1 each for cattle hides, which they sold to belt-makers for $10 each in Boston in the 1800s. The Russians came for the region’s otter pelts, and Chinese traders brought goods like firecrackers and dishes.

The free Museum of Monterey explores the town’s connection to the sea, with exhibits on the cannery workers, nautical memorabilia, boat types, a Fresnel lighthouse lens from Point Sur, and a tutorial on sardine fishing, processing and packing.

At the industry’s height, there were 19 canneries and reduction plants employing hundreds of workers. (Reduction plants convert fish into feed meal, oil and other consumer products.)

During World War I, the canneries shipped 1.4 million cases of sardines to troops. They had another boom in World War II.

The sea is both indoors and out at the world-famous Monterey Bay Aquarium, where 100 exhibits highlight the beach, ocean and wetland habitats of a full range of marine life, including sea slugs, jellyfish, sea turtles, limpets and anemones.

In an underwater kelp forest, “the redwoods of the sea,” divers plunge into the glass tanks to feed the fish and talk to visitors from underwater. Visitors can also watch sea otters and penguins eat and play. An aviary has shorebirds and two species of penguins, tufted and horned.

There’s plenty of life outside the building, too — tidal pool critters darting around, common murres skimming the surface, kingfishers and cormorants diving, and brown pelicans flapping or perching on the rocks. With museum scopes, tourists can scan the ocean for whales, seals and sea otters.

The Monterey Bay National Marine Sanctuary is known as the “Serengeti of the Sea” for its rich wildlife diversity. It’s the site of North America’s biggest and deepest underwater canyon, plunging more than two miles deep, and one of the largest kelp forests in the U.S.

In this 6,100-square-mile sanctuary, there are 334 known species of marine mammals, more than 180 species of sea and shorebirds and at least 525 species of fish.

In the 19th century Point Sur Light Station, situated on a large volcanic rock promontory 316 feet above the ocean, docents tell tales of lighthouse keepers, and explain the importance of lighthouses to seafaring vessels.

Here, if you look really hard, you might spot a sardine shimmering in the water.

Currently, one-stop flights from D.C. to Monterey in September start at $240 round trip on American Airlines. Check cdc.gov for current travel recommendations.

To plan your trip, visit seemonterey.com or Monterey.org. There are many guided tours available to explore the region’s history, food, wine, movies, gardens and whale watching.

If you can’t travel now, get a glimpse of Monterey Bay’s spectacular wildlife from home. At montereybayaquarium.org/animals/live-cams, viewers can explore kelp forest life, “swim” with sharks and sea turtles, and watch moon jellies open and close like fancy, upside-down parasols.

At elkhornslough.org/ottercam, you can watch otters, including playful pups, at Elkhorn Slough.