During pandemic, she wrote three books 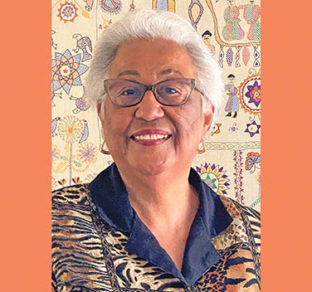 At a certain point in life, we want to finish the story.

That was Dr. Daryl Cumber Dance’s thought. Upon retirement from a career as a professor of English, Dance had been asked to send her papers to her alma mater, the University of Virginia.

As she went through her extensive collection of writing, Dance found projects unfinished and things unsaid. She realized she didn’t want anyone else to write the endings that only she could accurately provide, so she got to work.

Dance, 82, is a well-known authority on African American folklore as well as a university professor and author of more than 16 books. She came from a family of women teachers and began writing in childhood.

In college in the 1970s, she was the first black woman to graduate from UVA with a major in English. During her long career, she taught English for 20 years at VCU and 20 years at the University of Richmond.

Between 1985 and 2002 Dance wrote eight books, establishing herself as a source and expert on Southern Black folklore and culture. In the late 90s, W. W. Norton & Co., a major New York publisher, contacted her and asked her to write a book on that subject.

That book, a collection of essays titled, Honey, Hush: An Anthology of African American Women’s Humor, became one of Dance’s favorites. Critics lauded the book, too, as did readers. One reader described how much he enjoyed reading the book before bed, saying, “I go to sleep with a smile on my face every night.”

But last year, in no small part due to COVID-19 restrictions on her activities, Dance focused all of her attention on projects that had been brewing in her mind for decades. While we all huddled inside waiting for the pandemic to end, Dance was hard at work, producing three books in one difficult year.

Fiction fills in the blanks

Dance had many family tales and stories from her early years that she wanted to share. She previously wrote about her genealogy in the 1998 book The Lineage of Abraham: The Story of a Free Black Family in Charles City, Virginia. However, most of the stories were fragmented, unfinished.

Taking a second look at her book, Dance felt frustrated that she could not find enough information to finish the stories. “I so wanted to know the souls of these people,” Dance said.

So, she followed Nobel Prize-winning author Toni Morrison’s advice: “On the basis of some information and a little guesswork, you journey to a site to see what remains were left behind and to reconstruct the world that those remains imply.”

Inspired, Dance used fiction to breathe life into these long-lost characters. She mixed truth and fiction to complete their lives in her new book, Land of the Free…Negroes: A Historical Novel.

Enjoying the creativity of that project, Dance then decided to write about widowhood. She had lost her husband in 2011 and knew firsthand the impact of that loss. Her own father died when she was nine.

Learning about her mother, grandmother and other relatives who lost their husbands early in life — and had to survive financially and emotionally as single mothers — helped her navigate her own widowhood.

In Till Death Us Did Part, Dance creates four characters drawn from her life experience and reflects on the challenges, pain, lessons and strengths of widowhood.

Finally, she published Here Am I, a collection of short stories, reflections and responses to the past year’s changes and losses resulting from the pandemic.

That book centers on how the virus has affected her life and others’ lives, while also addressing gender, race and aging. Dance includes her perspectives and strategies, as well as the discoveries she made — like the existence of a sister, unknown for decades, who became her friend, only to die of COVID-19.

After several decades of sharing her writing, Dance was finally able to finish stories that had remained unfinished and to create several new ones.

Her new works reflect the span of her life’s experience. Above all, she sees herself as a keeper of stories and a teacher of Black American literature.

“I collect folklore. I teach literature. Recently, I have begun to write fiction,” she said. “My major commitment, however, is introducing the lesser-known canon of Black American literature — oral and written.”

To would-be writers, Dance has some advice: