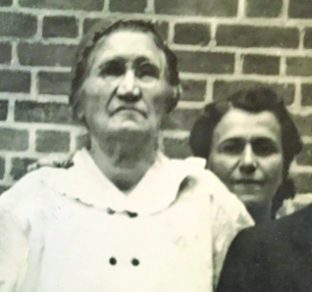 Woolf and Toba Singer (foreground) lived in the Yaazor agricultural community outside Ellicott City in the first years of the 20th century. The Howard County Historical Society is putting together an exhibit about this settlement of 200 Russian-Jewish immigrants, which disbanded in the 1930s. Photo courtesy of the Howard County Historical Society
PRINT

For the Howard County history books: Even before early Israeli settlers established collective agricultural communities (kibbutzim) there in 1909, Russian Jews attempted something similar in the early 1900s along the Patapsco River outside of Ellicott City.

The evidence is in the exhibit being put together at the Howard County Historical Society museum by Dustin Linz, the museum manager, who also is busy doing research on the Yaazor agricultural settlement for a master’s degree thesis.

“In Hebrew, Yaazor means ‘God will help’,” Linz said. That was a fitting name, as those who settled at Yaazor had little farming knowhow.

While they longed for a new way of life, “The immigrants were not skilled farmers, and they had to hire farmers from outside the community” to help them, Linz said.

The settlement, which grew to include 29 families — some 200 residents who spoke only Russian and Yiddish — disbanded in the early 1930s.

Debra Weinberg, whose great grandparents were among the original Yaazor settlers, noted that they were eventually attracted to the big cities, like Baltimore, where many moved and set up businesses.

“Later generations had no interest in carrying out the dreams of their parents,” Linz added.

A 1906 article appearing in the Baltimore Sun headlined “Russia in Maryland” noted that a colony of Russian-Jewish immigrants had settled “three miles west of Ellicott City” to  “live a secluded life in their own peculiar way, free from the rush and bustle of the world, and with a freedom of speech that was impossible in [their native] Russia.”

Linz noted that his research found the reasons for the immigration extended beyond a desire for free speech. Massacres of Jews across Russia — known as pogroms — were occurring at the time.

In 1891, the Jewish Colonialization Association was formed in London, to, among other things, help Jews emigrate from anti-Semitic countries in general, and from Russia in particular.

The association — founded by Baron Maurice de Hirsch, a German-Jewish financier and philanthropist — purchased land for the immigrants around the United States, as well as in Argentina and Brazil.

In recounting how the original settlers lived, the Sun noted that “the spirit of fairness pervades the entire conduct of the community. If any land is sold to a new settler, the proceeds are placed in the public treasury, to be applied to the payment of the mortgage.”

The article continued: “The spirit of freedom, cleanliness and industry pervades the whole community. There are no idlers. Everyone is busy in the fields or in the homes. Only the younger children seem to have time to play.”

Another Sun article, in 1991, said one survivor described the life in Yaazor as “a kind of Fiddler on the Roof shtetl (village) in America.”

The 351-acre tract purchased by the association and turned over to the farmers, who paid $1 a week to help pay the mortgage, was located between Johnnycake Road and the Patapsco River. Patapsco State Park now occupies some of the land of the original colony.

He noted that the few Jewish families in the area at the turn of the 20th century faced such difficulties as having to obey local laws requiring stores to be closed on Sundays, which created financial hardship when they also wished to close on Saturdays, the Jewish Sabbath.

Jewish weddings in Ellicott City, he said, were held in Caplan’s Department Store, now shuttered, but whose sign lingers on the store’s building on Main Street.

The small Jewish population of Howard County in the early decades has grown substantially — to 17,200 in 2010. In fact, Linz’s research has shown that during the 1980s, Howard led all counties in the nation for Jewish population growth.

The museum, which has been closed for several weeks for its yearly maintenance, reopens Jan. 27 at 1 p.m. The Yaazor exhibit will be part of the museum’s permanent displays.

Currently on display are photos, maps and written material. Linz said he will be adding further artifacts about life in the settlement.

Shawn Gladden, executive director of the county’s historical society, noted that while the exhibit now is small, “it does tell part of a story that not a lot of people know about.”

The museum is located at 8328 Court Ave., Ellicott City, and is open Fridays, Saturdays and Sundays from 1 to 5 p.m. Admission is free, but donations are appreciated. Memberships with additional benefits are also available.