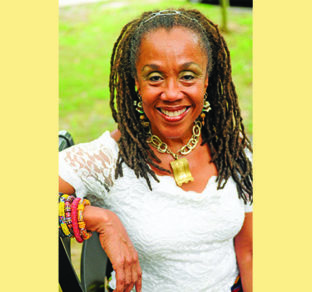 Janine Bell founded the Elegba Folklore Society in 1990, naming it after the Yoruba spirit “who opens the roads, bringing clarity out of confusion,” according to its website. This year, the society’s annual weeklong Capital City Kwanzaa Festival will be presented virtually starting on Dec. 26. Photo by Jarrid Jones
PRINT

At the gateway to the historic black community of Jackson Ward, a light-filled, street-level building is brightened by the colors of Africa: rich reds, yellows and greens.

This is the headquarters of the Elegba Folklore Society, a cultural arts organization at 101 East Broad Street, whose mission and outreach are different from other Richmond museums.

This month, the society will host its annual Kwanzaa Festival virtually. Kwanzaa, a non-religious celebration from December 26 to January 1, honors African Americans’ roots.

Growing up in Greensboro, North Carolina, Bell knew nothing about her African roots. “My parents did not know their African heritage, and their parents didn’t know about it. It wasn’t discussed,” she said.

In later years, something in her stirred, much like a spiritual awakening, and she decided to immerse herself in the history and culture of Africa. As an adult, she did some research and learned that her ancestors were from today’s Nigeria and Sierra Leone.

“Likely, my ancestors passed through Richmond’s markets on the way to enslavement in North Carolina,” Bell said.

On a visit to Senegal, Bell saw people living in family compounds and realized that their buildings were organized like those on her grandparents’ North Carolina farm. She connected the dots instantly, recognizing a link to her family’s African roots right in front of her. “That was very grounding for me,” Bell said.

She formed the Elegba Folklore Society as a gathering place and center for African cultural experiences that honor “the richness of Mother Africa’s gifts to us,” Bell said.

To the Yoruba people of West Africa, Elegba is a deity, an intercessor who opens pathways. It’s a word that means “to bring clarity out of confusion” — an especially relevant theme during this time of racial sensitivity, Bell said. “Elegba Folklore Society promotes an understanding of the present by valuing the past.”

Why did she create the society? “Many untold stories, unlearned history, and cultural identities need celebration,” Bell explained. “Our [African] identity was systemically washed away, suppressed, repressed and ignored.

“This [society] gives me a sense of my humanity. Our mission speaks to re-instilling cultural foundations in the African American community.”

In 2019, the Valentine Museum and the Community Foundation chose Bell as a Richmond History Maker in their annual tribute to local “trailblazers” who make lasting community contributions.

“Janine Bell, the founder of Elegba Folklore Society, was honored as a Richmond History Maker based on her powerful and ongoing work as the leader of the organization,” said Bill Martin, the Valentine Museum director.

“Janine Bell and the Elegba Folklore Society play a vital role in the Richmond community and have, in many ways, laid the groundwork for so much of the rich cultural development we see across the city today.”

Katherine O’Donnell, executive vice president at Richmond Region Tourism, also lauds her work: “The Elegba Folklore Society has been a great cultural asset and partner to our destination for many years.”

To colleague Enjoli Moon, founder and creator of the Afrikana Film Festival, Bell “has a way of presenting and grounding that is engaging. It is a lived experience for her, and she brings authenticity to it,” Enjoli said. “Black life is a part of our reality.”

Art from across Africa

The Broad Street cultural center is full of African art, books about Africa, and textiles and clothing made in Africa, including wearable art such as mud cloth — a centuries-old, textile art that originated in Mali and is hand-dyed with mud.

The center also has kuba cloth: woven, palm leaf fiber enhanced by stitchery, a traditional fabric of the Kuba people of what is now the Democratic Republic of the Congo.

There are batiks from Burkina Faso and designer fashions from Cotonou, Bénin. There are wooden carvings from Mali, the Congo, Nigeria and Ghana, and bronzes and metal art from Mali, Senegal and Ghana.

Dionna Plush, who started as a volunteer and now works in the center, considers it “a calming place.” One day a woman came in and said, “I am just trying to find myself. Here I can be myself,” Plush said.

The Elegba Folklore Society’s center is also a performance space. The society has programs such as African drum workshops, dance performances, films, discussions and workshops.

The vocal, instrumental and dance performances usually tell a story because story and song are part of the African diaspora experience, Bell explained.

For guests, it’s not a passive theater-type experience. “We want it to be a feeling experience,” she stressed. “We want to touch them in their center and have them leave us differently. We want people to be transformed.”

While helping African-Americans revive or connect to their cultural heritage, Bell believes she can build bridges to the broader community — a particularly compelling goal in light of the summer protests surrounding the removal of Richmond’s Confederate statues.

In non-pandemic times, the society leads walking tours in Richmond organized around themes. One called “In the Beginning” follows the trail of enslaved Africans. (Richmond was the country’s second largest slave trade center after New Orleans in the mid-1800s.)

The tour titled “Our Souls Live Here” focuses on the post-Civil War era and early 20th-century African Americans — little-known movers and shakers like Charles Russell, who designed the building housing the Independent Order of St. Luke, a national African American fraternal organization reinvigorated at the turn of the 20th century by pioneering businesswoman Maggie Walker.

In 1996, the Elegba Folklore Society started celebrating Juneteenth, now their flagship event, staged annually (except for this past June, when the coronavirus made it too risky). It consists of three days of festivities, symposia and other activities to celebrate June 19th — also known as Freedom Day or Emancipation Day because it marks the official end of slavery in Texas.

On June 19, 1865, federal troops arrived in Galveston, Texas, to take control of the state and free its still enslaved people. The Civil War had ended two months earlier, but slavery had continued in Texas.

The society’s winter celebration of Kwanzaa typically has performances, workshops, children’s activities and an African Market selling art and food. This year the weeklong virtual 2020 Capital City Kwanzaa Festival will stream on its website and Facebook page starting at 7 p.m. every evening. After a candle-lighting ceremony, the society will offer performances, talks, stories, showcases of Afrocentric fashion, workshops and more.

Within COVID-19 guidelines, Bell organized several “mini-family reunions” in neighborhoods featuring performances and conversations to reconnect people with their heritage and culture. The October program, titled “Opening the Roads to Our Future,” was meant to instill “self-pride, self-worth and empowerment,” she said.

The society’s work is especially critical now, Bell said, when “cries for social justice” are surfacing all over the country.

To learn more about the virtual Kwanzaa Festival or the Folklore society, visit efsinc.org or call (804) 644-3900.