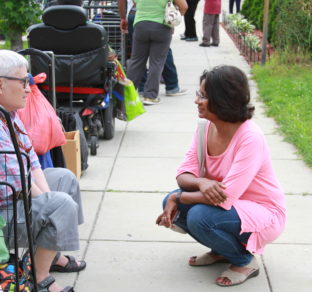 Radha Muthiah, CEO and president of the Capital Area Food Bank, said its 450 food pantry partners have seen a surge in the number of people experiencing hunger in the area since the pandemic struck in March. The nonprofit and its partners throughout the metro area provide 30 million meals each year to local residents. Photo by Capital Area Food Bank
PRINT

Longtime volunteers for the Capital Area Food Bank were accustomed to working long hours packing boxes with fresh fruit and vegetables in a Northeast D.C. warehouse. What kept them coming back was the camaraderie and satisfaction of helping others.

But in March, when the pandemic hit, some volunteers suddenly found themselves in need of food themselves.

“I’m so sorry to have to call you to ask for food,” some callers to the Capital Area Food Bank’s Hunger Lifeline said, according to its president and CEO, Radha Muthiah, in an NPR interview in May. “I’ve never had to do this before. In fact, I volunteered at your facility.”

Before the pandemic, the Capital Area Food Bank, the area’s largest, counted 400,000 people in the D.C. metro area who were “food insecure” — meaning they cannot count on their next meal. “It’s clear that number will increase, and increase fairly significantly in our area,” Muthiah told the Beacon.

The Capital Area Food Bank distributes 30 million meals to its 450 food pantry partners in the DMV each year. When it’s hit hard by external circumstances like the pandemic, so too are its partners and the people who rely on them.

The Capital Area Food Bank’s largest partner in Northern Virginia, Food for Others, based in Fairfax, Virginia, “experienced the perfect storm” this past spring, according to its executive director, Annie Turner.

Residents’ needs increased by 400% almost overnight, she said. At the same time, the group lost volunteers. Food for Others relies on volunteers for 67% of its workforce, and many of them are retirees, who must be cautious about the coronavirus.

“The clients increased, manpower decreased, and the food was scarce,” Turner said. “We take pride in never turning anyone away for lack of food. We really had to think quickly to be able to serve the increased demand.”

To help address the issue better, Food for Others, the Capital Area Food Bank and about 60 other leaders of in Maryland, D.C. and Virginia held weekly meetings to discuss how to adapt to the new reality.

“The food access community has really come together to make sure that we cover the gaps that exist, and that’s a real success from the last four months,” Turner said.

In years past, for instance, the Capital Area Food Bank typically gathered about 60% of food from grocery store donations, 20% through government funding, and the remaining 20% from its own fundraising.

Starting in March, though, grocery stores were sold out due to panic buying and had nothing to donate. Now the food bank must purchase more than 60% of its food — at a cost of about $2 million a month.

“It looks like a very different organization,” Muthiah said. “March, April and May were tough. I’m just proud that we managed to get out a good amount of food out. [Then] we started to get a sense of what this new normal was going to look like,” she said.

“We’ve significantly altered our operations, and we’re constantly thinking about alternate scenarios should there be another surge.”

Hunger increasingly affects the older population. The rate of hunger among people age 60 and older has increased by 40% over the past two decades, according to the national nonprofit Feeding America.

Older adults who struggle with hunger are also more likely to have chronic health conditions, such as asthma, depression and high blood pressure, its study found.

Even before the pandemic, about 5.5 million older Americans didn’t always know where their next meal would come from, according to the national organization Meals on Wheels.

One major barrier to getting food is transportation, which many older adults lack. Without a car, you can’t easily shop at grocery stores or pick up free food at food pantry distribution sites. In addition, older adults are more likely to be homebound, especially during the pandemic.

To help, this spring the Capital Area Food Bank started to deliver food via Lyft, Uber and taxicabs.

“We’ve utilized different forms of transportation, whether through rideshares or taxis, to get food to seniors,” Muthiah said. “Many of them are hesitant to come out of their homes to make too many trips just so they can minimize their [virus] exposure.”

The organization has also started dispatching a truck stocked with fresh food to residents of Ward 8, “one of the larger food deserts in our area,” Muthiah said. (A food desert is a neighborhood without supermarkets or access to healthy food.) The mobile grocery store, called Curbside Groceries, started its runs in July.

“We have had lots of great feedback about the home deliveries. Manna participants are very grateful,” said Cheryl Kollin, Manna’s Community Food Rescue program director, in an email.

How to safely volunteer

Because older adults are more likely to continue to volunteer at food pantries if they can do so safely, Food for Others checks workers’ temperatures and requires gloves and masks at its warehouse.

It has also started a “Grow a Row” program, asking home gardeners to plant an extra row of food to donate. After all, a safe way to help feed others is to grow food, either in your yard or at a farm. [See “Gardeners: help yourself and others, too,” in the July Beacon.]

Every afternoon, a driver from Food for Others picks up the day’s harvest and delivers the products “in time for dinner,” said the farm’s executive director, Samantha Kuhn.

“We’re seeing a lot more community volunteers — kids of all ages, even grandparents of all ages,” said Kuhn of JK Community Farm, established by JK Moving Services in 2018. “We have 150 acres, so we can keep everyone spread out.”

Many of them are older volunteers, she said. “They really know what it takes to run a farm. They’ve seen it before, and they’re happy to work hard and work outside.”

Small, grassroots food pantries in Maryland have also seen a surge in demand — and in volunteers.

“The numbers have shot up. The need is increasing,” said Roxanne Yamashita, CEO of Small Things Matter in Silver Spring, Maryland, a nonprofit founded two years ago by her sixth-grade daughter, Lana Anderson. But “I have to turn volunteers away because we have so many,” she said.

Several times a month, dozens of Small Things Matter volunteers ranging from age 10 to 70 gather outdoors in the summer heat to sort and distribute food to 1,000 people, thanks to Wegman’s donations and a USDA grant.

Because one of the biggest barriers to getting food is transportation, Yamashita said, Small Things Matter recently started delivering boxes of fresh produce directly to large apartment buildings. Volunteer residents then hand-deliver the boxes to their homebound neighbors, she said.

“People are taking care of one another and taking care of their neighbors. That whole feeling of community makes people feel less scared and more secure, which is really good for your health mentally,” Yamashita said.

To get help or volunteer

In Montgomery County, Maryland, call Manna at (301) 424-1130 to get food delivered to your home or to pick it up from a distribution site.