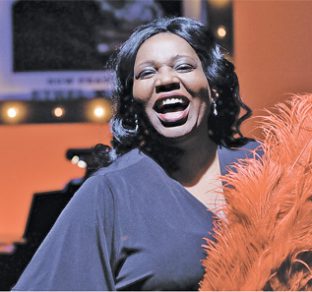 She’s really a force of nature — a charismatic singer with a richly powerful and expressive voice. She’s Bernardine Mitchell, a Helen Hayes Award winner who has generated quite a following for herself through a series of outstanding performances at area theater companies in recent years.

Now she’s back at MetroStage in Alexandria, Va., starring in a musical biography of Ethel Waters, the great gospel, jazz and blues singer of the 1920s through the 1950s.

The show takes its name from one of Waters’ biggest hits, the spiritual His Eye is on the Sparrow. And while it provides only a cursory exploration of Waters’ life, Mitchell gets deep into the music that created the legend.

In recent years, MetroStage has created a home for shows about 20th century African American singers. It’s a shrewd move in a competitive theater environment: The shows can be mounted inexpensively, and successfully marketed to both targeted and general audiences.

And when there’s a powerhouse performer such as Mitchell featured, ticket sales are healthy. Mitchell is no stranger to MetroStage audiences, having starred in such shows there as Three Sistahs and Mahalia, the story of Mahalia Jackson.

The latter show, which earned Mitchell one of her Helen Hayes Awards for Outstanding Lead Actress (the other was for her work in Arena Stage’s Blues in the Night), was brought back for a second smash run last year.

So how does this show compare? Well, Mitchell is superb, holding the stage accompanied only by William Knowles on piano/keyboard. But His Eye is on the Sparrow falls short of Mahalia’s depth.

That’s unfortunate, as Waters’ life was quite dramatic. She was born as the result of a rape in 1896, lived a childhood of grinding poverty, was wed and divorced by age 14, and suffered from the effects of severe racism.

But Waters nevertheless built an international career as a headliner in concerts, starred on Broadway, had hit records, was nominated for an Academy Award, and toured with evangelist Billy Graham. Maybe there was just too much life for writer Larry Parr to cram into one show along with 17 musical numbers.

Mitchell does her best with the exposition-filled breaks between songs, filling us in on Waters’ drive to break free of the unrelenting misery into which she was born. But it is really a connect-the-dots exercise, with substantial leaps in time and emotional growth that do little to explore the woman’s inner being.

As a result, we don’t really get to know Ethel Waters except through the music. Generally, what emotion there is to be found here is in the soundtrack, not the story.

That’s helped by the fact that Mitchell is a more robust singer than Waters was herself. Mitchell may even be a more dynamic, energetic performer.

That’s especially evident in her a capella rendition of 1934’s “Little Black Boy,” focusing on a lynching. Mitchell’s voice, alternately trembling and resonant, is richly evocative here, encapsulating the pain of a lifetime into one song.

In “Taking a Chance on Love,” Mitchell lets us see the joyful woman Waters might have been without all the early pain. Mitchell is equally effective with other Waters hits, such as the title song as well as “Sweet Georgia Brown,” “Dinah,” “Am I Blue,” “Cabin in the Sky,” and “Frankie and Johnny.”

Waters had material from some of the great tunesmiths of the 20th century, and they’re represented here with Harold Arlen’s “Stormy Weather,” Irving Berlin’s “Suppertime,” and “Old Man Harlem” from Hoagy Carmichael.

The most piquant biographical moments seem to be when Waters expresses her distaste for white people. That’s all white people, not just the overt racists who tormented her. Such feelings seem justified at first, but later appear pathological.

It is a subject that Waters, as shown here, eventually has to confront. Mitchell guides us through that journey with sensitivity, and the twists that occur pay the only substantial dramatic returns to be found with the spoken word here.

A life in review

Director Gary Yates moves Mitchell around the simple set, trying to generate energy despite the many flat biographical monologues.

Complicating his challenge is the way the writer, Parr, has built the story. It is told by Waters as she looks back on her life, rather than as she is moving through it.

Waters was known to be a far more forceful (some would say combative) person through much of her life than we see here. Her personality probably enabled her to overcome the dire circumstances she faced and the racism she endured.

But she had mellowed considerably towards the end of her life, so the direction of the narrative dulls the scope of her dramatic life and the force of her personality.

So there’s not really much Yates can do with Parr’s script, other than to get Mitchell through the words and back into the songs as efficiently as possible. And that’s what he has done.

And with Bernardine Mitchell, getting into the songs is really all one needs to be thoroughly entertained.

His Eye is on the Sparrow continues through March 20 at MetroStage, 1201 N. Royal Street in Alexandria, Va. Free parking is available.