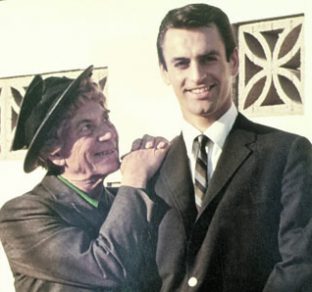 When he was 5 years old, Bill Marx quit taking piano lessons. He was tired of playing nothing but scales.

When he was 6, he started again. This time he didn’t quit. But his teacher did. That was OK with Marx’s parents. They knew he had more talent than his teacher.

He went on to prove them right, becoming not only an extraordinary pianist, but a brilliant composer, arranger and conductor.

Where did the musical gifts come from?

Perhaps from his father, the famed Harpo Marx, who strummed melodies on the harp and who, with his lovely wife Susan, adopted Bill when he was 1 year old.

“Dad never learned how to read music,” said Marx, “so he learned those complicated harp pieces by ear. Most likely my musical abilities were inherited from my birth parents. Each of them, I later discovered, had musical talent.”

When he was 8 months old, his birth parents placed him in the Children’s Home Society, an adoption agency in Los Angeles. Four months later Susan and Harpo showed up, and it was love at first sight.

From that day forward Susan and Harpo made their adopted son and the other three children they adopted — Alex, Jimmy and Minnie — feel extra special.

“Dad said he wanted to have as many kids as he had windows in our Beverly Hills house,” said Marx, “so he could see them waving at him when he got home from work.”

Working with his famous dad

When he was 12, Marx became Harpo’s personal prop man.

“I was in vaudeville!” said Marx. “Besides props, I was in charge of Dad’s harp, and in charge of timing each sketch.”

When he was 16, he became his dad’s musical conductor and arranger.

The following year, he was in New York City writing a four-minute piece of music for the harp to be submitted for enrollment as a composition major at the Juilliard School of Music.

His composition experience didn’t meet their standards, but one of the judges, Professor Giannini, came to the rescue. He went to the piano, took his left arm from his wrist up to his elbow and placed it indiscriminately on the keyboard. He asked Marx to name the notes that were sounding from bottom to top. Marx named them all correctly and three days later he was enrolled at Juilliard.

“I wasn’t born with perfect pitch,” said Marx, “but my acute relative pitch, the gift that gives me the ability to tell any note played, catapulted me into the next part of my life — becoming a serious composer at the age of 18.”

Scores for TV and movies

Numerous concertos followed, including an innovative double harp concerto. He scored for motion pictures, television, theater and ballet. He also recorded many albums, two with his father, and for years played concerts as a jazz pianist.

Marx lives in Rancho Mirage with his third wife, Barbara, who, in a bizarre turn of events, was recommended to Marx by his second wife when they were divorcing. “Only in California!” said Barbara.

Marx has donated to the Academy of Motion Picture Arts and Sciences Harpo’s artifacts — his prop trunk, his wig, his oversized coat. His sister Minnie has Harpo’s horn. The Smithsonian archives have Harpo’s papers and letters.

Several precious pieces, such as the painting that has Harpo’s smiling face on the body of Gainsborough’s famous Blue Boy, are on display in Marx’s home.

If you’d like to meet Marx in person, drop by Sabatino’s Restaurant in Rancho Mirage some Friday or Saturday night. He’ll be doing what he likes doing best: Schmoozing with the patrons while tickling the ivories.