Having peak experiences in Indonesia 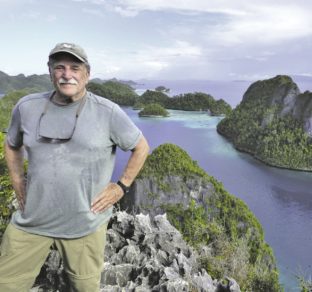 The whale shark swam directly at me. As I feared becoming whale shark canapé, it veered slightly and slid past me, just a couple of feet away. If I had been so inclined (or stupid), I could have touched the 25-foot-long shark as it glided by.

I’ve had some pretty amazing animal encounters in my life — lions in Namibia, mountain gorillas in Uganda, whales in Alaska and Antarctica, polar bears in Siberia — but this snorkeling sighting ranked near the top. Of course, knowing that whale sharks only eat plankton, not overweight Americans, helped.

My shark encounter came about halfway through a recent two-week trip on Heritage Expeditions’ “Indonesian Explorer” adventure cruise through some of the most beautiful tropical scenery in the world.

We saw plenty of wildlife in Raja Ampat, more than 1,500 steep, jungle-covered islands at the eastern edge of Indonesia. It’s one of the most biologically diverse regions on the planet.

It was an active trip. At least two or three times each day we either hiked, snorkeled, swam off pristine white sand beaches, visited local villages or cruised around in a Zodiac (an inflatable boat used for shore excursions and close-up views of the islands).

Views worth climbing for

Aside from the whale sharks, what most appealed to me during the trip was the lush scenery. To get to the best view of my trip, I had to climb an almost-vertical trail over sharp volcanic rocks, pulling myself up via roots, strong branches and thin tree trunks — plus a rope for the last 10 yards or so. I was drenched in sweat by the time I reached the top, but the view was worthy of a poster or brochure.

The climb back down was hairy, requiring serious concentration to return safely to the trailhead. After that climb and descent, though, I felt proud that I still had some adventure left in my aging body.

Our two birdwatching outings involved getting up very early, stumbling through the forest in the dark and sitting quietly for an hour or more. But the rewards for enduring the early hours and being patient (not one of my strong points) were great, especially for serious birders.

Who wouldn’t be thrilled watching a Bird of Paradise showing off its brilliant, colorful plumage? The serious birders were able to see several of them, plus many other species, adding to their already impressive life lists.

We also visited a number of indigenous villages along the way. Each visit involved a warm greeting, a welcome ritual, dancing and singing, speeches by village dignitaries, and an exchange of gifts.

We were also given an opportunity to make fools of ourselves by joining in the dancing while smiling children held our hands and led us through the movements. Then we’d wander the village, buying tchotchkes and sampling coconut, fried fish and other, often unidentifiable, treats.

Perhaps these greetings were just an attempt to separate tourists from their dollars. But I looked closely at the faces of the villagers as they danced, sang and interacted with us and did not detect even a hint of insincerity.

Yes, of course they want tourist dollars. But the opportunity to show us who they are was at least as important as the few bucks we spent on wall hangings, masks and penis gourds.

I expected lush scenery, snorkeling, birds and villages in Indonesia. What I didn’t expect was to be touched by the human tragedy, past and present, of this tropical paradise.

It started with a visit to the Japanese Caves on Biak Island. During World War II, the Japanese used the underground chambers to hide from U.S. soldiers, who were trying to take back the island in the final months of the Pacific war. The Japanese soldiers would pop out of the caves to attack the U.S. troops, then slip back into hiding.

The Japanese army had forced out the local people, executing those who resisted. The locals tipped off the U.S. military, who then bombed the caves, dumping gasoline on them to kill anyone who survived the bombing. It’s a grisly story: 3,000 Japanese soldiers were killed in the attacks.

Current events in Indonesia belie its beauty, too. The Papuans on the easternmost island of Indonesia, an island shared by Papua New Guinea, have a separate culture, ethnic origin, religion and language.

They feel discriminated against by the Indonesians, and don’t have access to the same economic opportunities. Many would prefer to be politically independent, separate from Indonesia. Their discontent has turned violent in often deadly public demonstrations.

We saw the consequences of this conflict on one of our shore excursions to visit a freshwater, inland lake. Civil unrest had broken out a couple of weeks earlier, and we observed broken windows and burned-down buildings on the way to the lake.

We also heard stories of demonstrators shot by Indonesian police and military. A large hospital ship was docked in the harbor to treat the wounded. In an indication of just how serious the situation was, we were not allowed to take photos of the ship.

I got a first-hand account of the problems that day. After the welcoming ceremony, I strolled through the village, where I met Jacob (not his real name). He talked openly but quietly about the conflict, his aspirations, and his role in the efforts to help achieve self-determination for his people.

Despite the local tensions, though, we never felt threatened or in any danger. Everyone was friendly and relaxed in our presence. The manifestations of the conflict seemed distant to us.

Due to health and safety concerns from the coronavirus, many countries have imposed travel bans. Quarantining measures may be necessary. Consult cdc.gov. for more information.