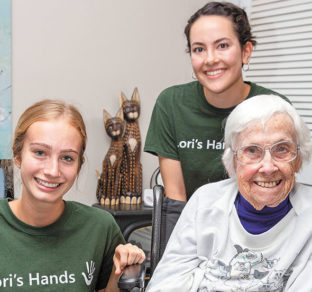 Smiles can bridge the generation gap. Through a nonprofit, college students volunteer to help people with chronic illnesses, often older adults. Lori’s Hands, which started on a campus in Delaware more than a decade ago, has expanded to Baltimore. Photo courtesy of Loris Hands
PRINT 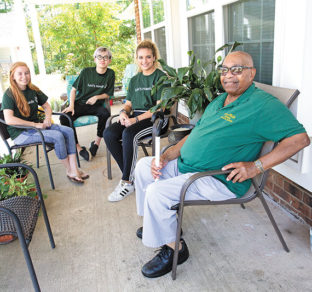 LaFave’s mother, Lori, had passed away from breast cancer while LaFave was in high school, and the nursing major wanted to make a difference within her community at the University of Delaware.

From personal experience “I had seen how chronic illness could impact a family’s day-to-day life,” she said.

The group’s college-age volunteers helped those with chronic illnesses by shopping for groceries, helping fill out forms, folding laundry, sweeping the floors, mowing the lawn and more.

“Baltimore has faced a lot of social justice and public health issues, and it feels like a privilege to be addressing some of those [through Lori’s Hands],” LaFave said.

In July, Community Care Corps, a national cooperative that supports organizations that provide non-medical assistance to seniors, people with disabilities and caregivers, awarded $23 million in grants to 183 organizations. Lori’s Hands’ Baltimore program was one of two recipients based in Maryland.

From student club to nonprofit

The idea for Lori’s Hands struck LaFave one day during her sophomore year, as Bonomo described it. “She was walking down the green [on campus], and it just sort of suddenly occurred to her that college students have these odd schedules with pockets of time they could be using the help the community,” Bonomo recalled.

Although Bonomo was studying foreign languages and literature, she decided to join her roommate’s venture. Together, they created a student volunteer club and ran it for the rest of their undergraduate years.

After they graduated from University of Delaware, the two, along with some other friends, developed a service-learning course for the university that included classwork in healthcare as well as hands-on volunteer experience. In 2012, LaFave taught the course.

Also that year, LaFave and Bonomo decided to incorporate Lori’s Hands as a nonprofit, which enabled them to apply for grants and have a more consistent volunteer base and cash flow.

By 2017, they wanted to professionalize the organization, and hired a full-time director, Maggie Ratnayake. “I was stepping into an already well-oiled machine,” Ratnayake said.

So, she focused on expanding the nonprofit. In three years, she has helped double Lori’s Hands’ client and volunteer bases.

“What we would love to see is that this expansion of Lori’s Hands into Baltimore is just the start,” she said. “As aging in place is expensive, we know that there is a need in the community for our services.”

To help those with chronic illnesses, volunteers do odd jobs and run errands for at least two hours each week. Most importantly, though, they talk with the clients, which they have been able to continue doing even during the pandemic.

For the past five years, volunteers have helped Thomas Henry of Delaware maintain his home by doing chores like scrubbing the floors. His favorite aspect of Lori’s Hands, however, is companionship, and he often shares life lessons with the volunteers.

“They’re starting out on a new adventure, and life has many twists and turns. We have to be ready for whatever comes; we have to train ourselves,” Henry said. “I’m still training myself now, and I’m 87 years old.”

Henry has been able to maintain his connection with Lori’s Hands volunteers despite the pandemic. One calls him every week. “I look forward to it,” Henry said.

Rachel Titus, a rising senior at the University of Delaware studying health behavior science, has managed to stay in contact with her Lori’s Hands client, although she has been living with her parents in Pennsylvania since March.

At least once a week, Titus and her volunteer partner call a Newark resident they have been helping for the past two years. She has Amyotrophic Lateral Sclerosis (ALS).

“Before COVID happened, we would typically help her with laundry, cleaning around the house…simple things that I wouldn’t need help with that someone else needed,” Titus said.

Titus and fellow volunteers are also organizing a Zoom trivia night, and do occasional drive-bys to visit clients, especially those who reside in assisted living facilities.

“In healthcare, it’s just as important to have the human connection as it is to have the knowledge to actually perform healthcare duties,” Titus said.

Work can lead to careers

Many volunteers acquire this healthcare knowledge from the Lori’s Hands class at the University of Delaware. One student, Corey Perkins, began volunteering a few hours a week for a man with a heart condition. After talking with him, “I was able to learn more about chronic illnesses and how they affect people differently,” she said.

Due to these conversations, Perkins, now a graduate student at the University of Florida, has begun studying racial health disparities.

Another former volunteer, Amy Sherlock, also credits Lori’s Hands for solidifying her career path as an occupational therapist. “This is a perfect opportunity to gain some experience [in the healthcare field] and hopefully help people along the way,” she said.

Sherlock’s time with Lori’s Hands was especially impactful to her as an out-of-state student. One client who she worked with for more than a year “was like a grandmother away from home,” said Sherlock, who is from New York.

Even though Sherlock graduated from the University of Delaware last year and is currently in a doctoral program for occupational therapy, she still periodically calls the client, just to catch up.

In this sense, “We think our students get as much out of [their experience with Lori’s Hands] as our clients,” LaFave said. “It’s a two-way model.”

Lori’s Hands will bring a similar model to its new chapter in Baltimore. The main differences are that the program won’t be focused on one university, and it will employ graduate, instead of undergraduate, students to create a more consistent volunteer system for the clients, according to LaFave.

Lori’s Hands now must adapt not only to a new city but also to a novel coronavirus. “It’s not what we had envisioned when we had first applied for the funding,” LaFave said. “We’re just going to have to be really creative.”

Lori’s Hands has already developed a contactless model in Delaware that it will transfer to Baltimore. It includes virtual visits and events, assistance with assessing online resources and a pen pal program.

In fact, this no-contact model is “more attractive to students than usual,” according to LaFave, as many studying healthcare still need service opportunities that might otherwise be canceled due to the pandemic.

When the local chapter launches in September, Lori’s Hands will be seeking clients with chronic illnesses who will benefit from help from the younger generation.

For more information about the organization and its services, or to seek help, visit lorishands.org or call (302) 440-5454.