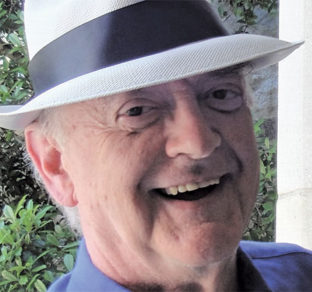 Cecil Sears, an economist by profession, discovered a passion for dance in general — and the tango in particular — by chance when he was 66. He has since participated in the International Tango Festival in Florence, Italy, and continues to study other forms of dance. Photo by Diane York
PRINT 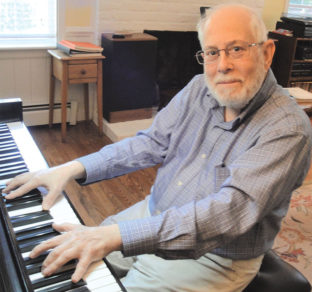 Alan Pollack studied music in his youth and planned to pursue a career in it. As it happened, he became a software engineer, but wrote a well-regarded blog on the side about the Beatles. Now retired, Pollack plays piano and teaches a music course ranging from Bach to the Beatles at the Osher Institute at the University of Richmond. Photo by Diane York
By: Diane York Posted on: August 05, 2019

Think back to your school or college days, when you may have enjoyed playing a musical instrument, acting in plays, or simply were engrossed in a subject that particularly enticed you. It may even have been your major in college.

If that love, or that major, didn’t translate into a paying job or career, you might have let it go for years or even decades. But if that interest lingers, you might find time for it once again in retirement.

Taking classes or even teaching courses in the subjects you love can enrich your life, leading to a feeling of fulfillment and the realization that you have finally become the person you were meant to be.

It takes one to tango

For Richmonder Cecil Sears, who spent his life as an economist, that meant learning how to dance. It started with a chance visit to the Virginia Museum, where he was invited to try the tango.

That one lesson ignited a passion that led him, at age 66, to travel alone to Buenos Aires, where he took tango lessons for three weeks. By 2017, Sears was proficient enough to participate in the International Tango Festival in Florence, Italy.

The last night of that festival ended at 3 a.m. But he and the dance partner he met there, Francesca, made their way to the Ponte Vecchio Bridge. With the bridge to themselves, they danced the tango together in the moonlight, a memory he says he will always treasure.

At 69, Sears continues to expand his dance repertoire with ballet, swing and waltz.

All in all, this late-in-life journey began with the simple decision to say “yes” to what Sears calls the “wonderful buffet of life.”

Back to the keyboard

Alan Pollack’s passion for music began with piano lessons at age eight. He continued his studies and eventually earned a master’s degree and doctorate in music theory and composition, assuming his life career would be in that field.

After graduation, he taught music at Yale University for two years. As that job ended, however, he found himself in need of income. A friend helped him get a job in software engineering, and that’s what he did for the next 35 years.

“I was angry with myself because I had had such big dreams” of a music career and let it all go. “So I dropped all contact with music,” Pollack said.

Then, “when I hit [the age of] 41, I had a real mid-life crisis and realized I needed music back in my life.”

While Pollack continued with his technology job and raising his family, he started analyzing the Beatles’ music and began publishing a blog.

This turned into an 11-year project in which he analyzed every song the Beatles had written. His work became well known and is frequently quoted by music scholars.

All of this was gratifying, but still he ached to perform music and to be fully engaged in it once again.

After retiring in 2013, he connected with the Osher Lifelong Learning Institute, a nonprofit educational program for older adults with programs around the country. This area’s Osher Institute presents a variety of classes each semester at the University of Richmond, but it offered Pollack something even more important.

“I joined Osher initially to meet people and attend classes, but soon realized I could teach there,” too, he said. In the course he teaches, Pollack performs and discusses music from the Baroque period through Classical to Ragtime to Rock. That ranges from Bach, Beethoven and Mozart, to Joplin, Gershwin, Bob Dylan and, of course, the Beatles.

Beyond anything he could have expected, the Osher Institute has fulfilled his dream of performing and teaching the subject he loves.

“It’s pretty amazing,” Pollack said. “Without getting too psychological, I finally feel at age 70 that I have achieved the self-actualization that Maslow talked about.”

Want to learn about a topic as significant and complex as nuclear power? At the time of his retirement, George Pangburn was a senior executive responsible for all of the U.S. Nuclear Regulatory Commission’s programs involving the use of nuclear materials in the United States.

For his work, he received the NRC Meritorious Service Award in 1996 and the Presidential Meritorious Rank Award from President Bush in 2004.

But Pangburn’s hidden love was maps and geography. The Osher Institute at the University of Richmond gave him the perfect opportunity to explore and teach those topics.

Some of the classes he has taught include: Current Issues in Nuclear Power, Building the Atomic Bomb, Why Geography Matters, and American Foreign Policy.

One of the most exciting projects that has come out of his Osher experience is a partnership with Dr. Susan Schulten of the University of Denver. The two have paired up to teach a class on maps and American history this fall. The class will be based in part on Schulten’s bestselling book, A History of America in 100 Maps.

Pangburn says he gets satisfaction from delving into the subjects he finds fascinating and sharing that information with like-minded others. “I love the feeling that I am giving back to others.”

Ballet, a challenging dance form and a demanding physical activity, requires stamina and grace. Kelley Lane, a real estate property owner and manager born in 1946, first had exposure to the world of dance and ballet through his first wife’s interests.

As his appreciation grew, he began studying modern dance technique with Starr Foster Dance in Richmond.

Lane admitted the classes were tough at first. “I had to struggle to focus and remember the moves, but it was so enjoyable. My body said, ‘Yes, this is it!’”

After that, he decided to try ballet, the pinnacle of the dance world. His first foray into ballet was with Richmond Parks and Recreation, where he was surrounded by teenagers who helped make it fun.

Then he went on to the Richmond Ballet, which offers classes for adults. (“There are no tutus in my ballet class,” Lane pointed out. “Men wear T-shirts, tights and ballet shoes.”)

When Lane turned 65, his opportunities to explore dance exploded. He realized he could take free professional-level modern dance and ballet classes through a program at VCU called the Commonwealth Society.

Since 2010, Lane has been enrolled continuously in ballet and other dance classes. He has now reached the intermediate level in ballet at VCU. He dances at numerous Richmond venues, including the Dance Space, and at live music venues all over town.

Did it take courage for him to take university classes with students 50 years younger? “Yes, it takes some courage,” he said. “But I loved it, so it did not stop me!”

Interested in going back to school to pursue a lost passion? Here are some local options:

If you have an income less than $15,000, you may take courses for credit. Otherwise you may audit the courses for no credit.

For more information, ask your educational facility or contact the State Council of Higher Education for Virginia at (804) 225-2600.

The Osher Lifelong Learning Institute: Located at the University of Richmond, Osher offers individuals 50 and up access to a broad range of learning activities.

You can take courses, often taught by prominent, talented people in their fields, attend seminars and lectures, and even audit some University of Richmond undergraduate courses. You may also be able to teach.

The Commonwealth Society, part of the VCU School of the Arts, is a program for adults of all ages. It features short courses, a lecture series, activities and travel opportunities.

Its objective is to connect learners with the resources of Virginia Commonwealth University. Membership is $100 per year. For more information, contact Angela Allen at (804) 827-7301.