Love, marriage in the time of pandemic 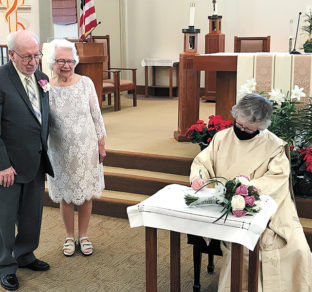 The coronavirus couldn’t stop octogenarians Helen Baker and Dan Kott from tying the knot in April at their retirement community, Oak Crest. The private event was “a moment of joy,” said Rev. Emily Holman, a fellow resident who performed the ceremony. Photo by Jeff Getek
PRINT

The bride wore sensible sandals and the white lace dress she had fortunately purchased in pre-pandemic times. Her left hand clutched a small bouquet of white and pink roses.

The groom wore a dark sports coat with a boutonniere to match her bouquet. Her hair was white; what remained of his was gray. The chapel pews were empty.

With their Baltimore County retirement community under lockdown, Helen Baker, 84, and Dan Kott, 82, walked down the hall to the chapel to be married. Only three others were allowed at the April 24 ceremony: an officiant, a photographer and a Scripture reader. As soon as all five were in the chapel, the doors were locked behind them.

“It was kind of like we were sneaking around,” Kott said.

It wasn’t the wedding they had planned. But their happiness brightened the pandemic gloom for residents at Oak Crest, a sprawling 87-acre retirement community in Parkville operated by Erickson Living.

“That marriage was a moment of joy in this time,” said Rev. Emily Holman, an Episcopal deacon and fellow resident of Oak Crest who performed the ceremony. “Everyone was so happy about it.”

Kott, a Baltimore native and retired computer programmer analyst, moved to Oak Crest in 2013 with his first wife, who had dementia. Home to about 1,800 residents in independent-living apartments and another 300 in continuing care units, Oak Crest was a good fit. Unfortunately, his wife passed away four months after the move; they had been married for 50 years.

Baker, twice-widowed and a retired Baltimore County schoolteacher, moved to Oak Crest early in 2018. “I liked it right from the beginning,” she said. “When I met Dan, I liked it even more.”

About nine months after she moved in — Nov. 10, 2018, to be exact — she was taking an evening walk and noticed a friend playing piano. Here’s the story, as they tell it:

Kott: “In one of the lobbies on Saturday nights, a lady would come up and play the piano and entertain. I would walk over and listen to the music. A lot of times folks would sing along.

“One evening I was sitting there, and Helen was stopping by. There was only one place to sit, and that was on the sofa next to me. And she did. And I’ll let her tell the rest of the story.”

Baker: “I had been in the habit of taking a walk after dinner. So, when I saw Natalie was playing, I thought I’d stop. There was no place else to sit.

“At the end, we started to talk, and then we started walking home…He asked me to dinner the next night. We kept on walking and talking and having dinner a lot.”

A year later, the couple was talking about marriage. They reserved Oak Crest’s chapel for a May 2 ceremony and the Garden Room across the hall for a reception.

In January, they bought rings. Baker went to Macy’s and found the lace dress. Their families would meet for the first time: Baker’s daughter and two sons from Connecticut, Philadelphia and Baltimore; Kott’s three daughters from Baltimore. Baker’s three granddaughters would do the readings, and her grandson would play “Amazing Grace” on his saxophone.

On Friday, March 13, state and county courts announced they would close, and the couple didn’t yet have a marriage license.

“We were really worrying that we wouldn’t be able to get out and get it,” Kott said. But they did, squeezing in just under the wire that day. By Monday, the courts were shuttered.

Then, on March 31, Oak Crest went under lockdown. Independent living residents were asked to stay in their apartments. Its dining rooms, snack bars, fitness center and hair salon closed. The pool and gyms closed. No tai chi classes or knitting groups, no mahjong games, no woodworking. The piano in the lobby fell silent. No visitors were allowed from outside the campus. Meals and snacks were delivered directly to apartments. Employees were screened for illness.

Those restrictions proved a bulwark against the virus; as of June 1, Oak Crest reported not one case among its independent residents, according to Oak Crest spokesman Jeff Getek.

But all that social distancing didn’t stand in the way of romance. “We used to sneak out in the evening and spend a couple of hours together,” Kott admitted.

The couple decided to move forward with their wedding on April 24. Oak Crest agreed to open the closed chapel for their nuptials.

Baker asked Holman, an ordained deacon who has lived at Oak Crest for three years, to officiate. Getek offered to take photos. An Oak Crest pastoral associate would read Scripture.

Masks were required. Empty pews. No family, no other friends, no live music, no reception. At least there would be flowers: white lilies and red begonias at the altar, left there for an Easter service that never happened.

Getek and his communications team ordered the couple’s bouquet and boutonniere. As a surprise, the Resident Life folks made a chocolate cake with buttercream frosting. A bottle of champagne appeared, too.

Deacons in the Episcopal Church may, but don’t often, officiate at weddings, and this was Holman’s first ceremony. The empty pews felt odd, so when she came to the part asking those assembled to “Speak now, or else forever hold your peace,” Holman gestured to the empty pews. Behind her, Getek chuckled.

After the ceremony, Baker and Kott couldn’t share the cake or champagne with anyone. But none of that diminished their union.

“We felt married,” said Baker, who plans to change her name when she can get out to file the paperwork.

The newlyweds are spending what might have been their honeymoon moving him into her apartment, one or two boxes at a time. Because of the lockdown, they can’t hire a mover or ask their friends to help.

But every box that comes down the hall is one more symbol of their bond.

“We don’t mind being quarantined together,” Baker said.