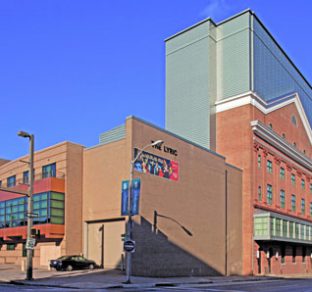 The Modell Performing Arts Center at the Lyric celebrates its 120th anniversary this year, with performances by Aretha Franklin, Cirque du Soleil and many others. The facility, which opened in 1894 and was remodeled repeatedly, is on the National Register of Historic Places. Photo courtesy of the Lyric Theatre
PRINT

On the evening of October 31, 1894, maestro Emil Paur led the Boston Symphony Orchestra in the prelude to “Die Meistersinger von Nurnberg.” It was the opening number of the gala concert celebrating Baltimore’s new “Music Hall.” The evening featured Nellie Melba’s rendition of Handel’s “Sweet Bird” aria.

On that night, no one could have predicted the many and varied sounds — not all musical! — that would ring through the building in the coming years.

Just 11 years later, for example, Boston boxer Mike Sullivan and Baltimore’s own Joe Gans fought to a draw there. And in 1905, the facility treated Baltimoreans to the first exhibition of cooking using electricity, aptly named the Food Show.

The building was renamed the Lyric Theatre in 1909, and throughout the past 120 years, it has hosted countless operas, musical theater productions, concerts, lectures and more.

The Lyric’s beautiful auditorium was placed on the National Register of Historic Places in 1986. In 2010-2011, the theater underwent an extensive backstage renovation and was renamed the Modell Performing Arts Center at the Lyric in honor of a large gift from Patricia and Arthur Modell (the former owner of the Baltimore Ravens).

Modernizing and enriching the landmark theater, the dramatic, innovative design reshaped the midtown skyline. The much-loved building continues to provide Baltimoreans with a world-class home for grand opera, full-scale musical and dance productions, and renowned performers.

In honor of its 120th anniversary, the Lyric will celebrate throughout the year with performances by legendary artists such as Aretha Franklin, Alvin Ailey Dance Theater, Cirque du Soleil and many more, in keeping with the theater’s history of diversity and variety.

Highlights of the Lyric’s anniversary season include:

The Emmy-nominated laugh-fest brings its finalists to perform live on stage.

Puccini’s tragedy of innocence betrayed is set to some of the most beautiful operatic music ever composed. The Baltimore Symphony Orchestra will be conducted by Steven White in a magnificent production designed by John Conklin and directed by James Harp.

An Evening with Aretha Franklin

Known the world over by her first name and as the reigning “Queen of Soul,” Aretha Franklin’s recording legacy is a testament to her musical genius.

A southern gothic supernatural musical, this is a haunting tale of fraternal love, lust, jealousy and revenge. Written by Stephen King with music and lyrics by John Mellencamp and musical direction by T Bone Burnett.

Adkins’ The Christmas Show Tour is a family-friendly theatrical production, featuring songs from his Celtic Christmas album, “The King’s Gift.” The show combines fireside story-telling with performances of classic carols.

Dubbed the “Last Leading Man” by the New York Times, Brian Stokes Mitchell has enjoyed a varied career on Broadway, television and film, along with appearances in the great American concert halls.

In 2008, a U.S. Congressional resolution designated the Alvin Ailey dance company as “a vital American cultural ambassador to the world” that celebrates the uniqueness of the African American cultural experience and the preservation and enrichment of the American modern dance heritage. The performance will feature a mix of old favorites, including “Revelations,” as well as new pieces.

The Modell Performing Arts Center at the Lyric is located at 140 W. Mount Royal Ave. For more information, visit www.modell-lyric.com or call (410) 900-1150.