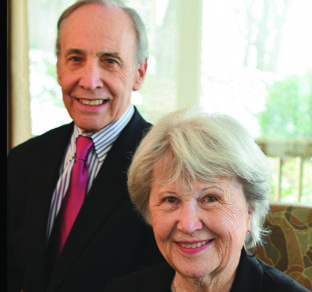 Sig Cohen and Carolyn Miller Parr have collaborated on a new book that incorporates what they’ve learned from two decades of mediating family disputes. The book, "Love’s Way: Living Peacefully with Your Family as Your Parents Age," focuses on such issues as inheritance, caregiving and aging in place. Photo courtesy of Carolyn Parr
PRINT

Older adults and their grown children confront a multitude of thorny issues when making decisions that affect the whole family — from how to divide up an estate among competitive siblings, to when it’s time to accept help at home, stop driving or move to assisted living.

Some of these matters fester and never get resolved, others drag on for years (perhaps even through the court system), while others can lead to a lifetime of resentment or split up families.

Carolyn Miller Parr and Sig Cohen say there’s a better solution. They have been helping families resolve conflicts for nearly 20 years through mediation — a process in which everyone sits down to hash out issues while a neutral third party guides the conversation.

“I saw how destructive trials and lawsuits could be, and I wanted to look for a better way for people to resolve their disputes,” said Parr, who spent 16 years as a judge with the D.C. Superior Court before retiring and taking up mediation.

Cohen had a career in the foreign service, with assignments in Bangladesh, India, Germany and the UK. After retiring, he did mediation at the D.C. Superior Court, helping train Parr.

Together they have written a book, published last month, called Love’s Way: Living Peacefully with Your Family as Your Parents Age. It’s a compilation of what they’ve learned over the years.

Both are now 81 and have personal experience with many of the disputes they have helped settle.

Parr’s parents lived with her when they were in their late 80s, and she cared for her husband, who died of dementia.

Cohen helped care for his mother long distance in Ohio, astounded that her driver’s license was renewed at age 94, despite failing eyesight.

Cohen lives on Capitol Hill in the District of Columbia with his wife, and Parr lives in Annapolis, Md. with her second husband, whom she married just a year and a half ago.

While they no longer have an office where they do joint mediations, they continue to mediate individually at neutral locations, and maintain a blog on their Tough Conversations website. (toughconversations.net)

Unlike a trial, lawsuit or arbitration proceeding, mediation is nonbinding. But even so, parties often stick with the solution they have hammered out together, Cohen said.

“We help them communicate with each other and reframe what they’re hearing. When someone says, ‘I’ll never trust him again because he’s such a liar,’ the mediator might say, ‘It sounds like you see things differently or you remember things differently.’ You pick up what they say, but say it back softer so they can save face and not get into a brawl,” Parr said.

“Often people come to new realizations about what the other person intended when they said something and did or didn’t do something,” she continued. “There’s so much you don’t know and assume about the other person. And when you assume bad motives, it just goes downhill from then on.”

The book is full of examples of how mediation can help. One older D.C. couple refused to move from their longtime home on a steep hill that was dangerous to navigate in winter. Their daughter, a geriatric care manager, tried everything to persuade them to move to a retirement community.

“We’re not moving!” the father barked. When asked why not, the real reason came to the surface. “We have too much stuff,” he replied.

After the daughter said she would just have to go through it all after they died, the parents finally agreed to let her help them sort through their things, and two weeks later the father announced they were moving.

Often old sibling rivalries bubble to the surface or explode when parents age, especially when one child is favored by either or both parents.

In the chapter “Siblings in War and Peace,” the authors talk about the “toxic triangle” that can come about when tensions rise with older parents and long-simmering resentments and jealousies between siblings come to the fore.

Another difficult sibling situation involves what Cohen and Parr term “the Swooper” — an adult child who lives out of town and swoops in occasionally, criticizing other siblings who are more involved with helping the parents day-to-day. Chaos often ensues.

In one case, the out-of-town child assumed that the spouse of one of her siblings was freeloading off the parent, when in fact he was spending his days buying groceries, getting medications and taking care of the house.

“The important thing is to listen, not get defensive. Try to hear what the individual is saying — not just the words, but their tonality,” Cohen said.

“What can we do to help them come to an agreement? One of the things is to ensure that the swooper is really informed. TMI (too much information) is a good thing in these cases. Tell them, ‘Mom went to the doctor, or medication was changed, or she caught a cold,’ so that they feel part of the game.

“Secondly, try to reframe what they say. What do you feel that you don’t know that we can help you better understand?” Cohen added.

One of the biggest points of contention revolves around inheritance. Should the parents bequeath a larger part of the estate to the sibling who makes the least money? Or will that lead to a lifetime of bitterness among the children?

In one case, a mother couldn’t decide how to divide her beach house in her will. Should all five get an equal share? But some said they didn’t have the money to cover their share of expenses for upkeep and taxes. Another child wanted to sell it, while another wanted to keep using it.

The mediation started by bringing everyone back to the family feelings associated with the place. “We sat down, and I asked what memories they had of that place as children,” Parr said.

“They went in thinking that the one who made the most noise would get to make the decision and that there wasn’t going to be a vote. But it ended up working out great because they were able to communicate and discuss their assumptions and fears,” Parr said.

In the end, the family decided to keep the house for five years, creating a trust for taxes and upkeep, and agreeing to renovate the house and re-examine how everyone felt later on.

“A court could never have come up with this [solution]. A judge never could have made that ruling,” Cohen said.

He added that when he and Parr were first discussing the book, they had tentatively subtitled it, Living Peacefully with your Family as you Age. But the publisher felt adult children would be more likely to buy the book, so the subhead now reflects that expectation.

However, they said older adults can also gain much from the book — from learning about the documents they need (e.g., wills and advanced directives), to steps they can take to prevent their kids from fighting over their possessions.

While anyone can call themselves a mediator, “you don’t just snap your fingers and become a mediator,” Cohen said.

Foremost in a mediator is “listening skills, but listening to understand and not to reply,” he said.

Cohen thinks the need for mediation will only grow.

“We have a larger and larger older population; we’re not only living longer but we’re also dying longer. As we age and as society ages, these issues are only going to multiply,” he said.

“It’s really important that people understand that mediation can really resolve issues. You can’t expect that you’re going to completely patch up the relationship between [bickering] children, but you can at least come up with a way of working out issues of taking care of Mom and Dad, work out the caregiving issues, the money issues, the beach house issues.”