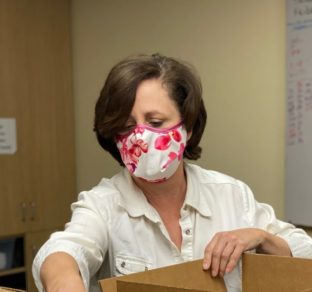 For the past seven years, Julia Murray has received several home-cooked meals delivered straight to her doorstep each week. Murray, 79, a retired nurse who suffers from arthritis and asthma, said that getting her food delivered at her home in Columbia, Maryland, by Meals on Wheels of Central Maryland “keeps me out of assisted living or a nursing home.”

The pandemic has made the organization change its deliveries from two meals a day — one hot, one frozen — to a once-a-week drop-off of 14 frozen meals. Despite the change, the program “still ‘forces’ me to eat a balanced diet,” Murray said. “Since the COVID-19 pandemic began, the food has not diminished in quality and quantity one bit. I don’t know how they do it; it’s a miracle.”

The pandemic brought “rapid and significant changes” to the program last spring, according to the organization’s executive director, Stephanie Archer-Smith. Requests for services from Meals on Wheels of Central Maryland tripled from 25,000 a week to 75,000. Delivered meals are provided to those who cannot shop and cook for themselves, regardless of age (though the vast majority are older adults). Recipients are asked to pay a modest fee based on a sliding scale.

“Every day we were getting more and more calls from people saying, ‘Can you help us?’” With senior centers closed and shelter-in-place orders, she said, “seniors were more vulnerable.”

Archer-Smith never considered failure. “For me, it wasn’t about if we could still do it, but how we could do it.”

Her staff geared up for greater production, churning out boxed frozen meals instead of the usual hot and cold offerings.

Because packing meals became more labor-intensive, many newly recruited volunteers worked shifts from before sunrise to after sunset. In addition to now weekly deliveries of meals outside the clients’ doors, the organization also calls clients a couple of times a week to make sure everything is relatively copacetic.

The famous program known as Meals on Wheels got its start in the United Kingdom during the early 1940s. Nazi Germany’s “Blitz” bombing of English cities destroyed many people’s homes and therefore the ability to cook their own food. In response, a group called the Women’s Volunteer Service for Civil Defense provided food for them.

The first U.S. home-delivered meal program began in Philadelphia, in January 1954. Margaret Toy, a social worker in Philadelphia’s Lighthouse Community Center, pioneered a program to provide food that met the dietary needs of homebound seniors and other “shut-ins” in the area.

Today’s volunteers are no less heroic. The spread of COVID-19 resulted in Vince Bittinger being laid off from his administration job in finance at Johns Hopkins Hospital.

“I couldn’t just sit around at home with nothing to do,” said Bittinger, 58, a resident of Dundalk.

So, since late April, while “looking like mad for another job,” he has also volunteered for Meals on Wheels. He goes two or three days a week to the “kitchen” in Baltimore, picking up food prepared there, packing it into his Chevy Captiva SUV, and making eight or nine deliveries a day to the program’s mostly aging residents of the area.

“The people I make the deliveries to are really grateful. It’s wonderful to get their thanks,” Bittinger said. “I’ll keep doing the deliveries until I get another [paying] job,” he said.

This fall, Meals on Wheels of Central Maryland is serving up to 3,500 people each day — double the number of pre-pandemic clients.

“We surpassed 1.9 million meals produced, packed, and delivered in the last fiscal year,” Archer-Smith said. That includes special meals, from kosher (mostly in the Baltimore metropolitan area) to Korean (mostly in Howard County).

The program’s Baltimore headquarters currently has 105 paid employees, Archer-Smith said. About 1,200 of the usual 2,000 volunteers discontinued after the onset of the pandemic. But new volunteers like Bittinger, most over 50 years old, are slowly showing up again. “We still need volunteers” to hit the 2,000 mark again, she said.

The volunteer jobs include, among other tasks, delivering meals weekly from approximately 11 a.m. to 1 p.m. in Dundalk, Randallstown or Silver Spring; becoming a “substitute” delivery driver; grocery shopping for clients throughout central Maryland (flexible hours); packing
meals at the organization’s headquarters at 515 S. Haven St. in Baltimore; or making telephone “wellness” calls to check in on the program’s clients.

Saved from federal cuts
In 2017, the Trump administration threatened a full cut-off of the $3 billion federal Community Development Block Grant, which in part helps fund more than 5,000 community-based Meals on Wheels programs nationwide. Mick Mulvaney, President Trump’s budget director at the time, said Meals on Wheels was one of many block grant-supported programs “just not showing any results.”

In response, Meals on Wheels said its members had served some 219 million meals “to more than 2.4 million seniors from 60 to 100+ years old” in 2016 alone. A Washington Post story on the proposed ending of the federal aid reported that studies had found the home-delivered meals “significantly improved diet quality, increased nutrient intakes and reduced food insecurity among the participants.”

In addition, one study found that those receiving daily meals from the program experienced fewer falls and hospitalizations. The program, which created or maintained 330,000 jobs between 2005 and 2013, “helped seniors stay at home and out of costly nursing facilities,” which was “keeping the lid on healthcare costs,” the Post article said.

In the end, “community pushback” saved federal funding for the program, Archer-Smith said. But she added that while costs have tripled, the “flat funding, which is at the same level it was six years ago,” now makes up only 40% of the Central Maryland program’s $12 million yearly budget. The rest of the operating budget comes from “public support through fundraising,” with a small amount contributed by recipients.

About 10% of meal recipients “are too poor to pay anything” for the meals, while the rest make a nominal donation based on income, Archer-Smith said.

On a personal note, Baltimore resident Archer-Smith, 58, who became executive director eight years ago, acknowledged that her work today seems more important than ever.

“I’m learning more every day about the link between isolation, nutrition and aging. The more we know through research in those areas, the greater will be the impact on the cost and ways to foster healthy aging.”

Her ultimate goal, Archer-Smith noted, is “to make a difference; make it a little better for those in need.”