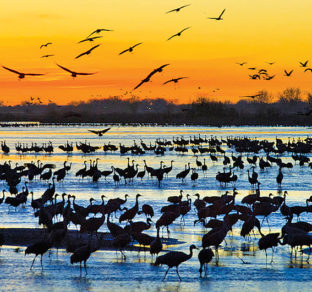 During a vast annual migration, 80% of the world’s cranes gather on the banks of Nebraska’s Platte River on their way to Arctic nesting grounds. Tourists and wildlife photographers also flock to Nebraska every February to April to admire the sights and sounds of hundreds of thousands of sandhill cranes. Photo by Nebraska Tourism
PRINT 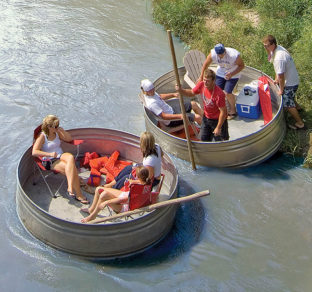 Nebraskans enjoy a tranquil day of “tanking” downstream. Floating in repurposed livestock watering tanks can be a leisurely way to get a closer look at the state’s wildlife and scenery. Photo by Rick Neibel/Nebraska Tourism
By Glenda C. Booth Posted on June 05, 2020

Editor’s Note: Given the worldwide reach of the coronavirus and the fact that COVID-19 cases are still rising in Nebraska, this is not the time to travel there, or anywhere, for enjoyment.

Please enjoy this article as armchair entertainment and for planning your future travel in healthier times.

In the Cornhusker State, corn may be at almost every turn, but there’s much more to explore.

Want to drift down a placid river in a steel tank? Watch birds strutting in a colorful courtship dance? Visit a sod house or study fine art? Nebraska’s got it.

The Platte River in Central Nebraska is nature’s stage for one of the planet’s greatest spectacles. From mid-February to mid-April, half a million sandhill cranes migrating north rest on the Platte’s sandbars and feed in the cornfields.

“I’ve traveled far and wide,” Jane Goodall once said, “and coming to Nebraska and seeing and hearing the cranes always restores my soul.”

Even non-birders are captivated by these gangly birds. From viewing blinds at sunrise, eco-tourists can watch the cranes awaken from sandbar roosts and jump like marionettes in a mating dance. Then, in a big whoosh, thousands ascend to the skies in one of the greatest migrations on Earth.

The Great Platte River that snakes across the state was a formative influence for human civilization, too. Indigenous people lived along the river long before Europeans arrived.

It was a major route for pioneers going West and later for the Pony Express, Union Pacific Railroad and today’s Interstate 80. The Lincoln Highway, America’s first coast-to-coast paved roadway, tracked the river.

Archway Monument over Interstate 80 in Kearney (locally pronounced “Car-knee”) honors the past with life-sized figures and exhibits. Listen to an audio guide about the personal stories of pioneers, watch a rider switch horses at a Pony Express station, and experience a thundering buffalo stampede.

The Museum of Nebraska Art in Kearney is housed in a 100-year-old former post office. Inside are 5,000 works by artists who were born, lived, trained or worked in Nebraska or who created art reflecting the state.

Study the art of automotive design (while remembering your high school dating scene) in Kearney’s Classic Car Collection, home to over 200 automobiles from different eras. There’s a 1959 Cadillac with its distinctive tailfins, a 1957 Mercury Turnpike Cruiser, a supercharged Shelby Mustang GT 350 and a recreated 1950s gas station and drive-in theater ticket booth.

Even older are the 1938 Rolls Royce Wraith Limo, two Pierce Arrows and a 1917 VIM Huckster Canopy truck. Its manufacturer, Touraine Company, claimed it could make 250 stops in a 20-mile radius in four hours, compared to a horse and wagon which took six hours to make 200 stops.

In nearby Minden, Nebraska, the centerpiece is the Pioneer Village (self-dubbed “Authentic Americana”) in the shadow of iconic grain storage silos. Opened in 1953, the 20-acre campus tells Nebraska’s story through a sod house, general store with bygone items, antique farm machinery, a working blacksmith’s shop, a telephone switchboard and the country’s oldest steam-powered carousel.

Two Pony Express Relay Stations are worth a stop at Gothenburg. In 1860 and 1861, after charging across the land for 60 to 70 miles, riders could switch mounts in two minutes flat and transfer the mail in a mochila, a knapsack that carried 20 pounds of mail.

Pony Express riders had to be willing to die, and orphans were preferred. One of the fastest riders transported President Abraham Lincoln’s inaugural address 2,000 miles in eight days.

The late television journalist Charles Kuralt called Nebraska’s Sandhills “one of the most beautiful areas of nothingness.”

Don’t take his term “nothingness” literally, though. The region’s 13 million acres of soothing, rolling grasslands are home to Buffalo Bill’s ranch and the largest railroad servicing yard in the world.

You can experience the placid beauty by “tanking,” a local term for floating down a river in a steel water tank for farm animals.

Buffalo Bill’s Wild West and Congress of Rough Riders of the World was anything but boring. At William Cody’s former ranch, now a historic park in North Platte, visitors can return to the Old West through videos of a rollicking spectacle of bronco riding, bronco busting, cow roping, gun battles and stagecoach attacks, a show that had 200 performers and 250 horses in the 1890s.

Still standing is Bill’s restored Victorian house that cost $4,000 in 1886. The wallpaper features one of his performers, Annie Oakley, a legendary woman who could shoot backwards on a horse.

A must-do in North Platte is taking in the eighth-floor, 360-degree views atop the Golden Spike Tower. Down below, thousands of trains crawl through Union Pacific’s 2,850-acre Bailey Yard, the world’s largest railroad classification yard.

The yard dates from 1869, one year after the Transcontinental Railroad was completed. Watching trains connect, disconnect and connect again is mesmerizing; it’s as if an invisible giant is playing with toy trains in the vast flatlands.

And for a bit of wacky Nebraska, there’s Carhenge in Alliance, a full-scale replica of England’s Stonehenge, but the Nebraska version is a series of 38 old cars painted gray.

Or try Grain Bin Antique Town near North Platte, with its 20 historic octagonal granaries full of antiques and yard-sale treasures.

In the state capital of Lincoln, the Indiana-limestone state Capitol building, 400 feet tall and topped by a 20-foot man sowing wheat and corn, dominates the skyline.

The Museum of Nebraska History covers 12,000 years of history, and the University of Nebraska State Museum of Natural History features Elephant Hall, with towering mammoth, mastodon and other skeletons.

Omaha, once dominated by cattle stockyards, is Nebraska’s largest city. It’s the center of the state’s transportation, insurance and agribusiness, and also home of Omaha steaks, Mutual of Omaha and billionaire Warren Buffett.

The Joslyn Art Museum, an art deco building of pink Georgia marble, has an outdoor sculpture garden and artworks by El Greco, Titian, Degas and Monet.

At the Durham Museum in a former train station, visitors can explore the Cornhusker Club car, which President Harry Truman used for his 30,000-mile whistle-stop tour in 1948. Exhibits highlight Native American, Omaha and ranching history. After your tour, enjoy a chocolate malt at its authentic soda fountain.

Check cdc.gov for current travel notices. Most travelers fly to Omaha and then drive west along I-80 and deviate off the interstate to various sites.

Omaha is a 17-hour drive from D.C. From Omaha, on the state’s eastern border, to the western border is about 455 miles. Amtrak’s California Zephyr (a daily train connecting Chicago and San Francisco) stops at five stations.