Off the beaten track in Northern Ireland 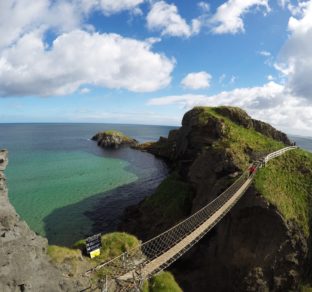 Tourists must watch their step while enjoying the scenery on the Carrick-a-Rede Rope Bridge near Ballintoy in County Antrim, Northern Ireland. Photo by Maneer/shutterstock.com
PRINT 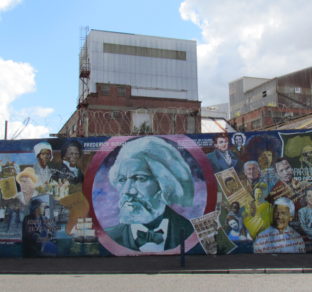 The city of Belfast is bisected by 100 walls known as "peace lines." Built after the Northern Ireland riots of 1969, the walls separated Catholic Nationalists from Protestant Loyalists. Photo by Imbiblio/Flickr
By: Don Mankin Posted on: December 13, 2019

The story of Northern Ireland is a tale of natural beauty and convivial people bound up in a singularly dark and bloody history.

For a week and a half last summer, my wife Katherine and I traveled through Ireland — from Dublin, through Game of Thrones country along the windy coast of Northern Ireland, to the Wild Atlantic Way on the west coast and back to Dublin.

The trip — my fifth visit to Ireland — began on a sunny day in Dublin, where we walked around the city, taking in the sights along the River Liffey.

We got our first Irish history lesson at the excellent museum in the General Post Office, the site of the Easter Rising in 1916, which marked the modern beginning of the long, contentious path to Irish statehood.

After two nights in Dublin, we joined the “Magnetic North Adventure Tour” by Vagabond Tours of Ireland, my host on this trip. Vagabond describes this as their “most active and off the beaten track tour,” an apt description indeed.

We traveled for a week through northwestern and Northern Ireland in a van, led by our guide, Aidan, who (when he wasn’t leading the way up a steep, muddy, rocky trail) filled us in on the bloody turmoil that shaped the history of the region and of the entire island.

Decades of violence between Irish Republicans and British Unionists began in the 1960s and finally ended with a peace agreement between the British and Irish governments in 1998. More than 3,500 people in the small country of 1.5 million lost their lives in a 30-year period of unrest known as “the Troubles.”

The walls of Belfast

The painful history is most visible in the two main cities of Northern Ireland.

In the capital city of Belfast, we took a Black Cab tour of the murals on both sides of the Peace Wall — a forbidding, 2,625-foot-long structure of cement, chain link and razor wire that separates the Protestant, Unionist side in the Shankill section of the city from the Catholic, Republican side along Falls Rd.

Our tour guide led us to Bombay Street, where the Troubles finally reached Belfast after several days of violence in Derry (or Londonderry, depending on which side of the Unionist/Republican divide you fall).

The 1969 riots between Catholic residents and Protestant residents and police lasted four days, killing eight people and injuring almost 800. More than 150 houses were burned, and 275 businesses were destroyed — about 80% of which were Catholic-owned.

After the riots, the government built more than 100 “peace walls” that still stand throughout the country.

I was traveling in Europe in 1969 on an extended summer vacation and happened to be in Belfast on August 15. I’m sure that some of the smoke I saw billowing up into the darkening sky from the upper deck of the overnight ferry to Glasgow was from Bombay Street.

It was a very emotional moment for me on this trip to recall that 50-year-old adventure, the first trip on my own in a foreign country, essentially marking the beginning of my traveling life. (You can read about it in my story, “Belfast: Bloody Past, Hopeful Future” on my website).

Two days later, my wife and I took a walking tour along the ramparts surrounding the beautiful, weathered city of Derry. We stopped for several minutes at a spot overlooking the Bogside, where most of the violence occurred.

Almost everyone we talked to was concerned that Brexit might change everything and re-establish the hard border between Northern Ireland and the Republic.

I wondered if the strife was really over or just waiting for a new spark to light the fuse. Things are quieter now, of course, but there are still some diehards trying to stir up new “troubles.”

Although Ireland’s history is fascinating and compelling, most of our tour focused on the country’s pristine scenery, which must account for at least some of the over-the-top popularity of HBO’s Game of Thrones, which was filmed in the area.

Among the highlights were the Giants Causeway and the Carrick-a-Rede rope bridge, as well as the views of sea, fields and bog along the way.

We also stayed in a couple of grand 19th-century manor houses — the Beech Hill Inn near Derry and Mount Falcon in Mayo. To this city boy, they looked and felt like castles, surrounded by woods, pathways, ponds and fields with horses and sheep. We even spotted rabbits just outside our windows at the Beech Hill Inn.

The trip was quite active. We did something physical — and often challenging — almost every day, including a choppy three-hour jaunt in kayaks along the coast.

We also took an eight-mile bike ride along the Great Western Greenway, a windy bike path on the Wild Atlantic Way from Newport to Westport.

One of our hikes was especially memorable, a wind- and rain-swept hike to Horn Head, a lookout point for German subs during WWII near Dunfanaghy, a former fishing village on the Northwest coast. The winds were so strong I felt like a CNN reporter in a hurricane.

The history, weather and breathtaking beauty will not come as a surprise to most readers, but the great food might.

I ate three of my top-five all-time best meals on this trip — the oysters at Nancie’s in Ardara; the seafood chowder at Lizzie’s Diner in Dunfanaghy; and the fruit scone at the cafe in the visitors’ center at Ballycroy National Park.

I’m already considering a sixth trip to the Emerald Isle. The warmth of the people, the beauty of the land and sea, and its powerful history keep pulling me back.

The approximate cost of this Vagabond tour, not including airfare, is about $2,000, depending on the conversion rate for the Euro. Airfare from D.C. to Belfast starts at $800.

For more details and photos see the blog on the author’s website, adventuretransformations.com.